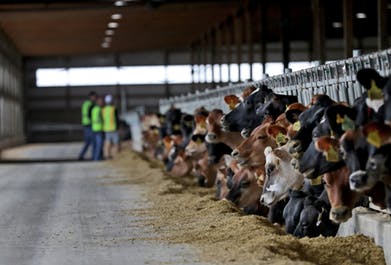 DAVID JOLES - STAR TRIBUNE New USDA data shows that the rate of small dairies that are closing is accelerating -- but so is production of milk. That’s one effect of the growth of large dairies like this one operated by Riverview LLP near Murdock, Minn.

This past week as I was going through some of my old writings, I came across an Eastern Milk Producers magazine from August 1975. This magazine always carried an article identified as the President’s Post. I wrote an editorial for this magazine for five years (60 issues).

In August 1975 my article was entitled, “How Much More Can Dairy Farmers Endure?” In this article I pointed out the severe disparity that dairy farmers were paid for their milk as compared to the high prices for all the items they needed on the farm.

I referred to the old saying: Farmers buy retail and sell wholesale!

This pricing gap was widening and I asked how much longer will dairy farmers be able to withstand this increasing burden. I said that something must be done. Does that sound familiar?

I attacked the old pricing system called the Minnesota/Wisconsin series price (M.W. pricing system). I pointed out how I felt this pricing system could be manipulated. Later on, while I was on the RCMA Board of Directors (Regional Cooperative Marketing Association) I urged the organization to investigate the M.W. series. I was told that RCMA did not have the funds to do what I suggested.

So being a young man, I set out on my own to see what I could uncover.

The main thrust of the M.W. was to determine how much milk was classified as Class B and what the price was. This milk was not to be used for Class I milk (for bottling). You see, the Class B milk commanded a much lower price than was used in the national pricing system.

I talked to dairy farmers, milk co-op directors, private milk handlers, and maybe more importantly, I talked with various milk truck drivers. There is more I found out, but space limits.

Please remember the Class B milk was not allowed to be used for food purposes.

1) I found out that many truckers were picking up both Class B and Class A milk with the same truck.

2) I talked to plant managers that allowed Class B and Class A milk to be placed in the same vats.

3) It’s easy to see the extra money handlers could make on this procedure.

4) As years went on, a small amount of milk was being reported and certainly the series was finally eliminated.

But more in the late part of 1979 to 1980, as President of Eastern, I called a meeting of co-op leaders to be held in State College (Penn State). Our aim was to raise the support price on dairy products up to 85% of parity. Actually, this was accomplished by actions taken by the US Secretary of Agriculture and the US Congress. We accomplished what we set out to do.

However, we didn’t listen to Jim Homan, the fine manager of the Interstate Milk cooperative. Jim said, and now 47 years later I can still quote his words, “Boys, you’re going to get the price too high and you will see overproduction.”

In subsequent years Congress continued to lower the support price until it reached $9.90 per cwt. and then they finally abolished the support price completely. Here we are, 44 years later, wandering around, and the people in Washington are still ignoring the plight of our family dairy farmers and their need of a new pricing formula and a reasonable supply management program when needed.

The sad thing is, thousands of consumers over the years asked the question, “Why can’t our dairy farmers receive a fair price to give the farmers a chance to survive?” Believe me, these consumers are way ahead of the rest of the field. If Congress felt in 1980 and 1981 that farmers needed a $13.10 support price, what were they thinking when they let it go down to $9.90, and abolished it?

This editorial is quite lengthy, but we’re trying to show the farmers how they have been misused time and time again. This is why we need to update the Specter-Casey bill, S-1640, and get it reintroduced in Congress. The main thrust of this editorial is to illustrate that some of us knew in the 1970’s that the pricing mechanism to price milk was not correct, and many of us are saying the same thing today. Think of the dairy farmers who have been forced out of business by lack of appropriate action either by the USDA or the US Congress.