5 takeaways from the financial records of a controversial dairy-promoting nonprofit that gets its money from farmers – eDairyNews
United States |5 septiembre, 2019 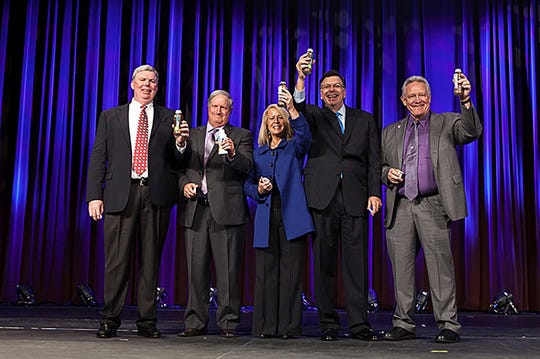 As dairy farmers throughout Wisconsin and the nation continue to struggle with declining consumption and milk prices, executives of a Chicagoland nonprofit funded by the farmers continue to get rich.

Dairy farmers are required by federal law to pay 15 cents per hundred pounds of milk sold into a checkoff program administered by the U.S. Department of Agriculture. Ten cents of the checkoff money goes to regional marketing/promotion programs, and the remaining nickel goes to national programs.

A Journal Sentinel review of financial records from Dairy Management Inc., a nonprofit based in Rosemont, Il., shows that it received about $155 million of the checkoff cash in 2017.

It uses the cash to promote dairy products through a variety of marketing efforts including advertising and partnering with the NFL, major retailers and others.

The Journal Sentinel interviewed farmers who pay the checkoff and expressed anger with the salaries paid to leadership, as dairy farmers struggle to make ends meet. Subscribers can read the full story here.

Here are five takeaways from the investigation:

In that same year, the top 10 executives at Dairy Management were paid more than $8 million in salary and benefits.

Dairy Management’s CEO is paid more than others

Gallagher’s 2015 and 2016 pay packages were more than double the median paid to CEOs at large nonprofits in those years, according to Candid, a group that analyzes nonprofits.

There are about two dozen federally mandated checkoff programs requiring farmers to pay in to help market their commodities. The programs cover all kinds of producers, ranging from Christmas tree farmers to cattle ranchers.

All told the programs collected $895 million last year, with the dairy checkoff programs bringing in about $420 million or nearly half the total.

The checkoff calculations vary from commodity to commodity, but any way you cut it, dairy farmers pay more than beef and pork producers.

Dairy Management has formed expensive partnerships with the NFL and others

In recent years, Dairy Management has forged partnerships with a variety of companies and entities in the hopes of increasing sales. Per-capita milk consumption in the United States has fallen, or remained flat, every year since 1985.

Among its partners is the NFL, which has received $25 million from 2013 to 2017 for a variety of efforts, including promoting physical fitness and healthy eating habits among students.