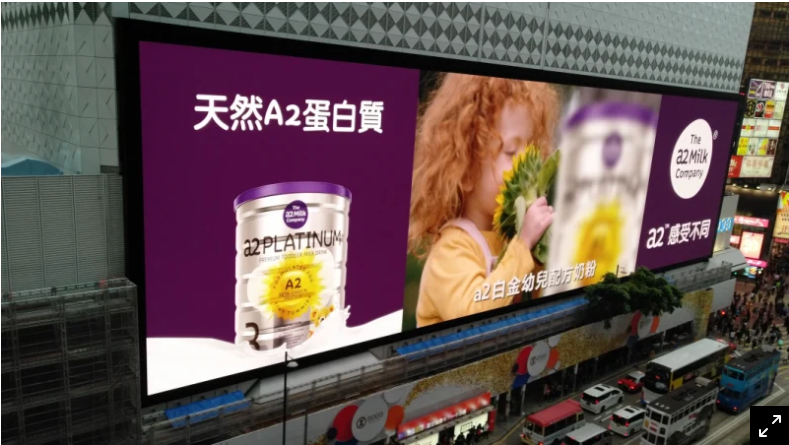 Billboards in Hong Kong advertising a2 infant formula. The company says it will double its marketing spend in China.

a2 Milk has been unfazed by the deepening trade stoush between China and the US, China’s crackdown on the multibillion dollar e-commerce sector, and the dairy crisis engulfing Australia, reporting record half-year profits.

A burgeoning US and China market, coupled with fresh milk sales growth in Australia helped propel the company to a record net profit in the six months to December 31 to $NZ153 million ($147 million), up 55 per cent.

Company revenue grew by 41 per cent to $NZ613 million while earnings before interest, tax, depreciation and amortisation (EBITDA) was up 53 per cent to $NZ218 million.

Revenue in the second half is expected to grow broadly in line with the first half, but chief executive Jayne Hrdlicka has given a softer EBITDA and net profit outlook driven by an increased spend on marketing campaigns and employee expenses.

“We know brand awareness in China still has scope for growth and that our consumers – once they’ve tried our products – are typically some of the most loyal and committed in the category.

“As a consequence, marketing investment in second half of FY19 will be approximately double the first half, with the majority of that going to brand building activities in China.”

Ms Hrdlicka said the company was not expecting revenue in China to dip at all in the face of new e-commerce laws that were introduced to the country last month.

The new legislation requires e-commerce platforms to protect consumers’ personal information, their rights and interests, and will force daigous to register as import retailers and pay tax.

“We think they bring important protection to consumers and they’re very consistent with laws for other markets around the world … it lifts confidence in consumer about the channel.”

Despite recent analyst reports suggesting China may amend the rules and requirements for overseas sellers of infant formula, Ms Hrdlicka said a2 was ready to weather any changes noting that it was unlikely to happen for several years.

She said the company was already working behind the scenes on changes to its infant formula.

“When formula changes come into play, which we don’t expect to come in for a few years, there would be a very strong lead time for companies to transition to the new formulation requirements … and regulators are very conscious of the fact that you don’t want to disrupt the market for one of the most vulnerable sections of the population.”

a2 has also partnered with major milk processor Fonterra to build milk pools in Victoria and New Zealand, in the face of a national milk pool at risk of falling to a two-decade low on the back of high feed and water costs.

Ms Hrdlicka remained tight-lipped on the company’s inventory across the world, particularly in the UK and US as the two countries grapple with an increasingly shaky trade environment.

A2 will not pay a dividend.