Want the lowdown on European markets? In your inbox before the open, every day. Sign up here.

Ditching oilseed crops for peas, preparing to cut herds and splashing out on tractor gadgets. That’s what European farmers are doing to try to cope with a worsening fertilizer crisis.

The lengths they’re going to in order to apply less of the nutrients vital for growing staples like wheat and rapeseed highlights the continued threat the crunch poses to food output. Many of Europe’s fertilizer plants have closed as Russia’s war in Ukraine squeezes supplies of gas that nitrogen fertilizer is derived from.

Some farmers secured fertilizer for this year’s harvest before prices soared, but now face much bigger bills as they start planting for next year’s crop. Plus, high energy costs are making it more expensive to run tractors and dry grain, risking more food inflation. 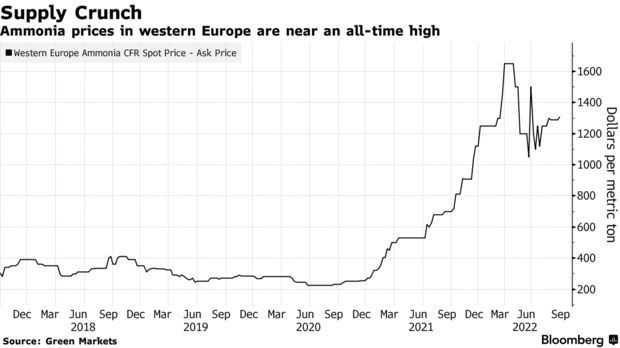 Here’s how farmers are trying to cope:

The European Union’s grain output shrank 9% this year as a drought ravaged corn fields. While it’s too early to know how plantings for next year’s harvest will fare, farmers will likely shift some land to crops that need less fertilizer, Strategie Grains analyst Vincent Braak said.

One example is Poland’s Nowak, who’s shunning rapeseed that typically covers a third of his farm and opting for less-intensive legumes, like peas. Farmers in the UK and Finland also said they’re sowing more legumes.

European wheat and barley is mainly sown in autumn and needs most fertilizer in spring to meet requirements for use in bread and beer. If farmers don’t have enough nutrients or grain prices are too low to justify the cost, they may raise the crops at a lower quality for animal feed.

“Do we just put fertilizer on the best crops and leave the rest with less?” said Max Schulman, a farmer in Finland. “It will be much harder to predict which way the European crop will go.”

The crisis is also a headache for livestock farmers, as many apply fertilizer on forage or pastures for animals. Because meat prices have underperformed grains, grazing land may see a steeper drop in usage, said James Webster, a senior analyst at UK-based adviser Andersons Centre.

Welsh dairy farmer Aled Jones has bought three-quarters of his needs for 2023 pastures — at triple last year’s price — and hopes to book the rest later. Cows produce less milk without the proper diet, and he’s worried he may have to sell some of his 500-strong milking herd if feed yields fall too far.

British farmer Richard Bramley cut nitrogen fertilizer use in the past two seasons, and hopes new equipment will help reduce usage further. He spent about 23,000 pounds ($24,950) — subsidized by the government — for a tractor-mounted sensor that detects plant health and only applies nutrients where it’s needed most.

Bramley booked supply in May to ensure enough for next year, but is still waiting for some to arrive.

“It’s very expensive, but if I’m going to grow a crop, I need to make sure I can grow it right,” he said.

Spending a lot more on fertilizer is one problem, another is if it even arrives on time. Finland’s Schulman booked supplies for spring, but is unsure when it will come with tight availability across Europe.

Next year’s EU fertilizer usage hinges on farmers stocking up now, and purchases are 30% to 50% below last year, Fabien Santini, deputy head of the bloc’s DG Agriculture unit, said earlier this month.

“They still have time,” he said. “Of course, the closer you get to the moment you apply the fertilizers, the more risky it is to wait to buy.”