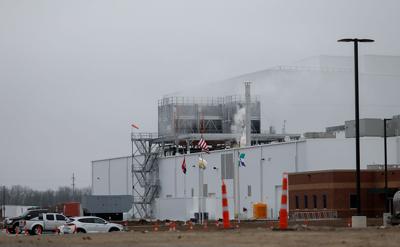 The Aurora Organic Dairy plant on Waco Drive in northeast Columbia is scheduled for a grand opening April 17. JEFFREY ZIDE

Aurora Organic Dairy is set to open its Columbia plant later this spring, and has already hired 85 employees, with more to come.

“As we continue to commission the plant and its various manufacturing lines, we plan to hire additional staff,” Aurora spokeswoman Sonja Tuitele said. The plant expects to have about 100 employees by some time this summer, Tuitele said.

Aurora said in a news release Friday that it will have a grand opening at 10 a.m. April 17 at its plant, 4525 Waco Drive.

The Columbia City Council, as part of its negotiations to bring Aurora to town, included in its agreement with the company a request that it meet certain employment benchmarks, according to previous Missourian reporting. It called on Aurora to hire at least 130 workers within five years and to make a concerted effort to hire a diverse workforce with at least 10 percent African Americans.

Aurora Organic Dairy acknowledged the request and has confirmed with the city that it intends its hiring practices to be consistent with the demographics of Columbia, Tuitele said.

“To date, approximately 20 percent of our Columbia milk plant employees are minorities, and our African-American workforce exceeds the 10 percent target,” Tuitele said.

The vast majority of new employees at the plant have been hired from the Columbia area, Tuitele said.

“In certain instances we have had to recruit outside of Columbia to find the right skill set for a specialized job, but that is only a small handful of employees,” Tuitele said.

The plant has hired for an array of different positions including “all types of manufacturing positions, including plant management, production and warehouse staff, maintenance and lab technicians,” Tuitele said.

Tuitele credits The Missouri Job Center in Columbia for helping work candidates through the application process, and she said the company is “very pleased” with the quality of candidates hired from Columbia.

Aurora Organic Dairy already has plants in both Colorado and Texas, making the Columbia plant is third. It will be responsible for manufacturing and distributing dairy products eventually to all 50 states, alongside Aurora Organic Dairy’s Platteville, Colorado, plant.

“Where there is overlap of products bottled in Columbia and our Colorado plant, we would typically ship east from Columbia and west from Colorado,” Tuitele said. “… Our customers will benefit nationwide with a wider array of products offerings.”

Aurora believes its plant will create jobs for other local companies, too.

“We are creating additional work for local organizations that support our milk plant, including local utilities, trucking and distribution and maintenance companies, and administrative support organizations,” Tuitele said.