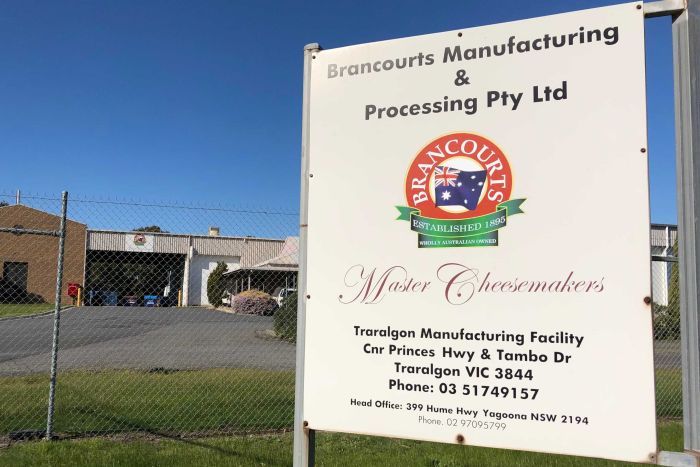 The Brancourts dairy processing company has gone into administration and there will be an immediate impact on jobs at its two factories in Victoria and New South Wales.

A spokesman for administrators PKF Australia said the sales and manufacturing arm of Brancourts had been placed in voluntary administration.

The administrators said they were expecting a high level of inquiry.

The Brancourts family business has made cheese for Australian consumers since 1895, and its brand of cottage cheese, sour cream, haloumi, yoghurt, and condensed milk are common fixtures on Australian supermarket shelves.

Thirty-three full-time workers and four casuals have lost their jobs at Brancourts’ Traralgon processing site in the Latrobe Valley.

About 20 employees have been stood down at Brancourt’s Hunter plant at Hexham, near Newcastle.

Victorian Agriculture Minister Jaclyn Symes said the Government was working with the administrators and the Federal Government to ensure all employees received their full entitlements.

The Victorian Government was not given any notice that the company was about to go into administration.

«We were on site last Friday on a regular visit and were notified by members and by the company of the voluntary administration,» Mr Courtney said.

«They notified the employees that they would be paid until Wednesday, being today, when the administrators take over.»

Mr Courtney said workers were sad to be finishing up with the company.

«We’ve had an industrial agreement on site at Hexham for around five years, we only just renegotiated the agreement last year,» he said.

«The company predominately employs people directly and they were also making a cream product that was being exported to Japan.»

United Dairyfarmers of Victoria President Paul Mumford said the administrators were confident of finding a new owner for the business.

«Essentially they are confident of on-selling the business and hopefully get the business back on track and salvage some of the jobs,» he said.

Mr Mumford said administrators PKF were quietly confident of re-employing the workers, but would need to work swiftly to make that happen.

«We have seen stress at the farmer level for numerous years and it’s now being transferred to the processing sector, and with the closure of Dennington and Tongala in Victoria the manufacturers are hurting,» he said.

Mr Mumford said there had been a 10 per cent decrease in milk supply nationally due to the number of farmers who have shut their doors.

«Milk is becoming harder to get and we’re seeing that in the current year’s milk price,» Mr Mumford said.

«It’s one of the highest we’ve ever seen at farmer levels, purely because of competition.

«With milk at $7 per kilogram milk solid, I just doubt the company can pass that on to their customers.»

Pressure on industry
The Traralgon workers who have lost their jobs will have access to the Latrobe Valley Authority’s workers transition service, set up after the closure of the Hazelwood Power Station.

«Within Victoria we’ve had four or five dairy factories close,» he said.

Last month, Nestle announced it was closing its dairy factory at Tongala, in northern Victoria, and earlier this year Fonterra announced its Dennington plant in south-west Victoria would close.

The Brancourt family business was started in the 1895 by Julien and Alice Brancourt, the great-grandparents of current owner Julie.

The pair emigrated from France and bought a 16-hecatre farm in North Bankstown.

When her husband was sent to fight in World War I, Alice expanded the business and added brie, camembert and cottage cheese to the manufacturing line.