Butter | Australians are eating more cheese, butter and yoghurt, and Timboon is milking the trend 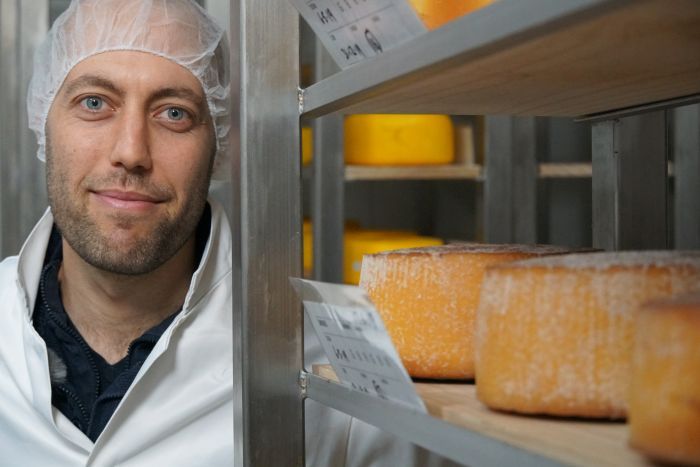 «This is the romance room,» jokes Simon Schulz, pushing open the coolroom door.

Rich, smoky aromas waft out of the cheese maturing room. Batches of organic Feta and Havarti — some smoked, some washed — sit developing on racks, each carefully labelled.

«We’re looking at $60 a kilo for this cheese, which is on the higher end,» the organic dairy farmer and cheesemaker said.

«But people are willing to pay it for organic cheese,» Mr Schulz explained.

The value of deli cheese sales surged 7.4 per cent, butter 7.3 per cent and yoghurt 3 per cent.

«Consumers are actually buying more [dairy] per capita, and that is a contrast to a lot of other developed markets where per capita consumption is falling,» Dairy Australia senior analyst John Droppert said.

But while the domestic dairy market is growing in volume and value terms, the amount of milk being produced is actually dropping — largely due to drought.

Production fell about 8 percent for the season just gone, Dairy Australia said, and is expected to fall another 3 to 5 per cent this year.

Just a third of dairy farmers have a positive outlook for the year ahead.

«Regulations around infant formula are one source of disruption, as are trade disputes,» he said.

«It could create disruption, and any market hates volatility.»

And for most dairy farmers, who sell their milk to major producers, fancier consumer tastes do not translate into more money.

«Making specialty cheese is not for everyone,» Mr Droppert said, adding that 70 per cent of milk production is still collected by major milk companies.

«A lot of those big players are also getting involved in specialty cheese, flavoured milk, special yogurt, all things that add value, and for that they do need high-quality milk.»

Adding value is something Mr Schulz’s family has been doing for decades, and the boutique offerings have helped reshape the dairy-dependent town into a foodie economy.

«Forty years ago we made the call to process ourselves and therefore demand the price that we think our product is worth,» Mr Schulz said.

«Since my grandfather started his first cheese factory, other value-adders have seen the success.»

In addition to the Schulz family’s organic dairy business, the town, in Victoria’s Western District, boasts an ice-creamery, brewery, distillery and a pick-your-own berry farm, and providore-style stores dot the main street.

«It’s certainly brought a lot of people to the area,» agreed Jimmy Davis, owner of Timboon cafe The Fat Cow.

Mr Schulz said the area enjoyed a more resilient economy as a result.

«When the dairy industry struggles like it has the last couple of years, the tourism industry can pick up that slack,» he said.