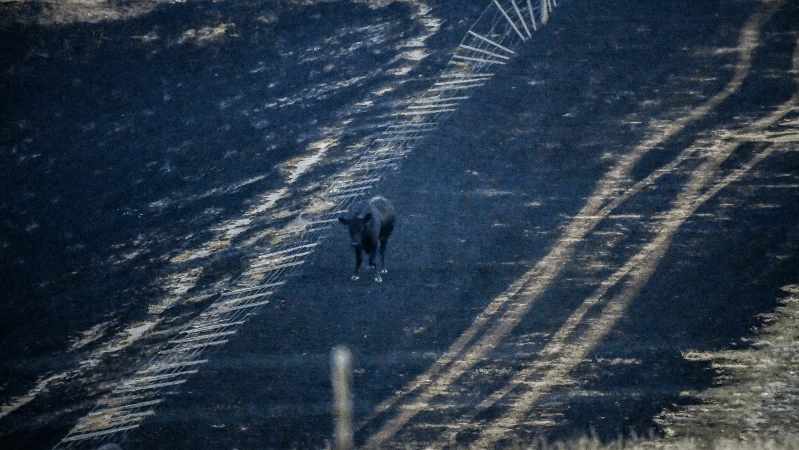 A cow at a burnt out farm. Many farmers have lost livestock or had to kill animals due to the fires.CREDIT:JOE ARMAO

Bega said it own facilities were not damaged in the fires, but there are concerns about supply from its farmers.

Bega Cheese’s shares fell 9.3 per cent to $3.92 on Monday, as the company and its dairy providers started to assess the damage caused by fires that have raged around the towns of Bega and Cobargo.

About 30 to 40 farmers had been affected in the area, said Shaughn Morgan, chief executive of the industry group Dairy Connect, with some reporting they had lost the bulk of their livestock.

Other farmers without power were struggling to milk their cows, while others were spilling their milk because dairy processors including Bega were unable to access roads to collect their produce.

Bega, the $844 million Vegemite owner, said its own milk receival and cheese factories had not been damaged in the fires and remained operating. The company was working with farmers and freight providers to ensure milk could be delivered and processed, it said in a statement to the ASX.

Andy Forster, a fund manager at Argo Investments, which owns almost 2 per cent of Bega, said the group’s dairy supply had already been affected by the drought which was curtailing production across the industry.

“This is another cruel blow really,” Mr Forster said.

“Already supply is relatively low with the drought and this is just another thing that tightens up milk supply and probably means farm gate prices have to go up again for those that are still out there and actually supplying.”

Mr Forster said it was not always possible for Bega to pass through higher milk costs to supermarkets, meaning their margins could be squeezed.

Farm gate milk prices are at record highs off the back of elevated global prices and demand as well as reduced local supply as farmers are hit with high feed costs and drought.

Dairy production fell to less the nine billion litres last financial year – the lowest volume since 1996 – and Dairy Australia expects production to fall another 3 to 5 per cent this year.

Mr Morgan, from Dairy Connect, said the priority now was to fully assess the damage in the area and provide feed to farmers who needed it.

The NSW Department of Primary Industries estimates about 3900 head of livestock have been killed or euthanised due to bushfires in the state this summer.

Agriculture logistics group GrainCorp said none of its infrastructure had been impacted, however, it was unsure about the extent of damage to farmer customers.

«We will continue to monitor the situation and work with our grower customers,» a GrainCorp spokesman said.

The ASX-listed Treasury Wine Estates said there would be fruit lost from some of its growers in the Adelaide Hills wine region after the area was hit by fires before Christmas, which it is was still assessing.

The damage was «not significant in the context of the loss suffered by other wineries and vineyards in the region,» a Treasury spokeswoman said.

«We are taking action to provide support where we can to growers who have been affected.»

Meanwhile, the cost of damage to home and other property continues to rise. The Insurance Council of Australia said on Monday that insurers had received more than 6000 bushfire insurance claims, worth an estimated $431 million.