Bega | Bega trying to make best of a bad situation

But with its boosted milk intake and the price of retail dairy products on the rise there are also opportunities for the diversified processor.

Along with the weather and how to maximise earnings on whatever milk it can secure from farmers, Bega management will be keeping a close eye on the fate of the Lion dairy assets and on Fonterra’s future in Australia in the next few months.

Fonterra is yet to make its plans in Australia clear but has flagged intentions to pull back on overseas operations and focus more on its home base.

The Kiwi dairy giant has already lost so much milk supply in Australia that it has closed the Dennington plant in Victoria and has others running below capacity.

Japanese brewer Kirin’s sale of its Lion dairy and drinks business could also present opportunities for Bega – such as a possible role in managing plants and milk supply.

China’s Mengnui Dairy – a potential buyer of the Lion business before its $1.5 billion bid for Bellamy’s – learned from its Burra Foods acquisition that managing plants and milk supply is not straight forward.

It is understood UK-based multinational PZ Cuzzons has been trying to sell organic yoghurt brand five:am but interest so far is falling well short of the $80 million it paid for the business in 2014.

While there might be light at the end of the tunnel, Bega faces another challenging 12 months.

Dairy manufacturers once again offering a farmgate milk price well in excess of what it should be under normal circumstance
— Belinda Moore, Morgans analyst

Morgans analyst Belinda Moore says things could get worse before they get better; weak full-year results had underlying net profit after tax down 12 per cent to $38.3 million.

This was in line with downgraded guidance but Morgans was unimpressed by the performance of Bega Foods, which includes the Vegemite and peanut butter brands, and Bega’s stretched balance sheet.

Ms Moore warned investors that Bega faced a tough fiscal 2020 and the Bega management agrees the challenging conditions will continue.

“Falling milk supply and excess manufacturing capacity are continuing to cause fierce competition for milk and is seeing dairy manufacturers once again offer a farmgate milk price well in excess of what it should be under normal circumstance,” she said.

On a positive note, Ms Moore said retail prices for some dairy products were on the rise and that could help Bega pass on some of the higher cost of milk.

The biggest positive for Bega last year was that it boosted milk intake by 41 per cent to a company record 1.06 billion litres – thanks in part to the $250 million acquisition of the Koroit processing plant in western Victoria.

The Australian Competition and Consumer Commission forced Saputo to jettison Koroit as part of its $1.3 billion Murray Goulburn acquisition in 2018. Saputo guaranteed Koroit would be supplied with 300 million litres of milk a year until July 2020 under sale terms to Bega.

While Morgans has a hold on the stock, Bell Potter has it as a buy with a target price of $5.50.

Bell Potter saw plenty of upside in the wake of the full-year results based largely on the drought in eastern Australia breaking sooner or later.

To me there almost seems an inevitability about Bega becoming a target at some stage
— Mark Topy, Select Equities analyst

“We don’t believe the current operating earnings of Bega are reflective of what the business is capable of generating under more normal seasonal conditions,” analyst Jonathan Snape said.

The firm views Bega as a play on a return to normal rainfall and sees earnings growth from 2020-21 through the move to boost production of lactoferrin, a specialty protein used in health foods and infant formula. 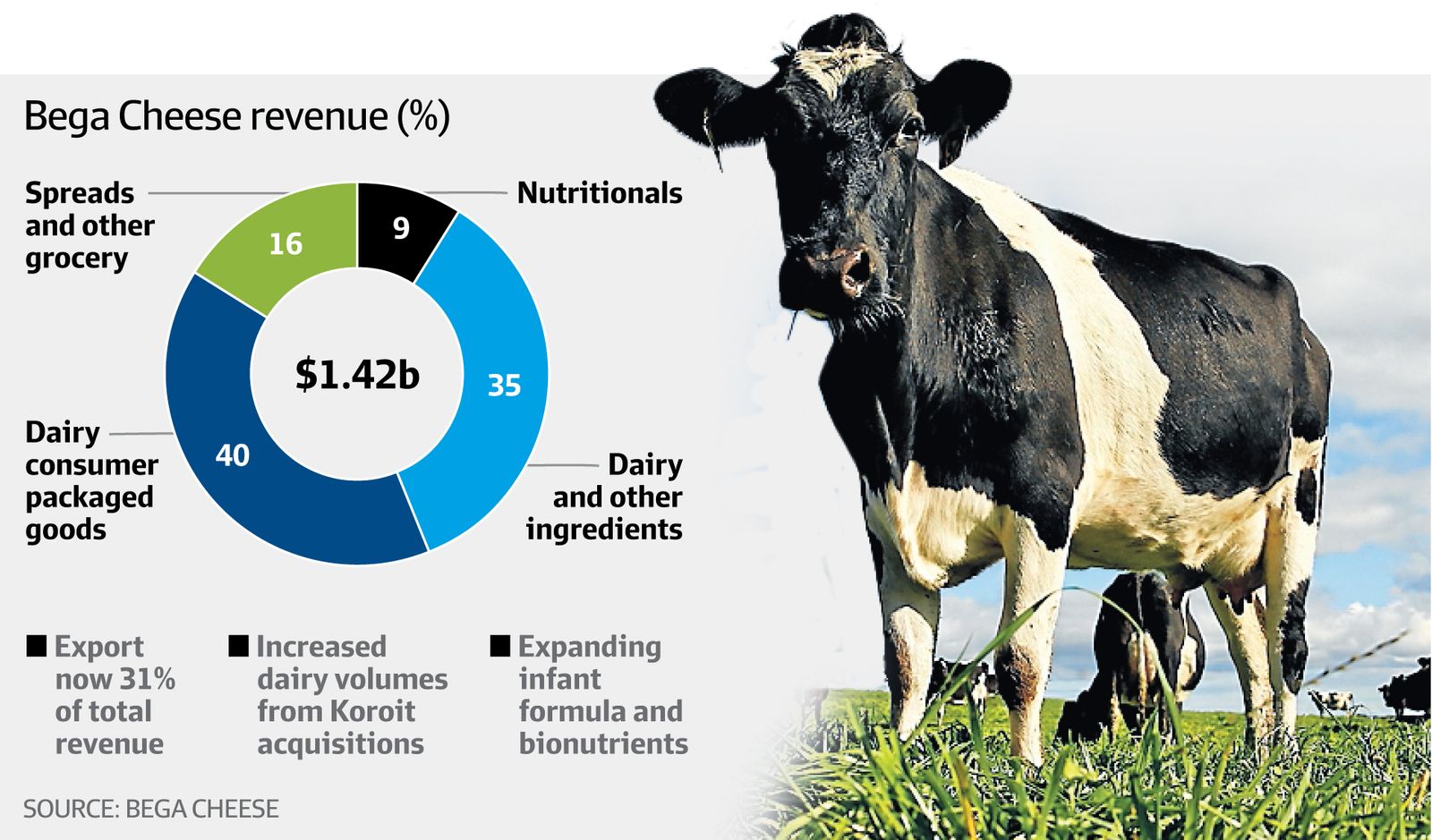 Bega chairman Max Roberts said the past year would go down as one of the most difficult in dairy farming history with communities under strain and Bega facing intense competition for a diminishing pool of milk.

Dairy Australia has forecast milk production to fall by up to 5 per cent this year because of drought, high water and feed prices.

Mr Topy said Fonterra had taken its eye off the ball in Australia with its milk supply estimated to have fallen from two billion litres to about 1.4 billion litres.

However, he warned big players like Saputo, with about two billion litres, and Bega faced competition from a host of other companies chasing significant volumes for high margin products.

Select Equities has a hold on Bega but expects it to emerge in a strong position once milk supply bounces back.

Mr Topy said the premium Mengnui was willing to pay for Bellamy’s, essentially an infant formula marketing company that relies on subcontractors, might spark renewed interest in Bega given its drought-affected share price, processing assets, retail footprint and solid brands.

«To me there almost seems an inevitability about Bega becoming a target at some stage,» he said.