It was by chance that Paragon Miniature Herefords owner Denise Warner and her late-husband Len started breeding compact-sized cows with stocky bodies and small frames.

About 16 years ago, Mr Warner encouraged his wife – the daughter of a New South Wales dairy farmer – to use some of their small acreage in the South West and “get back into cattle”.

“We purchased another small breed in 2006, before finding the miniature Herefords by chance a year later,” Ms Warner said.

“Initially, we only wanted three females from one of the establishment herds located in South Australia.

“But with the encouragement of the carrier who said there was room for a few more, we ended up buying the whole herd together with the Paragon name.”

The majority of the animals made the trek to WA, other than two cows and calves, which were taken to the property of Ms Warner’s sister at Long Flat near Port Macquarie, NSW.

These three cows had formed part of the original shipment of miniature Herefords to Australia from Canada in 1997.

Along with the first shipment came strict Federal government quarantine rules relating to animals, which were imported to Australia.

This was at the same time mad cow disease was detected in overseas cattle herds.

One of those cows lived to 23 years old and her daughter, which had been born while in quarantine, lived with her until that time – herself aged 21 years.

Today, although on different sides of Australia, Ms Warner and her sister run a successful stud together and share a passion for the protection and development of the miniature Hereford breed in this country.

At first glance, miniature Herefords could be easily mistaken for either of the traditional Hereford or Poll Hereford breeds with their distinctive, rich red coats and white faces, belly and markings.

Herefords Australia runs separate herd books for those animals, which have sufficient generations of only miniature genetics to qualify as miniatures.

The Australian Miniature Hereford Cattle Association was established in 1997, after the first importation for the development and genetic protection of the breed in Australia.

Once registered with Herefords Australia and the animals have qualified as miniature, they are issued a certification certificate stating their miniature qualification.

While size is important – under 121 centimetres for a cow and 129cm for a bull, both at two years of age and measured over the back, above the hip – the genetic heritage of an animal is more so.

If this is correct the chances of an animal being over the size restrictions is negligible.

Ms Warner said more of a concern was the animal’s breeding not being properly managed and therefore, the offspring getting too small.

“After all, they are still a beef animal and if allowed to breed on too small they would lose their beef attributes,” she said.

About a decade ago, the gene pool in Australia became “very tight” and Ms Warner decided to import semen from America.

Generations can be bred down by using a miniature bull over each generation to reach miniature status.

The origin of the miniature Hereford is the original English Hereford, which is a horned breed.

There were some poll genetics in the gene pools Ms Warner had imported from the USA.

These genetics, along with the full-size Poll Hereford cows and original genetic pool, helped widen the genetic pool across Australia.

They also heightened poll genetics to the extent a large percentage of animals are now born polled.

One of Ms Warner’s bull’s semen has been used in almost every State in Australia and she continues to improve genetics by introducing more into her bloodlines.

Her herd includes two females which are third generation – one generation shy of miniature status.

“I am getting there, but I still have a way to go,” Ms Warner said.

“To reach miniature status you have to have four generations of no full-sized animals.

“For me the biggest problem is breeding female calves, as it is only females that are of any use in a breeding program of this kind.”

She added that “improving genetics didn’t happen overnight and took a long time in cattle”.

“People could spend hours and hours studying genetics and these days, with all the advances in DNA, it is just incredible how in depth you can get in analysing traits.

“Almost all aspects of an animal’s future life can be analysed these days with DNA including growth, food conversion, birthing ease and birthing size etcetera.

“I am now in a situation where I have four or five first and second generation females that I can use for breeding, so I will be gradually getting rid of some of my big ones.

When Ms Warner first moved to Waroona the soil on her property was “basically just sand”.

And while it has improved to become pasture, the land is still not strong enough to carry larger cattle and is more suited to the smaller breeds.

Among the advantages of running smaller – as opposed to larger – animals on smaller properties is the difference in food consumption.

Ms Warner said a paddock with only miniature animals would go through one roll of hay compared to the larger breed, which can consume two to three rolls at the same time.

She said the full-sized animals were “just as placid and gentle” as the smaller ones and in the mixed herd paddocks the “small ones would push the big ones around”.

There are two calving periods at Paragon – the first between March and May and the second in August.

Most calving takes place in the autumn period, whereas the spring period is mainly the dribblers, who perhaps have not taken to artificial insemination or were too young for the earlier calving.

“Unfortunately, when you have a breed with limited numbers in the country you have to sometimes persevere with a cow who is slow in conceiving,” Ms Warner said.

“Whereas, with a lot of the larger breeds you could move an animal on and then replace her from another breeder.

“This is not possible with breeds where you have limited numbers.”

As Ms Warner shows her cattle, she said it was also nice to have some smaller calves for the show season, which was mostly autumn onwards in WA.

After the loss of her husband about a decade ago, she set about structuring the property to enable it to be run by one person and manages to do 90pc of the onfarm requirements herself.

All animals at Paragon are halter broken once weaned.

Ms Warner found most smaller properties didn’t have infrastructure to restrain an animal if it injures itself.

“If halter broken, the animal can be at least caught in a small area and tied should it require medical attention,” she said.

“It takes only a short time for the animal to adjust and learn the halter is not a threat.”

Ms Warner has found one of the misconceptions about miniature Herefords is that “they will grow to the size of a dog”.

As a result of this, she won’t sell any of her animals to people unless they visit her property to see the size of the parents.

Miniature cows usually weigh about 400-500 kilograms and bulls 550-650kg – they are about two thirds the height of Paragon’s full-size animals.

As cattle are herd animals, Ms Warner prefers to sell in pairs or more, as opposed to singularly.

Unless buyers are looking to start a breeding herd, a pair of steers are recommended for the smaller properties.

“They have the advantage of not coming into season every 21 days if female or – if a bull – wanting to mate with any female in the district when she is in season.

“The other advantage of steers is if a purchaser needs to move on or simply outgrow the property, they can be either utilised for the freezer or simply sold onto saleyards.

“Most years all steers are claimed soon after birth for delivery once weaned.”

As well as selling her animals, Ms Warner displays them at shows.

This is not to win ribbons, but to showcase the breed and educate people.

“That’s something I am passionate about – trying to do my little bit towards bridging the city and country gap,” she said.

“It is incredible to see the number of people, both children and adults, that come up to touch an animal and make the statement that it is the first time they have ever done so. 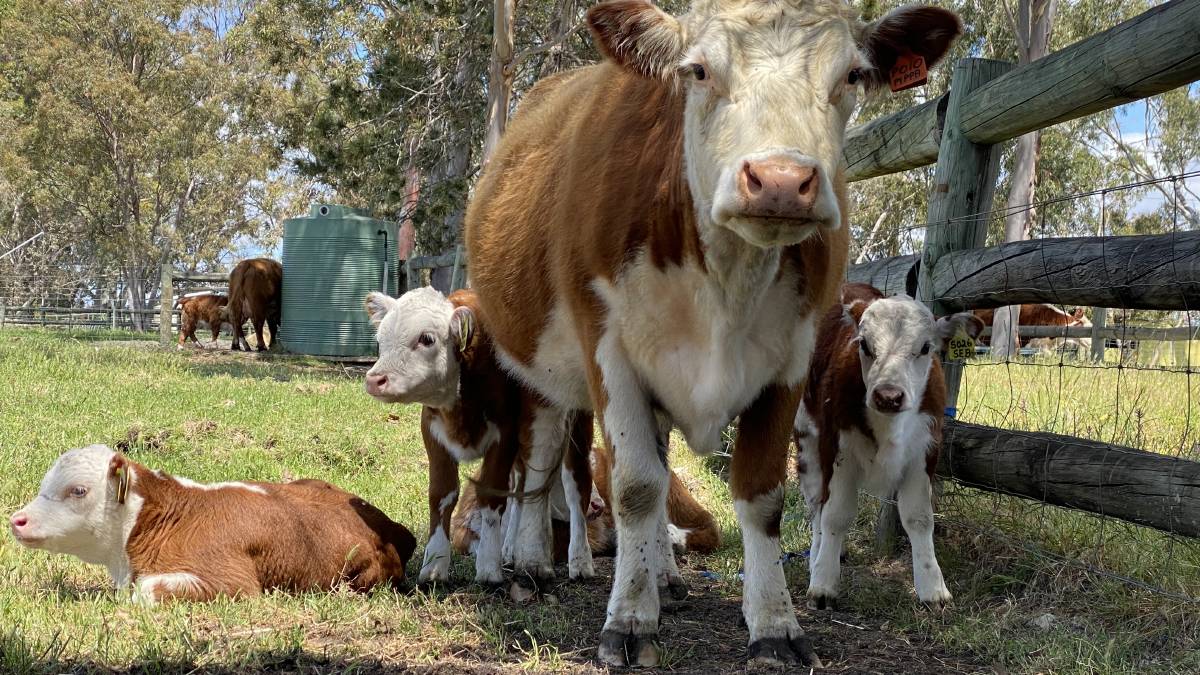 “That is at both shows and a couple of the small farm field days I participate in.”

Ms Warner feels it is also important to help pass on the “incredible amount of expertise” held by others in the cattle and farming industries to younger generations.

She does this through her involvement with the WA Youth Cattle Handlers Camp, which aims to educate young people from the ages of eight to 25 years in various aspects of the cattle industry, both beef and dairy, including handling, structure, breeding, leading, caring, feeding and many other elements of animal husbandry.

“There is so much diversity in the industry and there are so many different pathways young people can get involved in ,” Ms Warner said.

“Many farmers give up their animals for the participants to use, including both beef and dairy.”

So finally – what does Ms Warner love most about breeding miniature Herefords?

She said it was the satisfaction in seeing her animals improve and helping other breeders with their programs, as others have helped her along the way.

The marketers are at it again, breathlessly promoting “innovation” as a storm of startups gather, each hoping to cash out their venture capital before their business models crash and burn.