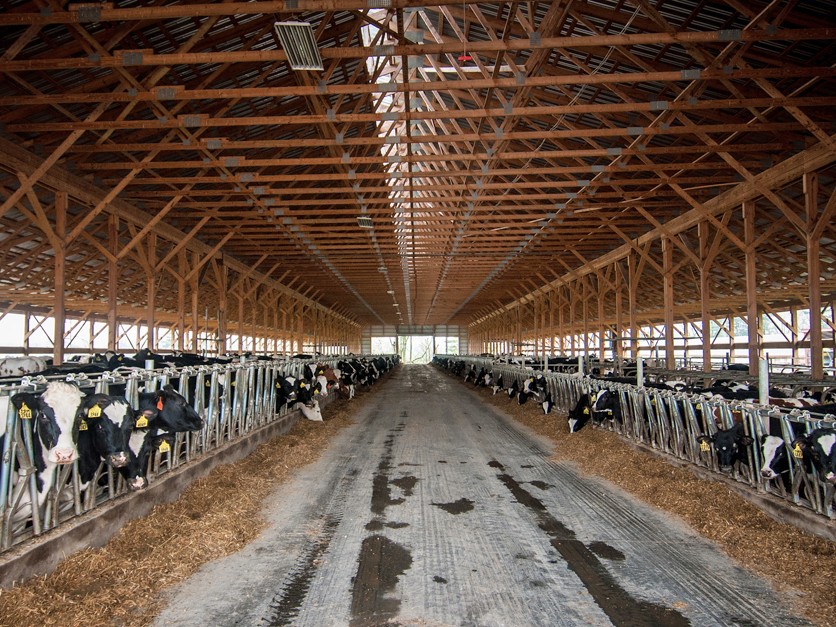 The increase in milk prices this year is providing some needed relief to U.S. dairy farmers after a least a couple of years of economic stress for most, but expanded production is dampening expectations for many producers in 2020.

USDA analysts project the national all-milk price, which has hung mostly in a band of $16 to $18 per hundredweight in recent years, will average more than $20 in the quarter ending Dec. 31 and average near $19 for all of 2020.

Just as crucial to producers, the national milk-feed ratio, which rates raw milk prices against feed and forage costs, has climbed to a friendly 2.4, up from around 2.0 and 2.1 through 2018 and much of 2019. Feed and forage costs are typically around 70% of total operating costs.

Meanwhile, last week USDA projected a 13% bump for farmers’ 2019 milk receipts, pushing them up $4.6 billion and to their highest in recent years.

The milk prices uptick poses a cheery enough picture for dairy farms that Peter Vitaliano, economist for the National Milk Producers Federation, declares: “Basically, all operations are going to get some relief this year, and … it’ll eliminate some of the pressure on the small producer.”

If considering just short term dairy market and operating costs, “this year by itself should not be stressful for any dairy farmer,” he said, “but the question is how weak of a financial position are you entering next year, based on the problems of that past five years?”

Looming over dairy’s economic situation in 2020 is the persistent expansion in milk production. USDA projects the national herd will remain around 9.33 million milking cows, but continued increases in milk output per cow — 1.7% for 2020 over 2019 — will boost total production by a like percentage, to more than 222 billion pounds next year.

That expansion has come despite a reduction in U.S. milk cow numbers, owing to weak milk prices, severe weather disruptions, and dairies selling out. The national herd shrank month-to-month in 2018 and through last summer but began swelling slowly again this fall.

In early 2018, the national herd was about 100,000 cows smaller than a year earlier, Vitaliano said. But that gap shrank to 40,000 this fall, “and at the rate we’re going now, the herd may start growing again on a year-over-year basis sometime early next year,” accelerating production of milk, he said.

While export demand worldwide has been strong, U.S. production of milk solids per cow “has been going up so fast» that there are increasing odds production could exceed demand, Vitaliano said.

Larger producers, who tend to have lower costs, are getting a break because of the higher milk prices and continued moderate feed prices, and “they’re the ones who will be expanding,» Vitaliano said.

According to a 2016 USDA Economic Research Service study, there is a large disparity in operating costs between large and small farms. Operating costs ranged from around $14.50 to $16.50 per hundredweight on average for farms with fewer than 200 cows, compared to about $10.50 to $11.50 for farms with more than 1,000 cows, according to their data from 2010.

Analysts say this year’s higher milk prices may hold limited promise, if any, for the long-term strength of many dairy farms.

“Prices have been coming up,” in his state, he says, and the federal order “has been a net positive for California dairy families.” That’s true, even though California’s October all-milk price, at $18.90, still trailed the comparable U.S. price by a dollar, he said.

Yet the milk price uptick doesn’t portend a growing California dairy sector, he said. California milk production has slipped moderately in recent years while the number of dairy farms has plunged by 30% in the past decade: 570 of them closed or merged with others from 2008 through 2018.

Vandenheuvel said advantages of scale and other factors have encouraged the mergers into the huge California operations. His own co-op members average about 1,700 cows each. But many factors are eroding California dairy operations, and while some of the dairies have expanded, “we’re not seeing new dairies replacing old dairies,» he said.

Some dairies are disappearing with the rapid expansion of California fruit orchards, which can earn a higher return per acre. But a bigger factor for the industry is increased regulatory costs in recent years, he says, including new groundwater use permitting, plus increases in both minimum wages for farmworkers, and new overtime pay requirements – all adding to the challenges to economic survival of dairy farms there.

So Vandenheuvel expects the number of California dairy farms will keep falling, even though the currently strengthening market is welcome.

Nationwide, the 2018 farm bill’s strengthened dairy support program, Dairy Margin Coverage, will pay out $309 million to farmers this year, owing to lower milk prices through most of 2019. DMC payments are calculated on a month-to-month basis. But USDA doesn’t expect DMC to provide any payments in 2020, and only about 11% of eligible production has been enrolled so far, ahead of a Dec. 13 signup deadline. That compares with 82% of milk enrolled this year. (Payments are based on the monthly estimate of the margin between raw milk prices and dairy farm feed costs.)

Looking ahead, some farmers may be hurt by limited supplies of good quality corn silage, hay, and haylage, the mainstays of many American dairy herd nutrition, and some pretty iffy supplies through the winter.

Wisconsin and other northern states received relentless rain in the spring, then through the fall as well, said University of Wisconsin economist Mark Stephenson. Rain and swamped conditions prevented corn plantings, hay and haylage harvests in the spring and summer, slowed corn crop progress, and then hampered corn harvests, he said.

He surveyed county extension staff in Wisconsin this fall to find hay supplies through winter will be short in places, “the quality (most often) below average … almost everybody was down by a least one cutting … and with corn silage … most folks were going to have pretty tight supply and quality … worse than average.”

USDA livestock feed specialist Thomas Capehart said pasture conditions are “not a good picture” in many parts of the eastern, southern and Corn Belt states for farmers who graze dairy cows.

He’s concerned about silage and haylage supplies, too, though USDA doesn’t have specific estimates. He said silage is usually estimated nationally by the difference between the number of corn acres that are planted and the number that are harvested for grain. “Most of that differential is generally silage, but this year … there’s so much corn still out there, and how much will be able to be harvested as silage, we don’t know.”