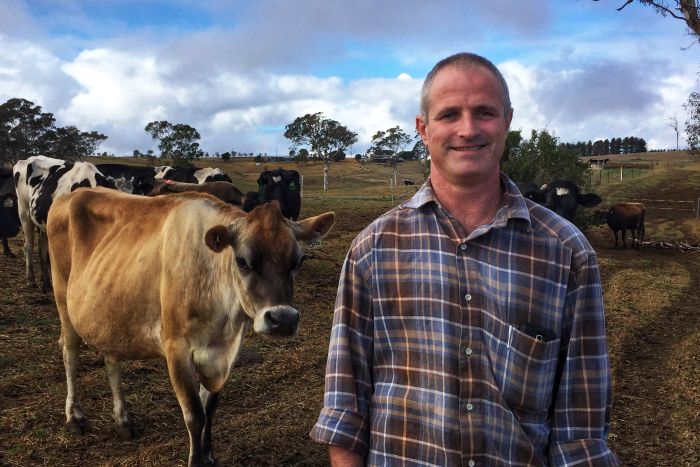 For the first time, dairy farmers in the Bega Valley could have the opportunity to supply the fresh milk market as Lactalis and Saputo look to secure new suppliers.

Key points:
Bega Valley’s 58 dairy farmers supply Bega Cheese, but are being targeted by milk processors
Declining milk production in Australia is driving fierce competition between dairy processors
Across NSW and Victoria, farmers are changing processors to receive a better farm-gate price for their milk

The aggressive move from processors to target Bega Cheese suppliers in the Bega Valley is another example of how fierce the competition is between dairy processors.

Across NSW and Victoria there has been an unprecedented churn of farmers opting to change processors in order to receive a better price at the farm gate.

However the remaining 58 or so dairy farmers in the Bega Valley have always supplied Bega Cheese.

Phil Ryan, a dairy farmer based at Toothdale, said while the discussions were in the preliminarily stages, he hoped the additional competition led to a better milk price for farmers.

«Well, it’s obviously some competition for milk supply, it potentially will lead to some better pricing for local farmers,» he said.

«It’s an indication that the supply of milk across the country and in New South Wales in particular is short.»

Saputo declined an interview but confirmed in a statement that a meeting had been held with farmers in the Bega Valley.

«At the request of local dairy farmers in Bega, we recently met to discuss our pricing structure, which aims to promote simplicity, transparency and fairness for all suppliers,» said a spokeswoman.

Each dairy farm is different, and the contract terms vary between processors, making it difficult to directly compare the three offers, but Mr Ryan said the fresh milk processors were offering a higher price.

«All the discussions are [in the] pretty early stages, it’s still very preliminary.

«Bega Valley suppliers are very loyal to Bega Cheese and would like to stay Bega suppliers — I think it’s fair to say.

«But we also can’t do that at the expense of our businesses.

«I would suggest that all of us are looking very carefully at what’s the best thing for our own farms and our own businesses.»

The biggest factor driving competition is the size of the national milk pool. Australia’s dairy production declined by 7–9 per cent in the past year.

Dairy Australia is forecasting a further 3–5 per cent decline in FY20 down to 8.1–8.3 billion litres as farmers face challenging seasonal conditions on top of elevated hay and grain prices and water input costs.

Ian Zandstra, Nowra-based dairy farmer and former chair of the Dairy Farmers Milk Co-op, said the current competition was due to a lack of supply and a recognition that farmers deserved a higher price for their milk.

«I think supply and demand has finally come into play. If you look at the Coles move [to deal directly with farmers], some of it has to do with product security in this very competitive white milk market,» he said.

«I think there’s also an understanding of the pressure on farmers — it’s very public, the economic stress upon farmers.

«There’s a genuine understanding that farmers are needing more money to remain viable.»

Too much ‘stainless steel’ in the system
The increased competition is not only due an ever-shrinking milk pool but also an excess in manufacturing capacity.

In a recent visit to Australia, Lino Saputo Jnr, head of Canadian dairy giant Saputo, lamented there was an oversupply of «stainless steel» or processing capacity in Australia and called for older dairy facilities to be mothballed.

While an increase in the price at the farm gate is good news for farmers, some analysts are concerned that competition for milk could lead to a price for milk in Australia that is divorced from the global commodity market.

«I wouldn’t say we are there yet, I mean, we know that the dairy companies reported lower profitability, but they are still making money,» he said.

«They’re still investing and trying to value add to their product mix.

«What you don’t want to see is profitability challenged for a long period of time, post-farm gate because that’s when you do run into counterparty risk for dairy farmers.

«That’s a clear risk if we see farm-gate prices get completely out of whack with a market-based pricing reality, but I just don’t think we are there yet.»

Bega Cheese and Lactalis have been contacted for comment.