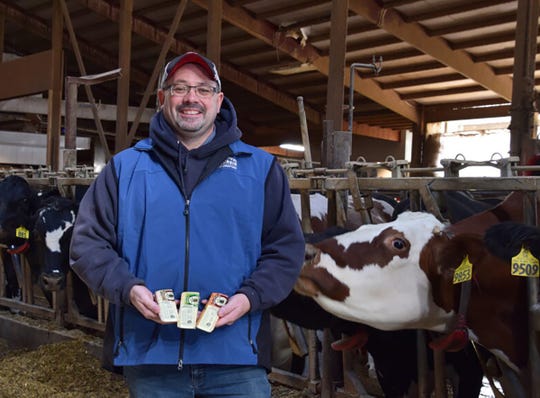 A bright, energetic, positive light in the dairy industry will shine no longer with the death of Dean Strauss. Strauss, 48, died on Sept. 29, 2019.

In May, Strauss was one of three farmers in the nation honored for Outstanding Dairy Farm Sustainability. In July he experienced sudden cardiac arrest while driving home from a dairy meeting in St. Paul. Several months later, he died peacefully at the Sharon Richardson Community Hospice Center surrounded by his family, according to his obituary.

«We have all experienced Dean’s energy and excitement while telling us about a farm tour, been amazed at his dedication serving on numerous boards and committees and remained inspired by his passion for dairy promotion and Wisconsin cheese,» the obituary stated.

Strauss served on several boards including the Farm Wisconsin Discovery Center board, being one of the initial funders in the center, the Executive board of Dairy Farmers of Wisconsin and the Dairy Policy Committee for Wisconsin Farm Bureau, according to the obituary.

Previously, he served on the boards of the Wisconsin Beef Council, the Department of Agriculture, Trade and Consumer Protection (DATCP), the Professional Dairy Producers of Wisconsin (PDPW) and Dairy Management Inc.

“Dean had a strong passion for all things agriculture. He was excited about the future in agriculture, always believing that tomorrow would bring even more innovation and creativity,» said DATCP Secretary-designee Brad Pfaff. «He died far too early, and his passing is a loss to the entire agriculture and dairy community. My thoughts are with his wife Kris, his parents Ed and Sandy, and the entire Strauss family at this difficult time.”

Shelly Mayer came to know Strauss as a young farmer on the PDPW board, full of energy and ideas, always asking «what if» and «why not,» searching for solutions, not complaining about problems, valuing family and friends.

Strauss served six years as president of the PDPW board. «His fellow board members thought the world of him and believed in him,» Mayer said. «It takes but a second to see how smart, how bright Dean was, but more than anything his enthusiasm for just everything is amazing.»

Strauss saw many possibilities for helping the dairy industry, as was evident with the many boards he served on including the Milk Marketing board, one area he focused on after serving on the PDPW board.

In brainstorming conversations Mayer said Strauss «would always go, what if? It was always, ‘but what if?'» When many people would ask why, Strauss would challenge with «why not?»

«I will miss that the most,» said Mayer. «For someone so young, he was born with that spark.»

Strauss was outgoing. He loved people. He loved his family. In an industry where professionals can feel alone, with challenges coming from all directions, Strauss was always willing to talk through problems and help others.

This was evident in 2012 when Strauss quietly helped Mayer’s family in the midst of a drought on their farm by providing haylage for their cattle. With rented hay burned off from the drought and corn that «wasn’t going to amount to anything,» Mayer said they were «in a tough spot.» Strauss did feed inventory on their farm, talked with his family and decided they would sell haylage to Mayer. Situated an hour and a half north of Mayer, Strauss’ farm hadn’t been hit by the drought, but that added the challenge of trucking the feed to Mayer’s farm. Despite the distance and the cost, Strauss told Mayer, «We’ll figure it out.»

«They trucked down a year’s worth of haylage and we bagged it and they sold it to us for the price of the year before,» Mayer said.

When delivering the feed and watching Mayer’s two sons goofing off behind the barn, Strauss reminded Mayer that «she had it all,» despite the challenges they were facing.

«Family was very important to him,» said Mayer. «He just respected people.»

In Strauss’ passing, «this dairy community, we lost a young, well-grown leader and the dairy industry has an immense amount of manageability that we probably didn’t have 30 years ago.»

Strauss had the making of a high-level leader and the desire to lead, not just sit and complain but invest his own time into issues, learn about it and be part of the solution.

In 2005, before animal rights were in the spotlight, Strauss helped PDPW start an animal welfare initiative that eventually lead to the National Dairy Animal Well-Being Initiative. While many in the industry didn’t want to put the time and energy into the initiative at the time, Strauss was passionate about the dairy industry defining animal welfare instead of allowing extremist groups to define it for them.

Strauss gave up time at a young age while developing his business, to be a leader in the industry, «and now we’ve lost that,» Mayer said. «We’ve lost this bright, what if, why not — we’ve lost this person that had the talent, had the heart, and had the ability to really inspire and move things in a positive direction.»

Julie Maurer knew Strauss as a neighboring farmer and fellow board member serving on the Farm Wisconsin Discovery Center board and as a representative of Dairy Farmers of Wisconsin.

«He was probably one of the most committed people to our industry,» Maurer said. «He gave of his time. Took time from his business and took time from his family to really make an impact and make a difference for Wisconsin agriculture.»

Jeff Strassburg knew Strauss for about 10 years, being elected to the Dairy Farmers of Wisconsin board around the same time.

«He’s been a true leader in every aspect of his life,» Strassburg said. «He loved his family, his farm. He was really a rock for us on the Dairy Farmers of Wisconsin board.»

«He was a great all around guy,» Strassburg added. «He had a great perspective on dairy in general and moving the industry forward.»

Strauss realized farmers have been facing tough times but he was always looking to better himself and his farm, better the industry by adapting technology, Strassburg said.

«He was always looking for the next niche to keep his farm viable,» said Strassburg.

In Strauss’ last blog «No one does it alone,» Strauss wrote that farming takes a team, there are no solo acts. He said to remember to say thanks to the people who got you where you were going, showing your gratitude every day. The dairy industry lost one influential team player and leader but will always be thankful for the role Strauss played in their lives.

Along with the Outstanding Dairy Farm Sustainability award, Strauss’ leadership and advocacy won other state and national awards including the Dairy Business Association Dairy Advocate of the Year.

Dean was preceded in death by his paternal grandparents, Elton and Myra Strauss and his maternal grandfather, Reuben Hoppe.