There were two key reasons for the divergence between volume and value. 1) A tighter global market raised unit values across the dairy complex. For example, the average price of nonfat dry milk/skim milk powder (NFDM/SMP) exports increased by $739 per metric ton (MT) from the previous January. Dry whey rose by $458/MT, and cheese increased by $68/MT. 2) The United States’ export portfolio increased in higher-per-unit-value products like cheese (volume up 17% year-over-year, +4,202 MT) and butterfat (+53%, +1,707 MT).

However, U.S. exports in its two biggest categories, NFDM/SMP and whey, lagged prior year volumes.

But the major volume decline came from whey, which fell 16% (-6,742 MT) and which we’ll explore more in-depth in the section below. 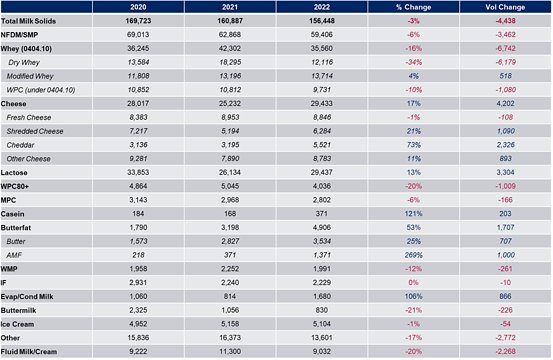 We do want to reiterate before going into our major takeaways that it is important not to overstate one month of data. Overall, as we mentioned in our final report of 2021, we anticipate that export volume will likely be choppy in the first half of 2022 given supply chain difficulties, slower supply growth and tough year-over-year comparisons. And that is exactly what we saw in January.

With that in mind, here are our key takeaways from January’s data:

As mentioned above, the major driver behind the decline in dairy export volume is the decline in whey demand, particularly from China. In January, U.S. whey exports to China under HS Code 0404.10, which includes predominantly sweet whey and permeate, dropped by 41% (-9,163 MT). If that sounds familiar, it’s because December’s whey exports to China fell by 52% (-13,034 MT) and November’s fell by 21% (-4,093 MT). So, this decline is more than a one-month blip.

As for the reasons for the decline, we can point to two main factors: China’s falling demand and tight sweet whey supplies.

On the first point, most U.S. low-protein whey products shipped to China end up in the animal feed sector, since the market for whey permeates for food use—a key success in the U.S.-China Phase I agreement—remains a relatively new, albeit growing, market.

In that feed sector, the finances for China’s pig farmers have struggled of late. Pork prices have fallen precipitously from their African Swine Fever (ASF) highs as pork supply rebounded and anecdotes suggest that China’s consumers have switched to other animal proteins, namely chicken. Those lower prices have been compounded by elevated feed costs. The combination of lower prices and higher costs have eaten into China’s pork industry’s margins and thus dampened the incentives to expand production (and thus whey usage).

Beyond a rebalancing market in China, supply of sweet whey—which accounted for the majority of the decline in January—has been limited and expensive. Dry whey prices are at record highs, and U.S. dry whey production fell by 12% in the second half of 2021, caused by milk production slowing and demand for protein in the health and wellness sector pushing more whey towards WPC80 and WPI.

Looking ahead, both factors (China and supply) are likely to act as a persistent headwind to U.S. dairy export volume through the first quarter even as value is likely to stay strong.

Those slowdowns might stem in part from foodservice uncertainty related to the omicron wave of the pandemic that began hitting importing nations in late November and is still making its way around the world.

More clarity on 2022 cheese demand should come in the months ahead, but the U.S. remains well-positioned from a production standpoint and in a favorable price position to meet overseas needs, with a geographic advantage to serve growing Latin American markets. Overall, sharply growing cheese exports should provide a major boost to U.S. export value.