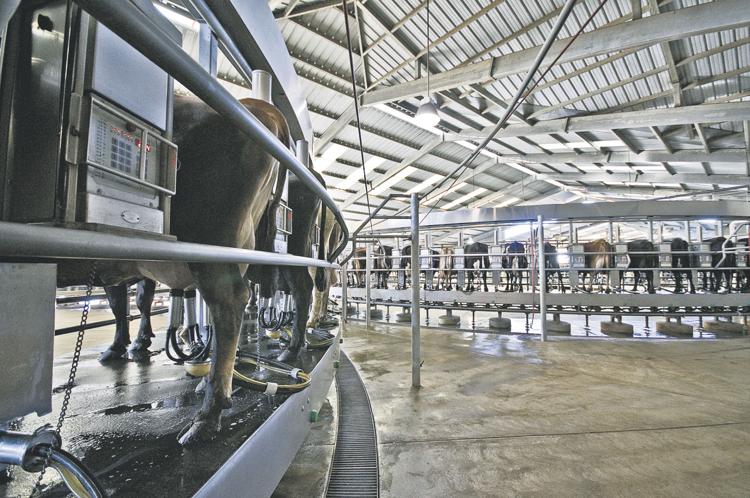 Cows are milked at a California dairy. Milk production is up, casting a shadow over prices.

Family-run dairy farms are fuming after regulations they were told would protect them from unscrupulous milk processors appear set to do the opposite.

Key points:
A new draft code states processes could change contract conditions after they were signed if there are «circumstances beyond the reasonable control» of the processor
The president of Dairy Connect said «there wouldn’t be much there to stand up for farmers having that clause written in that way»
The ACCC deputy commissioner said the new wording in the code needs «some serious thinking about»

The government’s own competition watchdog, the ACCC, says it has concerns the proposed regulations are hazy and could entrench the market power of big multinational companies.

«We believe that farmers may be in a worse situation than what they were in regard to the Murray Goulburn debacle,» dairy farmer Graham Forbes told AM.

In 2016, milk processor Murray Goulburn retrospectively slashed milk prices for its suppliers after running into financial headwinds on global markets.

Under pressure to save an industry in trouble, the government promised new regulations to force processors to stick to prices and agreements.

A draft code of conduct released in January «prohibited» such actions unless there were «exceptional circumstances.»

But in a new draft released last month by Agriculture Minister Bridget McKenzie, processors could change contract conditions after they were signed if there are «circumstances beyond the reasonable control» of the processor.

«There wouldn’t be much there to stand up for farmers having that clause written in that way,» Mr Forbes, who runs an 800-head dairy farm in Gloucester on the NSW Mid North Coast, told AM.

He is also the president of Dairy Connect, which represents New South Wales and Queensland family-run dairy farms.

ACCC deputy commissioner Mick Keogh told AM the new wording in the code needs «some serious thinking about.»

«The concept is somewhat unclear and as far as we understand it, untested at law,» he said.

Asked if he thought the new wording could see a repeat of the turmoil of the 2016 Murray Goulburn affair, he replied: «It’s unclear and I think that is a concern where a code is unclear in relation to those consequences.»

Senator McKenzie dismissed concerns about the new wording of the code and called for farmers to share their thoughts on the draft.

«We’re wanting to get on and deliver a mandatory code that delivers for our dairy farmers,» she said.

«I’ve spoken with Mick [Keogh] and I agree with him, there are some issues that need clarity so we’re out talking with dairy farmers each and every week over the next four weeks.»

The ACCC assisted drafting the original code after the government asked it to help level the playing field in the dairy industry.

«She’s useless, she shouldn’t be there,» senator Hanson told AM.

«I think she should be sacked. They are actually protecting the processors, not the farmers.»