Dairy | Dairy markets are healthier than years past 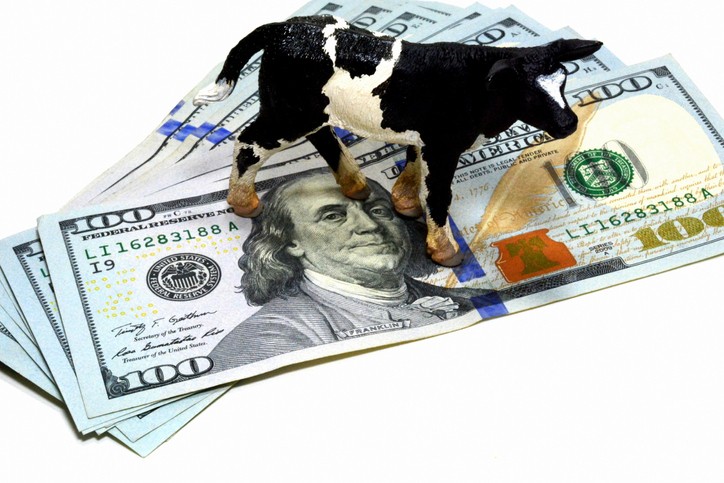 Trade tensions between the US and China have finally started to ease, but US consumers might see the tariffs reflected in retail prices soon. Pic: Getty/Lumineux_Images
Cow on top of $100 dollar bills against a white background.

Tighter global milk supplies will provide a firm floor under dairy product prices over the next 12 months. Class III and Class IV contracts are unlikely to spend much — if any — time below $16 per cwt.

However, the ceiling may not be lofty. The global economy appears to be softening, and a strong currency and erratic trade policy have put U.S. dairy exports at a disadvantage. As long as these factors remain in play, demand will fade noticeably as prices rise, keeping rallies in check.

The combination of lower output and robust domestic consumption has whittled down the U.S. cheese stockpile, propelling CME spot Cheddar to multi-year highs. If growth in global milk output remains modest and demand persists, these markets are poised to climb.

Butter and whey values are less likely to soar. Most of the bad news has been factored into whey prices, and the inexpensive protein has started to attract bargain shoppers.

But exports to the U.S.’s top market will likely remain depressed. African Swine Fever (ASF) has decimated China’s swine industry; perhaps half of the world’s largest pig herd has been preventively slaughtered or succumbed to the disease. Chinese demand for whey for piglet rations has fallen accordingly, and the U.S. share of this shrinking market has waned due to punitive tariffs. There is room for a rebound in whey pricing, but the fundamentals don’t forecast a sizable rally.

Poor margins and adverse weather have taken a toll on global milk output. Production among the major dairy exporters lagged behind the prior year from November 2018 through June 2019.

Global milk collections topped year-ago levels in July, but a flood of new milk seems unlikely. British, Irish, and Polish dairy producers have added cows and modernized their operations, lifting milk output. But that growth will be at least partially offset by smaller herds in Germany, France, and the Netherlands.

In Oceania, much depends on the weather. New Zealand’s dairy producers are highly leveraged and hemmed in by environmental restrictions. They will not be able to add many cows, so production per cow will drive milk collections. In Australia, the dairy industry has been devastated by years of drought, and output will remain depressed. On balance, growth in global milk production is likely to be tepid at best.

In the U.S., milk production likely will remain near prior-year levels. Slaughter volumes remain historically high, signaling that contraction continues. Years of pain on the farm have incentivized dairy producers to prune the dairy herd from every angle. They have invested less in their calves and heifers, crossbred with beef genetics, and placed heifers in beef feedlots. These breeding and culling decisions have reduced heifer inventories. If dairy producers decide to add a lot of cows in a hurry, their ambitions will eventually be curtailed by the scarcity — and expense — of replacement stock.

Strained credit and the slow permitting and building process will further impede the industry’s ability to expand the milk cow herd with vigor. That means that milk yields will continue to drive growth in U.S. milk output. However, the Corn Belt is just drying out after its wettest 12 months on record. The basis is sky-high and forage quality is variable in several key dairy regions, which will weigh on milk production per cow for some time.

Will there be more milk?

Higher milk prices will, of course, encourage dairy producers to top off the bulk tank by keeping their barns full and tweaking rations to boost milk yields. But a gung-ho, rally-killing expansion is improbable. After years of financial pain, dairy producers will be extremely sensitive to lower milk prices and somewhat numb to higher values. If demand for dairy disappoints, prices will fade, and the milk cow herd will shrink further.

Eventually this contraction will stabilize the market, albeit at prices that are somewhat lower than current values. In this way, the industry’s financial vulnerabilities act as a fail-safe, making it extremely unlikely that prices can persist at the unacceptably low levels of early 2018.

By the same token, many dairy producers will be understandably hesitant to take on the debt required to build, stock, and staff a shiny new parlor, even if prices move higher. While dairy producers will welcome larger milk checks, they are more likely to pocket the proceeds than to invest them in a lot of new cattle. If demand impresses, languid U.S. milk output could allow dairy prices to improve further in the year to come.

On the whole, the dairy markets are much healthier than they were in years past. Supply and demand have come into balance at prices that will allow dairy producers to pay the bills and slowly chip away at their debt. The smaller milk cow herd, limited heifer supply, and lower dairy product inventories suggest that milk prices will remain well supported. But cheap corn and a less vibrant economy argue against a rip-roaring rally.