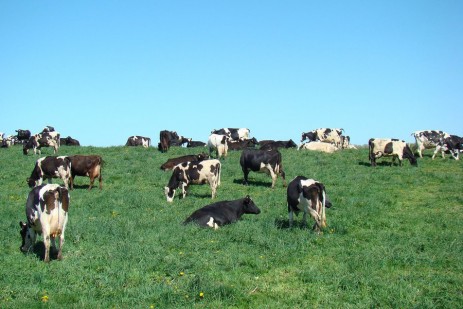 Whether a dairy operates a grass-based, organic, or high technology system, margin has the same significance. Calculating breakeven cost of production is critical to determine financial health.

Calculating an operation’s breakeven cost of production is the critical first step to determine the financial health of a dairy business. Over the years the dairy industry has divided itself into three main production systems: grass-based, organic, and high technology. These systems can be low or high input regarding the cropping and feeding program and the expenses related to overhead and direct costs. Regardless of the type of production system, the margin still has the same significance. The scale may be different, but the breakeven cost of production can show a similar deficit or surplus cash flow.

The Extension dairy business management team has been summarizing results from 2018. It is no surprise last year is being compared to 2009 in its degree of devastation. All sectors of the industry have felt the effect of low margins. For organic producers the milk price hovered around $29 to $32/cwt with a breakeven range between $34 and $35/cwt. For the high technology operations, the average milk price ranged between $16 and $17/cwt. with break evens between $18 and $19/cwt. The challenge with grass-based systems is the low milk pounds. In this production system where no corn grain or additional energy sources are provided, it is not unusual to observe average milk production at 20 to 25 pounds of milk/cow/day. This typically does not provide the needed income to cover expenses even though costs are considered extremely low by conventional standards. The solution for success in the three production systems is knowing the breakeven cost of production.

It is no longer a good idea to wait for the market to provide the windfall of a high milk price. For the conventional producer, it would take at least a couple of years at a milk price of $22/cwt to combat the debt currently accumulating. Organic producers require a milk price in the high thirties or even forty dollars per hundred weight to make a dent on debt. It does not appear that scenario is in the industry’s near future. The main culprits affecting an operation’s margin are milk income, feed costs (both home-raised and purchased), labor, and debt service. Finding the bottlenecks to maintain a sustainable margin requires knowing the financial and production numbers and how to adjust management practices to improve the margin.

Grazing and pasture management are important in all three production systems just at different intensities. Energy is going to be the nutrient of greatest concern for pastured cows and heifers. As a general rule-of-thumb, a cool-season perennial pasture (most common in Pennsylvania) should be grazed no lower than three inches before removing animals and transferring them to a new pasture with at least six inches of forage growth. Pasture quantity and quality, like harvested forages, impacts both production and financials. Fertilization beyond what the animals contribute may be warranted when extending the grazing season into the fall and winter.

Stockpiling is a deferred grazing management strategy where animals are removed from pastures so forages can accumulate, usually beginning late July into early-August. Some cool-season grasses that have shown to be successfully stockpiled include: tall fescue, downy bromegrass, timothy, and birdsfoot trefoil. Inter-seeded annual forage crops, such as triticale and forage brassicas, into existing pastures can also be stockpiled. They will provide more forage mass and increase overall forage quality.

When grazing, either to provide the main forage source for lactating cattle or supplemental forage for cows and heifers, manage for BOTH quality and quantity. The benefit should be improved milk production that will equate to a greater milk income per cow. Properly managed pastures can reduce feed costs, so in theory these improvements should help maintain a stronger margin to cover other expenses. In today’s market, tweaking management practices to get the most bang for the buck is essential. Sustainable margins do not discriminate based on the production system.
Action plan for optimizing pasture management

Step 1: Utilize Penn State Extension’s Excel Cash Flow Spreadsheet to determine the farm’s breakeven cost of production.
Step 2: Working with the appropriate consultants, evaluate grazing strategies for the herd to ensure adequate regrowth on pastures and monitor quality during the spring, summer, and fall.
Step 3: Set contingency strategies for supplementing forage and concentrates as pasture quality and quantity diminish.
Step 4: Monitor income over feed cost monthly if pasture is utilized for the milk herd. Monitor heifer height and weight monthly when on pasture.

Monitoring must include an economic component to determine if a management strategy is working or not. For the lactating cows, income over feed costs is a good way to check that feed costs are in line for the level of milk production. Starting with July 2014’s milk price, income over feed costs was calculated using average intake and production for the last six years from the Penn State dairy herd. The ration contained 63% forage consisting of corn silage, haylage and hay. The concentrate portion included corn grain, candy meal, sugar, canola meal, roasted soybeans, Optigen® and a mineral vitamin mix. All market prices were used.

Also included are the feed costs for dry cows, springing heifers, pregnant heifers and growing heifers. The rations reflect what has been fed to these animal groups at the Penn State dairy herd. All market prices were used. 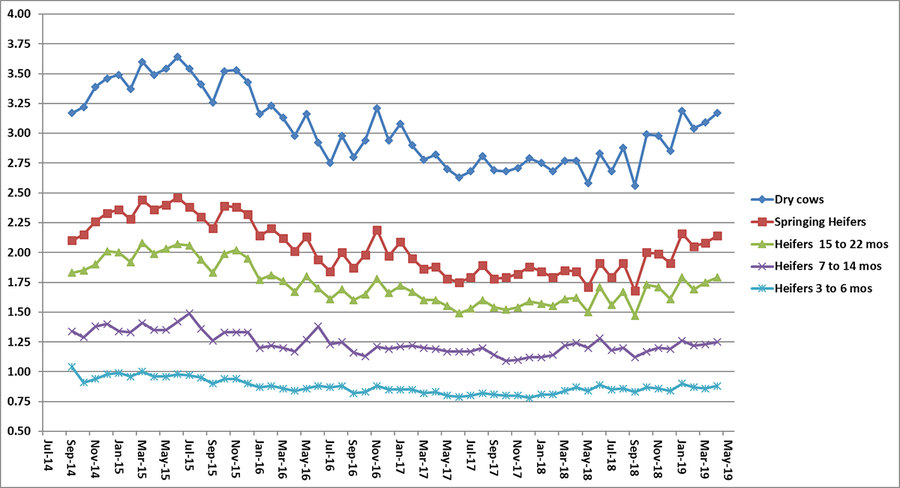