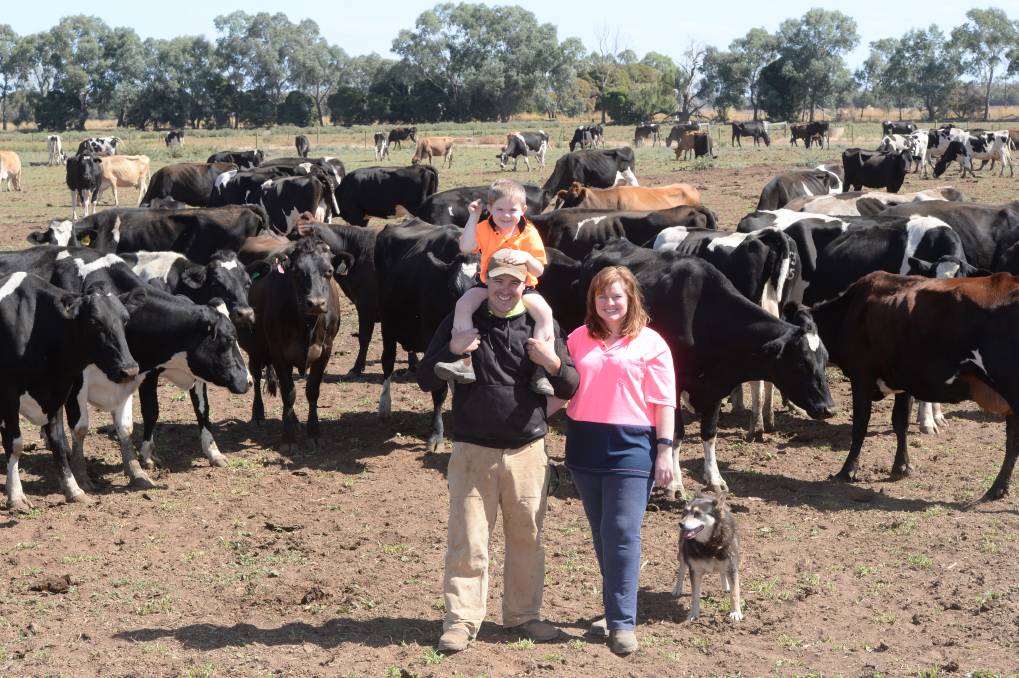 Aaron and Rikki-Lee Tyrrell with their son Emmett, 4, and their dog at Tyrrells Family Dairy, Invergordon Vic. Photo: Rachael Webb

Dairy farmers are hesitant to race and adopt disruptive technologies, believing it may not be the answer to their industry’s issues.

The Little Big Dairy Co’s Erika Chesworth said technology was already playing a part in the dairy industry, and it would continue.

«These (disruptive technologies and micro-processing facilities) are exciting opportunities for some, but this certainly will not be an option for all,» she said.

Rikki-Lee Tyrrell who runs the Tyrrells Family Dairy, alongside her husband Aaron, at Invergordon, Vic, said they were always looking for new ways to monitor and improve production as effectively as possible, but within reason of affordability and knowing how well it works.

«Being the guinea pig (of new artificial intelligence) and having it fail, especially in the current climate, makes you hang back a bit,» Ms Tyrrell said.

She said the future of robotics on farm was already happening and was something they would consider.

«Technology has helped farmers in the sense that when they can’t afford something, technology takes up the slack. It has allowed for farmers to manage their farm more efficiently … helping them to step up a notch by applying their skills and time more effectively within other areas,» Ms Tyrrell said.

«However it is hard to make changes, with the climate and current hardships in farming and agricultural from policies and governments frequently changing.»

With new disruptive technologies and artificial intelligence (AI) entering the industry, she said it could change employment opportunities.

«With new technologies, there would still be people behind the scenes making it work, so it would maybe more-so be changing the roles rather than removing them,» Ms Tyrrell said.

new NSW Farmers Dairy Committee chair Colin Thompson said traceability was something producers believed consumers had the right to know, but it was already happening.

«Traceability through AI would be an advantage for both processors and consumers, but it is pretty much already happening through barcodes, processors can track the product closely,» he said.