“Ultimately it would be great to see a Dairy Beef Value Index for calves, based on the right recording systems, to determine the value of a dairy beef calf for rearing and finishing,” he says.

The classifications are based on animal growth rates using the same pasture feed supply taking the animals from weaner calves through to finished. His modelling took the highest quality calf and assumed it was bought for $500 by the finisher. He then adjusted the purchase price of the lesser-quality animals to ensure the finisher received the same gross margin.

On that basis a category C heifer calf would have to be discounted so much that the finisher would need the dairy farmer to pay them $120. (Table two.) The increased use of cow collar technology should make an all-AI mating easier and more acceptable to dairy farmers.

Bob says an ideal option in the future would be for sexed dairy semen to be used across the highest BW cows to give dairy replacements with the highest Dairy Beef Value Index semen, that could also be sexed semen to produce males, used across remaining cows. The Dairy Beef Index for beef sires would not only include the value for beef finishing but also the value for calving ease and gestation length for the dairy farmer.

DNA testing of progeny would determine parentage giving dairy farmers confidence in identifying sires and getting around issues of calves’ markings, he says.

That confidence would also transfer to the beef finisher who would know the calves would perform despite their colour markings. Buyers need to move away from only looking for those perfectly marked calves and discounting or not buying others. That’s not objective enough and rearers end up missing out on animals that could give them rapid growth rates and dairy farmers are out of pocket and have wasted their efforts, he says.

“The fact is to get away from bobbies we’re going to have to find homes for 2.1 million calves.

“We’re going to need 550,000ha to stand them on if we take them through one winter – which is a system we’ve got to start considering.

“If we don’t and dairy farmers have to carry calves and rear them themselves we’re looking at dropping one million dairy cows to accommodate them.”

The technologies exist now to streamline and set up systems to enable what some may call a revolutionary shift.

While it’s the dairy sector’s risk, with the right thinking and actions it could also be an opportunity for both the dairy and beef sectors and New Zealand as a whole given there are also opportunities to reduce biogenic greenhouse gas (GHG) emissions. 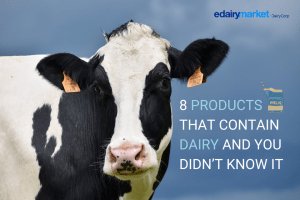 Did you know that some chewing gums contain dairy products?

Where will the money come from?

Where will the money come from?