As the head of the Meat Industry Association in New Zealand, representing the country’s second-largest commodity export, Karapeeva just wishes they had more of our meat on their menus.

“They were out and about eating in top-notch restaurants and spending up, so clearly there’s a lot of opportunity there, but it’s an area that we haven’t been able to crack,” she says. “It is very much in our scope and very much in our line of sight as a priority market.”

India is Asia’s third-largest economy after China and Japan, but only 19th in New Zealand’s list of most valuable meat export markets in Asia, taking just $1.6 million of the country’s meat, mostly sheep, in the year to the end of August compared with China’s $3.85 billion and Japan’s $531m.

According to the Ministry of Foreign Affairs and Trade, India’s average tariff on agricultural goods is 34.4%, making the market uneconomic for most New Zealand agribusinesses, and obstacles behind the border with additional regulations further hinder trade.

India is also way down the list of Asian export markets for New Zealand’s biggest export commodity, dairy, coming in a lowly 27th with $3.9m of exports over the year to August, lagging behind China at $7.1b and Japan at $573m.

While India is a significant consumer of dairy products, it’s also a significant producer in its own right and has not opened up its dairy market for any country via a free trade agreement, Crewther says.

“It’s the most significant market in the region that isn’t covered by FTAs,” she says.

Japan is another bugbear for dairy, operating a system that sees tariffs snap up to prohibitive levels once quota volumes are met, some of which are very constrained. A lottery system for allocating quota adds additional uncertainty for exporters.

Trade policy has been key to shaping markets for New Zealand agricultural exports, with trade to Asia accelerating faster than protected markets in Europe and North America. And Asia’s faster growth prospects mean it will continue to be an attractive destination for exporters.

“Given short and long-run prospects for economic growth are greater in Asia than in Europe and North America it is imperative that New Zealand exporters invest significantly in Asia for future growth,” Scrimgeour says.

“As New Zealand addresses the challenges associated with declining livestock numbers we have the opportunity to increase the value we get from each unit of product reaching Asia.”

“Trade agreements open up those doors and make our products a lot more competitive,” says the meat industry’s Karapeeva.

She says demand for natural protein in Asia has been “phenomenal” over the last couple of years, which has helped the industry at a time when shipping products further afield was difficult due to pandemic disruption.

The country’s dairy trade to Asia has grown five-fold over the last 50 years, helped by increased demand as developing markets in the region continue to grow, according to the dairy industry’s Crewther.

She notes dairy consumption in Southeast Asia has increased from an average of around 18kg per capita per year in 2010 to 26kg in 2020 and continues to expand.

“With economic growth and consumption growth, we are seeing a broadening of demand for dairy products,” she says, with demand for cheese up 10% per annum in some Asian markets.

Fonterra is trying to encourage consumers in China, its largest market, to use dairy products in their local cuisine. (Video first published January 28, 2022)

It’s a trend evident at the country’s largest dairy company, Fonterra, which gets about a third of its profits from China where it has a strong foodservice business supplying bakeries, restaurants and cafes with specialist dairy products. It’s hoping to replicate that success throughout Southeast Asia with the expansion of a wealthier middle class who can afford higher value products.

By contrast, Fonterra this year pulled the plug on its joint venture in India. An earlier attempt at the Indian market with Britannia International fell through in 2009.

But not all FTAs are created equal. While the China FTA has proved a boon for sectors like dairy and meat, propelling it ahead of other countries in the trade stakes, that hasn’t been the case for all agricultural exporters.

New Zealand’s onion industry, the country’s biggest fresh vegetable export, is blocked from exporting to China due to phytosanitary rules. It also faces prohibitive 135% tariffs in South Korea and is shut out of the Philippines due to import permit rules.

“Without access to those significant markets, it’s very hard for us to expand or increase our exports,” says James Kuperus, chief executive at Onions New Zealand. “We’re still working to try and gain access to those markets.”

New Zealand exports about 85% of its onion crop, and almost half of that, worth $56m in the year to August, was sent to Asia, according to Stats NZ data.

Kuperus says the proximity to Asia with some large, populous economies on our doorstep is a big advantage for exporters.

“When we export to the likes of Europe, we’ve got to send product on a ship for six to eight weeks and then we may not get paid for another couple of months after that, so it’s a lot closer and the payment terms are a lot faster as well,” he says.

Indonesia, Asia’s fourth-largest economy and the world’s fourth most populous country with more than 275 million people, is the biggest market in Asia for New Zealand onions, accounting for a quarter of total exports.

New Zealand has been exporting onions to Indonesia for more than 20 years and has carved out a position as a trusted and reliable supplier for the country where the staple is difficult to grow due to its hot and humid climate.

Gaining access to more Asian markets would be very significant for the industry, Kuperus says.

“We don’t need to capture much of the market – all we need is a small portion and it would make a significant difference for New Zealand onion growers,” he says.

Kuperus would also like to diversify away from traditional markets and explore fringe markets that haven’t been exported to in the past.

But he recognises New Zealand officials have a tough job.

When a cow belches, it releases methane, around 220 pounds of it every year, into the atmosphere. 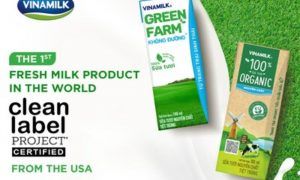