The benchmark gauge for world food prices went up in February, reaching an all-time high, led by vegetable oils and dairy products, the Food and Agriculture Organization of the United Nations (FAO) reported today.

The FAO Food Price Index averaged 140.7 points in February, up 3.9 percent from January, 24.1 percent above its level a year earlier, and 3.1 points higher than reached in February 2011. The Index tracks monthly changes in the international prices of commonly-traded food commodities.

The FAO Vegetable Oils Price Index led the increase, rising 8.5 percent from the previous month to reach a new record high, mostly driven by increased quotations for palm, soy and sunflower oils. The sharp increase in the vegetable price index was principally driven by sustained global import demand, which coincided with a few supply-side factors, including reduced export availabilities of palm oil from Indonesia, the world’s leading exporter, lower soybean production prospects in South America, and concerns about lower sunflower oil exports due to disruptions in the Black Sea region.

The FAO Dairy Price Index averaged 6.4 percent higher in February than January, underpinned by lower-than-expected milk supplies in Western Europe and Oceania, as well as persistent import demand, especially from North Asia and the Middle East.

The FAO Cereal Price Index increased 3.0 percent from the previous month, led by rising quotations for coarse grains, with international maize prices up 5.1 percent, due to a combination of continued concerns over crop conditions in South America, uncertainty about maize exports from Ukraine, and rising wheat export prices. World wheat prices increased by 2.1 percent, largely reflecting uncertainty about global supply flows from Black Sea ports. International rice prices increased by 1.1 percent, sustained by strong demand for fragrant rice from Near East Asian buyers and the appreciation of the currencies of some exporters against the U.S. dollar.

The FAO Meat Price Index rose 1.1 percent from January, with international bovine meat quotations reaching a new record high amid strong global import demand and tight supplies of slaughter-ready cattle in Brazil and high demand for herd rebuilding in Australia. While pig meat prices edged up, those of ovine and poultry meat declined, in part due, respectively, to high exportable supplies in Oceania and reduced imports by China following the end of the Spring Festival.

The FAO Sugar Price Index declined 1.9 percent amid favourable production prospects in major exporting countries such as India and Thailand, as well as improved growing conditions in Brazil.

“Concerns over crop conditions and adequate export availabilities explain only a part of the current global food price increases. A much bigger push for food price inflation comes from outside food production, particularly the energy, fertilizer and feed sectors,” said FAO economist Upali Galketi Aratchilage. “All these factors tend to squeeze profit margins of food producers, discouraging them from investing and expanding production.”

The FAO Food Price Index measures average prices over the month, so the February reading only partly incorporates market effects stemming from the conflict in Ukraine. 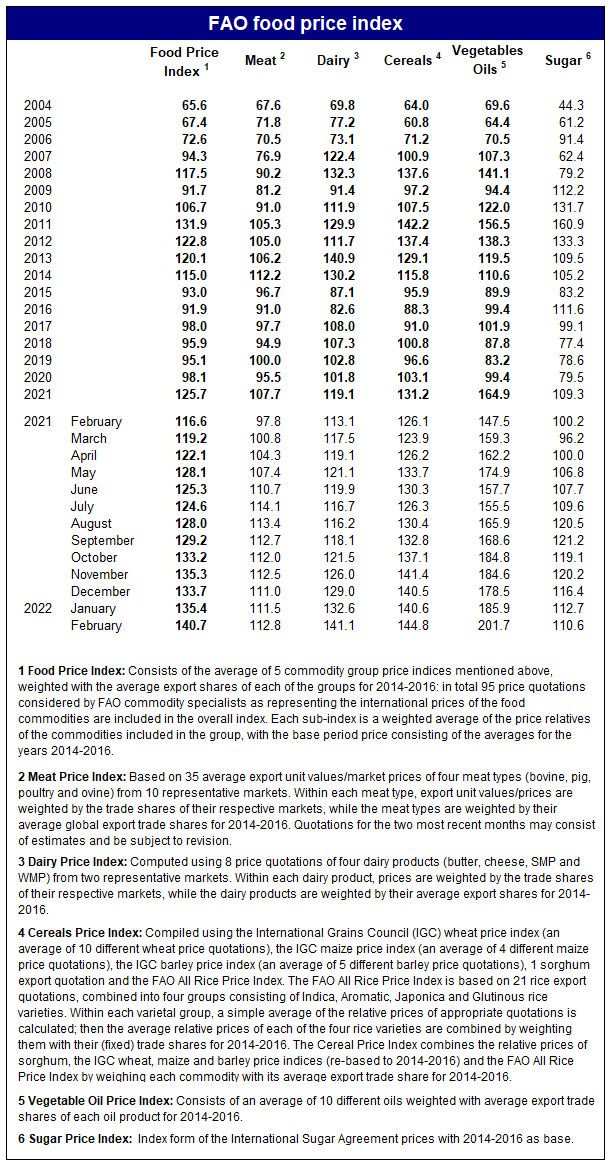