Ice cubes clinked in cafés and coffee houses across the UK this summer, as Brits chugged cold brews and chilled lattes to cool down in scorching temperatures.

Now, as autumn takes hold, those sales are set to dip – and that’s not just because of the cooler weather.

From Costa to independent caffs, coffee prices have been rising for months due to escalating input costs.

At a time when energy prices are expected to surge to £4k a year and food inflation is hitting new highs, it means shoppers are likely think twice before forking out on fancy frappés at their local coffee shop.

This could be good news for retail, where a cheaper hit of cool caffeine is available. And consumers are already taking note, if the latest sales data is anything to go by.

Value sales of iced coffee have risen 22.8% in retail over the past year [Kantar 52 w/e 12 May 2022]. That’s been enough to see coffee far outstrip chocolate as the most popular flavour in dairy drinks, accounting for 38.2% of the market. 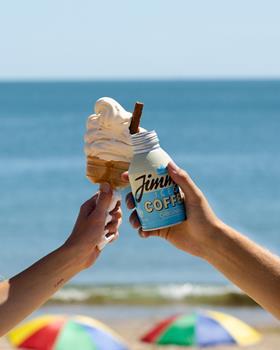 “The pace of category growth has been exceptional and it is undoubtedly one of the soft drinks category’s success stories,” he says.

Emmi marketing head Laura Graham suggests ready-to-drink coffees are reaping the rewards of offering indulgence and functionality in one go.

“With the fatigue so many people have been feeling after the events of the past couple of years, consumers want to carve out time for themselves, to recharge,” she says.

“RTD iced coffee ticks this box in a big way. It’s a bit of indulgence, but with a small jolt of caffeine to give an energy boost,” Graham adds.

Crucially, they also offer a substantial saving over coffee shop prices – an increasingly relevant factor as the threat of recession looms large.

Furthermore, in marked contrast to the average 6.6% rise in the price per litre across the dairy drinks category, the price of a litre of coffee drink has fallen 6.8%.

One reason is the flurry of new larger formats and multipacks for at-home consumption during the pandemic, as impulse sales of singles fell off a cliff.

The rollout of larger formats has continued into this year, with Arla’s launch of the first Starbucks multiserve formats: 750ml packs of the brand’s popular Caffè Latte and Caramel Macchiato flavours. 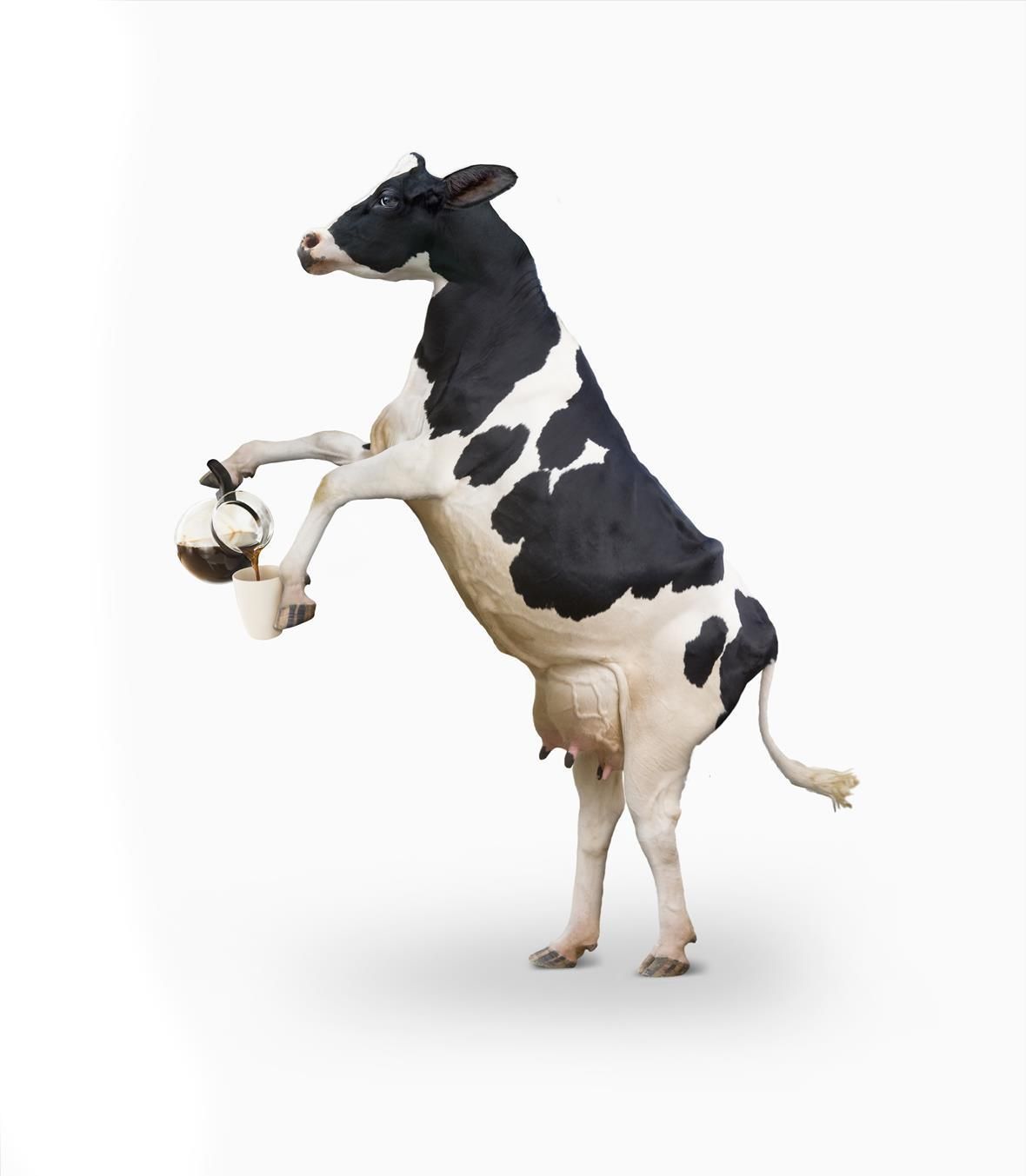 Suppliers say demand for multipacks and larger formats has been boosted by a shift in purchasing habits that has outlasted the pandemic.

“Hybrid working means people are looking for pick-me-ups to enjoy when they’re working at home. As a result, multipacks have continued to grow.”

It’s insight echoed by many in the industry, including Crediton Dairy. Having launched a one-litre format for its Arctic Coffee brand in the early months of the pandemic, it is continuing to see strong sales in this area.

While travel and convenience channels have seen “single-serve packs growing in popularity again… this hasn’t been at the detriment of multi-serve packs, which continue to play a valuable role,” says Crediton marketing & insight head Abigail Kelly.

Another pandemic trend that has endured is the more frequent use of local shops, particularly convenience stores.

To this end, Shaken Udder this year added a range of ambient milkshakes that don’t require chilled storage space, which is at a premium among smaller c-stores. Having launched Chocolush and Vanillalicious variants, the brand is looking at rolling out more flavours, including Strawberries & Clotted Cream.

That would be shrewd, given strawberry is the only other big-selling flavour in growth across dairy drinks – rising 9.5% in value on volumes up 9.7%.

Meanwhile, chocolate, vanilla and banana have sold 7.3 million fewer litres between them. But dismissing them as yesterday’s news is inadvisable.

For one thing, along with strawberry, they boast a significantly lower average price per pack than coffee – even after this year’s increases. Banana, for example, is up 13.1% to an average of £1.48 – but it’s still 55.3% lower than coffee’s £3.31.

What’s more, non-coffee dairy drinks still account for 60% of the category. And there is plenty of room for more innovation.

Cookies & Cream is the bestselling F’real flavour, and the business has just launched Banana and Birthday Cake. The latter is a UK-specific reimagining to the Cake Batter flavour sold by F’real in the US.

Other brands are relying on modern takes of classic flavours, such as chocolate. It may have lost its top spot to coffee, but it’s still winning over consumers, insists Kelly at Crediton. In fact, it’s “having a new lease of life, with white chocolate being the most popular flavour of our The Real Milkshake Company brand” she says.

Launched in Morrisons in March this year, The Real Milkshake Company was developed to appeal to a younger consumer, using a contemporary design and indulgent flavours.

“The majority of sales are bringing new consumers into the category,” Kelly adds.

Salted caramel is another favourite with Real Milkshake consumers. Many other suppliers have high hopes for the indulgent flavour, which has been a hit for some time in other categories, including desserts and confectionery.

But indulgence isn’t on everyone’s mind when shopping the dairy drinks aisle. A growing number of shoppers are seeking out a healthier option.

Suppliers say better-for-you products are starting to grow again, having taken a brief hit during lockdowns.

“Our research shows that, for nearly 80% of shoppers, supporting their own immunity is a huge priority when choosing food and drink.”

“The demand for fortified dairy drinks is a clear post-lockdown trend,” says Weetabix On The Go marketing manager Christian Sarginson.

“The pandemic has heightened awareness of the benefits of gut health products, she says. “Following the ease of lockdown, the penetration of kefir has continued to increase dramatically.”

Still, amid all the optimism there are notes of caution from suppliers, as they deal with a raft of rises in input costs.

As a result, many have been forced to increase the prices for retailers. That includes FrieslandCampina.

“Our cost price increase across the Yazoo portfolio is to ensure we can continue to support our farmers with a fair price and continue sustainable growth of the brand, especially as we have not changed our pricing in several years,” explains Dan Chesbrough, business unit controller for grocery.

“Can flavoured milk justify itself as an essential grocery purchase,” she asks.

If not, it will have to sell itself as a justifiable indulgence.

Shaken up: the brands becoming a social success

Dairy drink brands are making a splash on social media. Many have ramped up their activity this year as memories of Covid restrictions fade, and events such as festivals popular become commonplace once again.

“This year, more than ever, we’re using social media to support our wider marketing plan for Arctic Coffee,” says Jo Taylor, brand manager at Crediton Dairy. Activity has included competitions to win tickets to the Tramlines and Boardmasters festivals.

Crediton worked with online influencers to help “further grow our brand awareness and drive trial while creating unique user-generated content that we can use in the future” adds Taylor.

Similarly, Shaken Udder has pushed its dairy-free range via an ‘influencer outreach’, which included Amelia Mist from Made in Chelsea.

The brand has also collaborated on social media promotions with brands including Higgidy, Pots & Co, Joe & Seph’s and White Rabbit.

Biotiful, meanwhile, has worked with the likes of lifestyle and fitness blogger Zanna Van Dijk. The kefir brand is “capitalising on the opportunity of creators who produce native, social-first content users want to see, and which educates, engages and entertains consumers on the benefits and functionality of gut health,” says Biotiful founder Natasha Bowes.

When it come to content worth seeing, the visual appeal of dairy drinks makes Instagram their natural home. Some brands, such as Jimmy’s Iced Coffee, have ramped up their presence on the platform. “We’ve improved the quality of the images we post on our social media,” says Jimmy’s national account manager Harry King.

“This is often utilised further as content by retailers who reshare in order to remind customers of the in-store theatre experience that F’real provides,” explains the brand’s marketing manager, Gemma Briant.

It also runs a dedicated Twitter account for retailers, to answer questions, promote in-store activity and offer guidance on the brand.

That seems like a cocktail for success on social.

Bega’s Better Farms Program supports eligible dairy farmers’ by offering up to $1.1 million worth of financial grants each year.