What will it cost at the end of 2022? That depends on the continued effect of flooding on prime dairy-production regions in New South Wales, Victoria and Tasmania, as well as on global economic conditions.

The Australian Bureau of Agricultural and Resource Economics and Science has projected a 28% increase in the farm-gate milk price in 2022-23 – to 72.5 cents per litre, a record high. With less milk being produced, it could be even more. 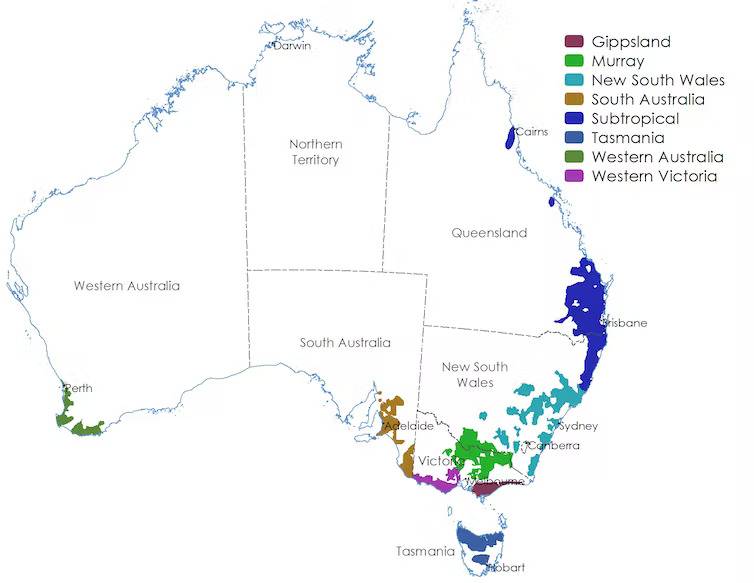 It’s a case of higher demand and lower supply. Production has been declining since 2014. In the first half of 2022, ABARES says milk production was about 7% lower than the same period in 2021:

This was driven by extreme weather events: a drier than average start of the year in southern Victoria and northwest Tasmania, flooding in regions of Queensland and northern New South Wales. Also, with export prices for Australian dairy products increasing substantially at the start of 2022, less milk was available to the domestic market.

Obviously, things aren’t all rosy. Some dairy farmers face the devastation of natural disasters. All face the same post-COVID challenges as other primary producers. Russia’s war on Ukraine has help drive up costs of inputs, from fertilisers to feed. Labour is hard to find.

But for all that, the record high farm-gate price is good news for an industry where the number of farmers has declined by a quarter in the past decade (from about 7,500 in 2011 to about 5,700 now).

This was abandoned in July 2000. With deregulation, farmers, processors and supermarkets were set free to negotiate prices.

In economic theory, free trade works fine when you have a large number of buyers and sellers, all with the same amount of information about what is happening in the market.

But in the milk industry, thousands of producers sell to a handful of milk processors, who then sell to even fewer retailers. The major supermarkets control almost 60% of total milk sales.

This is not always such a problem. It is not often you hear fresh producers screaming at supermarkets, in what is a very similar arrangement. But with the dairy industry, as noted in a 2021 report from the Department of Agriculture, Waters and the Environment, there is a “perceived market failure”.

Why? It has to do with how supermarkets have used their power.

To give time for the market to find an equilibrium, the Howard government introduced a “Dairy Adjustment Levy” of 11 cents per litre to support farmers through deregulation. This levy remained in place until 2008, when it was abolished by the Rudd government.

Then, in 2011, the “milk war” broke out. Coles had the idea of luring shoppers from Woolworths by selling milk at $1 a litre. Woolworths responded. Aldi joined the move. And the war kept prices artificially low for almost a decade. 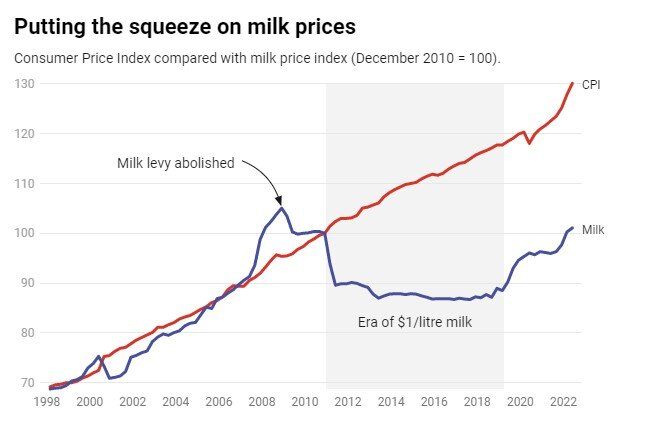 Many decided the effort was not worth it, and quit farming. Milk production peaked in 2014 then declined.

Supermarkets finally abandoned $1/litre milk in 2019, under considerable public and political pressure to acknowledge that, after eight years with no increase, some rebalancing was needed.

During this time, overseas demand for dairy products has also been increasing, especially in Asia. Now about 32% of Australian dairy production is exported – not as fresh milk, but as cheese, butter and other dairy products. (It takes about 10 litres of milk to make 1 kilogram of cheese, and 20 litres to make 1kg of butter.)

On top of that, lately US and European dairy farmers have had a hard time with drought, increasing international prices. The United Nations’ Food and Agriculture Organization’s Dairy Price Index increased by more than 17% from 2020 to 2021, and is expected to rise another 15% by the end of this year.

The projected 28% rise in farm-gate milk prices in 2022-23 will bring the value of the Australian dairy production to a record $6.2 billion.

Which is good news for the long term sustainability of dairy farming in Australia. You might not appreciate it, but to keep dairy farmers in business, a fair price must be payed for your fresh milk.

The quality rating of domestic dairy products has remained above 99 percent for six consecutive years, experts said at a webinar.