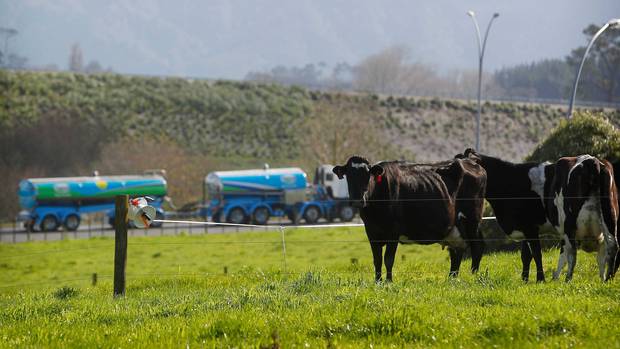 Fonterra said this week it expects to report a full-year loss of as much as $675 million. Photo / File

Fonterra Cooperative Group’s two biggest shareholders – Dairy Holdings and state-owned Landcorp Farming – say the latest downgrade will weigh on their own earnings and add to farmer malaise against a backdrop of already weak confidence.

The dairy exporter this week said it expects to report a full-year loss of as much as $675 million and won’t pay a dividend as it slashes the value of global assets. It will be the second annual loss in a row.

«This is a concern and will have quite an impact on farmer balance sheets and cash flow. Our hope is that Fonterra completes the strategy refresh quickly,» said Colin Glass, chief executive of Dairy Holdings.

He said farm cash flows are now more important than ever with «Fonterra and banks all looking to retain proceeds to build equity at the same time» and warned farmers’ patience is wearing thin.

«We need Fonterra to be successful, but acceptance from farmers acknowledging that Fonterra requires time, won’t last much longer,» Glass said. Fonterra also reported a loss in the prior year and embarked on a wide review that has already seen it sell a raft of assets, including the Tip Top ice cream business.

The latest Federated Farmers’ farm confidence survey – taken before Fonterra’s news – showed farmers are the most pessimistic they have been in a decade. A net 51.6 per cent of 1,432 surveyed farmers – more than half of them dairy farmers – expect economic conditions for farmers to deteriorate in the coming 12 months, compared to a net 40.8 per cent in January.

The twice-yearly survey is conducted by Research First on behalf of Federated Farmers.

State-owned enterprise Landcorp , which trades as Pamu, is Fonterra’s second-biggest shareholder with 6.9 million shares. Landcorp is scheduled to report annual earnings before the end of the month and in May, it lowered its forecast earnings before interest, tax, depreciation and revaluations by $10m to $27-$32m and citing the uncertainty over the Fonterra dividend payment among factors weighing on the result.

«Dividends from Fonterra make up a relatively small part of our overall income. However, obviously, no dividend from Fonterra does impact our profit and losses and the valuation of Fonterra shares has an impact on our balance sheet,» it said.

«Fonterra has previously signalled the challenging environment they are working in as they work to remodel their business.»

S&P Global Ratings meanwhile, said Fonterra’s move was a «painful but necessary part of the cooperative’s turnaround» but had no impact on its rating. S&P rates Fonterra at A-.

While the impairment charges were noteworthy, they are non-cash and «do not affect Fonterra’s fundamental risk profile,» it said.

Fonterra, meanwhile, is expected to provide more of an update at the annual result next month. The latest announcement, for example, did not touch on the value of its Soprole and Prolesur investment in Chile.

There was also no further write-down of the Beingmate Baby & Child Food Co stake after Fonterra announced plans to sell down its 18.8 per cent shareholding on market. Fonterra’s carrying value as at Jan. 31 was in line with the current Beingmate share price and yuan exchange rate.

Fonterra said it has already taken a $405m impairment on Beingmate last year.

It also underscored that the latest $200m impairment on Dairy Partners Americas Brazil has nothing to do with a current review of further ownership options, including a potential sale of its stake. DPA is a joint venture between Nestle and Fonterra.

«This review is ongoing. The impairment is unrelated to this process,» Fonterra said.