The farming organisation was commenting on the interim report of the Food Vision Dairy Group, which is due to be presented to Minister Charlie McConalogue shortly.

Macra has rejected a number of the 17 potential measures contained in the report which aim to support the mitigation of greenhouse gas (GHG) emissions from the dairy sector.

The group also has “serious reservations” about the feasibility of the timeframes to achieve the proposed targets.

Macra’s main issues with the report centre on what it describes as “the cow reduction scheme”, along with targets for chemical nitrogen (N) reduction in the short-term.

“The proposal will limit the productive capacity of farmland while also increasing the competition among farmers for the remaining available land,” he added.

“This proposed scheme plays absolutely no role in facilitating generational renewal. It is beyond comprehension that we would not want to encourage more young people into the sector.

“With numbers of young people actively farming at an all-time low, at just under 6%, and the department [of agriculture] putting up more obstacles, the question needs to be answered [is]: Are we pursuing food production or food reduction?” Keane stated.

The Macra president explained that the proposed chemical N reduction will pose huge challenges for the sector.

“What it essentially means is that farmers across the country must have 20% of their farms sown with clover by this time next year and acquire the knowledge to manage such swards in order to have any chance of meeting the target reduction outlined,” he said.

“The outcomes of these proposals will be food reduction and fewer young people entering the sector as the opportunities that exist become curtailed,” Keane concluded.

Minister Charlie McConalogue yesterday (Wednesday, May 25) welcomed the progress made by the Food Vision Dairy Group.

It came as the group’s chair Prof. Gerry Boyle presented an update to the Food Vision 2030 High-Level Implementation Committee.

Eleven organic dairy farms in Vermont closed in 2021. The next year, 18 more followed. And this year, the Northeast Organic Farming Association of Vermont expects to lose another 28 farms. 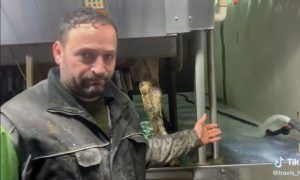