Healthier animals are more productive: They will be naturally more fertile, daily growth rates will be enhanced, all whilst the costs of achieving this will fall dramatically.

Such an approach to herd management will also help Ireland’s dairy industry respond positively to the challenge of climate change: Driving improved efficiency within businesses is the most clear-cut way of reducing their carbon footprint values.

Farmers who commit to herd health plans that include the use of regular vaccination programmes, while also making optimal use of milk recording, represent an approach to herd management that will gain increased momentum during the period ahead.

Meanwhile, at a national level, the Irish government recognises the absolute importance of dairy farmers putting improved animal health as a fundamental priority for the sector as a whole.

One obvious outworking of this has been the decision taken to significantly curtail the use of traditional methods across agriculture as a whole. New measures, to this effect, will be introduced very shortly.

For their part, milk producers recognise the fact that some animals will still get sick, no matter how high the overall health standards achieved within a herd actually are.

In these circumstances, there is also a growing awareness that it is possible to naturally stimulate an animal’s own immune system, thereby achieving the restoration to full health in a totally holistic manner.

Last year, their Slievebawn Herd averaged 630kg of milk solids with between 1.5-1.6t of meal fed/cow.

“The herd is split into spring and autumn-calving groups. In volume terms they averaged 7,500L of milk last year,” Michael said.

“Our aim is to get as much milk as possible from grazed grass.

Much is made of the term ‘family farm’ when describing the basic structure of Irish agriculture. But in the case of the Gunn family, this is a very accurate way of describing their approach to the farm.

Michael’s wife Miriam is totally involved with the business, as are their children: Olivia, Kieran, Diarmuid and Aidan.

“It really is a case of the three generations getting involved,” Michael explained.

From a herd development point of view, the objective set by the Gunns is to improve the levels of solids.

“Obviously, this will mean making better use of grass, both in terms of its production and utilisation,” Michael commented.

“Sustainability is a key objective for the farm. From an environmental perspective we were one of the first farms to use low emission slurry spreading systems in this area.

“We have a trailing shoe system attached to our slurry tanker while our umbilical system is used in tandem with a dribble bar.”

“But it’s often overlooked that financial and economic sustainability will always remain fundamental priorities for any business,” he said.

“If we cannot make a living from the farm, then the farm won’t exist – it’s as simple as that.

“In our case, grass is the cheapest feed that we can offer our stock. And this principle holds on every Irish livestock farm.

“We feed our grass to the animals 365 days of the year. If they aren’t grazing it, then they have full access to the silage made on the farm.

“We specifically changed the breeding policy, followed with the herd in order to produce smaller cows that were more robust, but which were also naturally better at producing high-quality milk from forage.

“This is an approach to farming that has sustainability wholly benchmarked within it. And it’s imperative that such a commitment is fully recognised by both consumers and the government.”

Reducing the level of traditional methods used within their business has been a priority for the Gunn family over the past number of years.

“We have known for some time that the government would act to reduce the usage of traditional methods within the dairy sector,” Michael said.

“But in our own case this was not the reason, driving our commitment to using natural ways to support our animals’ own immunity.

“We are totally committed to delivering the cleanest environment possible for the cows. But even in this context, the odd animal will still flag-up with udder health issues.

“The real problem though was finding companies that could deliver for us when it comes to managing health-related problems within the herd in a totally holistic manner.

“It was, very much, a voyage of discovery.”

Through a combination of seeking advice and actively searching on the internet, the Gunn’s became aware of Animal Health Vision (AHV). In terms of the company’s background, the services it offers and the products it has brought to market, it was a perfect match for their requirements.

“Initially, AHV had yet to set up a company network in the Republic of Ireland,” said Michael.

“The company was operating solely out of their base in Augher, Co. Tyrone. However, in recent years they have established a fantastic set-up in Portlaoise and provide local area consultants to all parts of the country.

“Customers can also avail of the advice of their Veterinary Technical Specialist, Siobhan Regan.

“Initially, we committed to using the AHV Extra Tablets on cows that had udder health issues. From the get-go, I was very impressed with the direct service the AHV team offered,” the Co. Roscommon man continued.

“They came to the farm and walked us through the rationale of the products and how they worked, but it was still a pretty big act of faith to administer the first tablet. We were specifically told that it would take a few days to gauge its full impact. 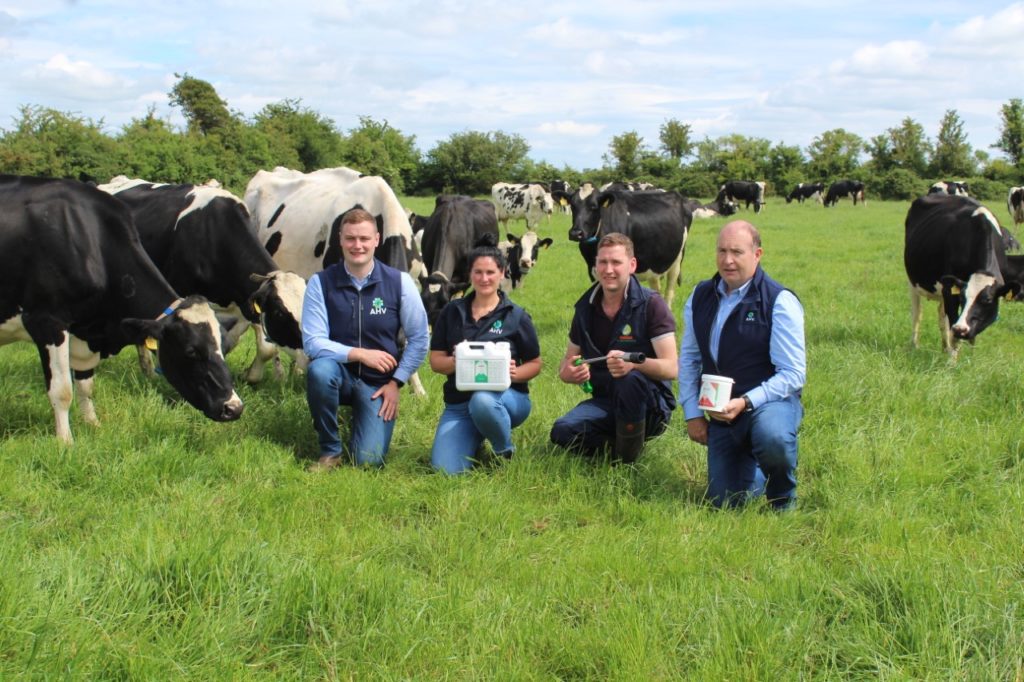 “And this is correct: The amount of curd coming out of the cow actually increases for a day or so after their administration.

“But, invariably, the animals came back to full health quite quickly. Their milk production has been retained in full and losing quarters to the disease has never been an issue.”

Since joining forces with AHV, udder health across the Slievebawn herd has improved.

“Miriam keeps detailed records of every cow, above and beyond what’s required for the Bord Bia scheme,” Michael said.

“So we know exactly how each cow is faring in real time, relative to her own health history.”

Michael has been particularly impressed with the impact of the AHV ASPI.

“From an udder health issue point of view, it supports the animals ability to improve blood flow to any swollen areas.’

“Improving the animal health status of our herd is critically important. And we are looking at this issue from a number of different perspectives.

“Improved breeding is part of the solution, as is the implementation of effective vaccination programmes.

“Milk recording is the most valuable management tool available to us. Implementing selective dry cow therapy-related programmes is a must for all dairy farmers wanting to reduce traditional methods with their businesses.

“But this is only possible if cows are milk recorded on a regular basis.

“And, finally, in our own case, we have found that working with the AHV team has brought new thinking to bear when it comes to promoting optimal heard health.

“They have proven to us that it is possible to boost animals’ own immune systems in order to restore full health using means that are not dependent on traditional methods.”