Another interest rate hike by the Federal Reserve last week means unless you’re sitting on a lot of cash, buying farmland will become even more expensive. Both agricultural lenders and economists are watching the possible impact higher interest rates will have on not only the number of farmland sales, but the price.
Share on twitter
Share on facebook
Share on linkedin
Share on whatsapp
Share on email
Comment

Just a year ago, the bull-run on Iowa farmland sales continued to play out. Less than two weeks after a piece of farm ground in Iowa sold for $19,000 per acre, a new record sale was posted in Iowa Friday, cashing in at $22,600 per acre. Those sales sparked a number of record sales through the second half of 2021 and the first half of 2022.

The summer issue of “The Feed” by Farmer Mac just released acknowledges the current agricultural economy has some resemblance to the economy leading up to the Farm Crisis of the 1980s. However, economists point out there are key differences that indicate 2022 is different. As a result, Farmer Mac says agriculture is in a strong position and far better prepared to withstand a possible downturn.

Surviving an economic downturn is one thing, but making major investments – like in farmland – is another. Jackson Takach, chief economist for Farmer Mac, says the current environment of rising interest rates could impact farmland investments, and in turn, farmland values.

“People think about more long-term impacts of their investment in agriculture,” says Takach. I’m going to think about what is my return or what is my cost on buying that piece of land or selling that piece of land? Higher interest rates raises that cost of capital for farmers, either existing farmers, people who want to get into farming as an investment or as a new farmer.”

“We care what happens to land values, and we care what happens to land transactions to make sure there’s a robust market for people who want to buy and sell and mortgage agricultural property. “So we focus on this a lot,” says Takach. “So far, in the second quarter, there’s still a great deal of activity. So farmers are putting land on market and those transactions are clearing, but I think the higher interest rate environment certainly puts a little bit of a break on that.”

Takach thinks Q3 of 2022 could reveal a changing storyline for the aggressive run-up in land values over the past year.

“Maybe less land is going to come up for sale in the third quarter, and those transactions might start to trade at lower prices, just as some of those investors in agriculture – and farmers – who want to buy the adjacent property start to rethink those decisions,” he says.

“July marked the second consecutive 9-point decline in the short-term index leaving it 20% below its 2021 peak reading,” co-authors Jim Mintert and Michael Langemeier wrote in the latest barometer release. “Weakness in the short-term index the last two months was primarily attributable to a shift away from expecting higher farmland values to expecting values to remain about the same. The rise in the long-term index occurred because of a shift away from expecting values to decline to values rising over the next five years. 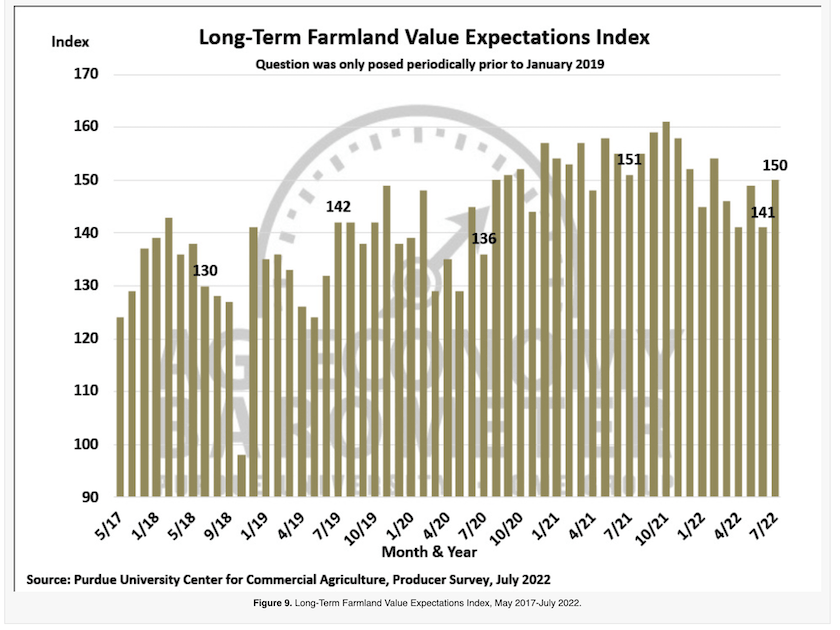 The economists say the farmland indices don’t always move in tandem, but this month’s moves were something that seemed significant.

“The magnitude of this month’s divergence between the short and long-term indices is unusual. Producers who expect values to rise over the upcoming 5 years continue to say that non-farm investor demand and inflation are the two primary reasons they expect values to rise,” they said.

Pro Farmer Crop Tour gives you the opportunity to select your Tour stop or watch online from wherever you are.

Register and attend nightly meetings in person or watch the nightly broadcast live at 7 pm each night where you’ll receive daily results, scouting observations and historical comparison data from our tour leaders.

China’s dairy imports have slowed amid rolling Covid lockdowns and a weakening economy that has many analysts slashing their 2022 and 2023 economic growth estimates for the country.