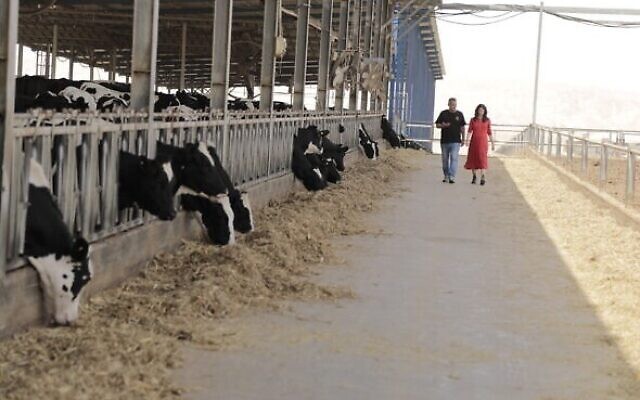 Yotvata project will allow female calves to stay with mothers until weaning — but male calves will still be separated, sent off for fattening and slaughter.

The Yotvata dairy farm in southern Israel is launching the first pilot project of its kind in an industrial cowshed in Israel — and will not separate female calves from their mothers right after birth.

The project will be run at a relatively new cowshed at Moshav Idan in the southern Israeli Arava desert, Zman Israel, the Times of Israel’s Hebrew language sister site, reported.

The widely practiced separation of calves from their mothers within an hour of birth has attracted increasing criticism both from within the dairy industry and among animal rights activists. It creates severe distress for mother and calf and is seen as aggressive and cruel.

When the male calves are several days old they are sent off for fattening prior to slaughter — and that will not change. The project, planned to launch next year, will apply to newborn females, who are currently also separated from their mothers and taken after a few days of isolation to join other calves in a kind of crèche.

Veterinarian Sivan Lacker traveled to Europe to see how leaving calves with their mothers can be done. There, dairies tend to be smaller than they are in Israel, which is why Moshav Idan’s cowshed, with just 360 cows and an average of 150 births per year, was chosen.

“We’re starting it gradually and very much want it to succeed,” said Ashkar Genosar, milk receiving and manufacturer relations manager at Yotvata Dairy. “We think it’s very important and hope that it will work from a health and technical standpoint. There are 23 cowsheds that work with us and when we suggested it to the manager of the Idan cowshed, she was very enthusiastic.”

Health risks facing calves include exposure to disease and entry into the cowshed of predatory animals, Genosar explained.

The idea is that the female calves will stay with their mothers for three to six months until weaning, after which they separate naturally. The youngsters will then join a group of their own age.

Genosar said that while the farm would lose the milk fed by the cow to its calf, studies showed that calves fed by their mothers went on to be healthier and stronger and to give more milk in the long run than those that had been separated from their mothers at birth.

Furthermore, the current practice of keeping and feeding calves in a separate “kindergarten” had substantial costs, which would be saved by allowing mother and calf to stay together.

“To the best of our knowledge, there is no such thing [as keeping cows and calves together] in the world of industrial cowsheds,” Genosar said.

Yotvata Dairy is one of the largest producers of dairy products in Israel and jointly owned by Kibbutz Yotvata and local food giant Strauss.