grass | Keeping it simple on grass

grass | Keeping it simple on grass 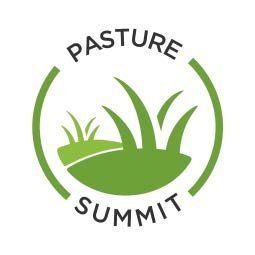 Nathan and Courtney Joyce are young Taranaki farmers driving their profitability and equity growth by embracing the principles of an efficient pasture-based system.

With a young family and two farms side by side north of Manaia, in South Taranaki, Nathan and Courtney have developed a simple system that works for them and has allowed them to buy their first farm this season.

“We run a simple pasture-based system that we try to keep simple and easy to understand by everyone and with the end goal being to generate high profits.”

At the 2022 Pasture Summit field day in late September Nathan laid out the system that has allowed them to grow and progress in the industry.

In their fifth season leasing the Taikatu Plains farm, running 300 cows, a 30-aside herringbone shed and a simple farm layout, the couple are targeting 130,000kg milksolids (MS) for the season.

“Trying to keep our operating costs as low as possible will result in good profits at the end.”

Nathan said he and Courtney set goals at the start of their farming career, to get to farm ownership and with the support of their parents they have been able to buy the farm next door, which they are very happy about.

The couple’s farming philosophy is to run a sustainable and resilient business with low costs, and a simple repeatable system, while enjoying the lifestyle and keeping up with changing farming regulations.

“We want to make sure the farm is running really well so that if opportunities come up, we are in a position to take them.”

Nathan explained that they lease the farm off really supportive owners and are lucky to have the assistance of hugely supportive staff. Courtney takes care of all the accounts and wages and looks after four children.

“Onfarm, the staff play a huge role in the day-to-day operations and we appreciate that they are really good communicators – which helps the business to run really smoothly.”

Nathan and Courtney are consistently about 20% above the South Taranaki benchmark for pasture and crop eaten, DairyNZ principal scientist, new systems and competitiveness Jane Kay said.

Nathan shared his key driver and targets behind the grazing management and achieving them year in and year out.

Nathan said optimising the system is really about managing the inputs and trying to be efficient with anything put into the system.

“We are trying to get a return on investment on all the inputs we put into the system – rather than focusing on a wide range of things, we think about how we are optimising our system, trying to work smarter not harder.

The couple buy in 100 tonnes of maize for the early autumn feeding and 90t of palm kernel to add in Jan/Feb/March. In the past they have harvested silage on the farm and then bought in a top-up of an extra 50/60t of bulk silage to allow the cows to be fully fed and milk twice a day right through the season. Looking after the pastures has been a focus for Nathan to avoid having to renew whole swards.

“We go through and undersow any areas that need it, but we have just tried to look after the grass we have – we believe the pasture is resilient and if you feed it with the right fertiliser it goes well.”

Even though they are focused on controlling costs, there was a big jump in farm working expenses from 20/21 to the 21/22 season. 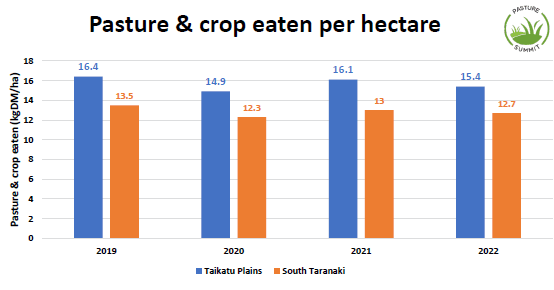 “We are not changing our system, but we had a wet spring last year and then managed to stack on almost a dollar per kg MS.”

Based on the breakdown of costs from the 2020/21 season, Taikatu Plains sat at $4.03/kg MS c.f. the benchmark at $5.21/ kg MS. The supplement cost was half that of the South Taranaki benchmark ($0.65/ kg MS vs $1.20/kg MS) and both the Joyces’ repairs and maintenance (R&M) and depreciation costs for the season were under a third of the cost compared with the benchmark, which Nathan suggested reflects their lower rate of supplementation on the lease farm.

He explained their R&M has been higher in the past but was pretty low in the 2020/21 season ($0.15/kg MS c.f. $0.48/ kg MS for the benchmark.) Fertiliser and nitrogen costs are also well under the benchmark for the season ($0.22 c.f. $0.39/ kg MS). All cows are wintered on the farm and weaners grazed out from December to May when they come back for calving.

With a 23% replacement rate Nathan prefers to keep the mating simple with bull of the day for 4.5 weeks followed by six weeks of natural mating.

With no intervention and no premating recording of heats, Nathan is happy with the 78% six-week-in-calf rate and 7-8% empty rate, saying their huge focus is on feeding the cows well and a simple tail painting and heat patches system

A doubling of the cost of nitrogen is something he thinks about all the time, Nathan said, but he still thinks it’s a cheap form of feed so he has been concentrating on making better use of it.

“We need to get the right response, not put it on willy nilly. With the N caps we have dropped our input to 180kg N/ha and we have a new philosophy to not apply it in Dec/Jan and Feb – we will only apply it when we are going to get the best response.”

While the purchased N surplus metric farmers are given from their milk company is a simple metric to understand in terms of N into the system from feed and fert less N leaving in meat/milk, Ravensdown chief scientific officer Ants Roberts suggested it was a poor indicator of N loss through leaching and related water quality.

“The purchased N surplus metric is not good enough to measure how efficiently you are using the N you are bringing in.”

He asked Nathan to outline the triggers he used to apply nitrogen. Nathan shared they have recently reduced N application to fit under the 190kg/ha/year N cap, applied in six or seven applications during slow growth periods during the shoulders of the season.

“We follow the grass growth curve with a 37kg N application in autumn to stimulate a pasture surplus heading into winter, followed by another application in the winter, then spring and none in the summer.”

Ants suggested that with no N application, the right pastures and clover mix and good pasture management the South Taranaki area should grow 14-16t pasture/ha if the season was optimal – not dry or badly affected by grass grub etc.

“You could design a profitable dairy system here without any N application, producing 1200kg MS/ha and 3.6cows/ha, but applying up to 190kg N/ha you should be able to produce an additional 2t/ha pasture.”

Some key things from Ants about N fertiliser response:

Nathan referred to how important it was to have a great team to work with, and said Jonathan Magnaye and Maria Atlas, who have been with the Joyces for one year as manager and 2IC, are exactly that team.

The couple work a 12:2 roster, with every second weekend off.

“We are able to make decisions together, on pasture management and breeding and they are always keen to take on more responsibility.”

“I think it’s a mutual thing – I try to treat the staff as I would like to be treated. I have learnt from them, to be a better communicator and to consider work/life balance.”

“We try to make sure everyone turns up and enjoys their role and adds value.”

“To attract good staff I think it’s important to show them we are very organised, we understand them and we work on the presentation of the workplace, and then to retain them we need to look after them and help them grow.”

The He Waka conundrum

Knowing your numbers so that when policies are made you can decide which way to go was DairyNZ principal scientist, new systems and competitiveness, Jane Kay’s advice to dairy farmers on the methane emissions conundrum. The key driver for methane emissions is feed eaten, Jane Kay told the Pasture Summit field day. Because Nathan and Courtney Joyce are high profit and have a high amount of feed eaten, their enteric methane emissions are sitting about 11t CO2-e or 450kg CH4/ha/year.

“I have run some numbers on the He Waka proposal and at 11c/kg methane the cost to the Joyces would be 3c/kg MS, so $3900 in the first year.”

Jane outlined the work DairyNZ are looking at to try and decouple the high feed eaten, high methane emissions equation.

“You will have heard of the 3NOP work, the seaweed, the bromaform, and we are investigating forms of delivery of an inhibitor, for example through a controlled feed machine like a Zeddy machine.”

More work is focusing on the probiotic, inhibitory effect of calf products, to try and modify the rumen at a young age to produce less methane.

Further work on low-methane dairy cattle was also outlined, with LIC testing bulls at the moment to identify low-methane-emitting bloodlines.

On a feed basis, research is concentrating on how to drop the national inventory, to manage it better in the system and how to use other forages/ feeds as a tool to reduce CH4.

The quality rating of domestic dairy products has remained above 99 percent for six consecutive years, experts said at a webinar.