Three organic dairy farms are hopeful that another milk processor will soon be able to take them on after Danone/Horizon informed them they would be losing their milk market.

Some 178 organic producers who sell their milk to Horizon/Danone received letters last summer informing them that it was too expensive to pick up milk in the Northeast and would no longer have a market on Aug. 31, 2022. Earlier this month Danone/Horizon provided an option to extend those milk contracts through the end of February 2023 as part of a transitional plan that also offers additional financial support for affected farmers.

Four of the farms affected were in Franklin County.

More Acres is owned by Leslie and Judy Smith and their son Matt worked the farm with them. They learned about the contract situation earlier than others as they had inquired about Matt’s taking over the business. The company suggested they wait as a letter would be coming out shortly.

Since then the dairy cows have been sold. There were a variety of reasons, a family discussion was held after the letter came, Judy Smith said Monday, Dec. 20.

The elder Smiths’ ages and concern over what beef prices would be if a solution couldn’t be found forcing dairies to ship their animals were factors, she said.

“Matt decided he didn’t want to deal with the whole thing, wanted to get done,” Judy said. “Leslie made one call got the herd sold. They went to another organic producer in Maine.”

The beef cattle were kept and Judy is busy training a pair of working steers.

“I’m having fun with that,” she said. “We did keep a couple heifers. It’s different for sure. I do miss it.

“The cows were more than just numbers, they all had personalities, were part of the family,” she noted. “I hope markets can be found for these farmers. There just aren’t many options.”

Mark Turner of MT Farms in Jay was still waiting for answers Monday. He said Organic Valley, another organic milk company has been visiting farms and he has heard some farms may try to sell their own product.

“Danone’s announcement gives us more time I guess,” he said. 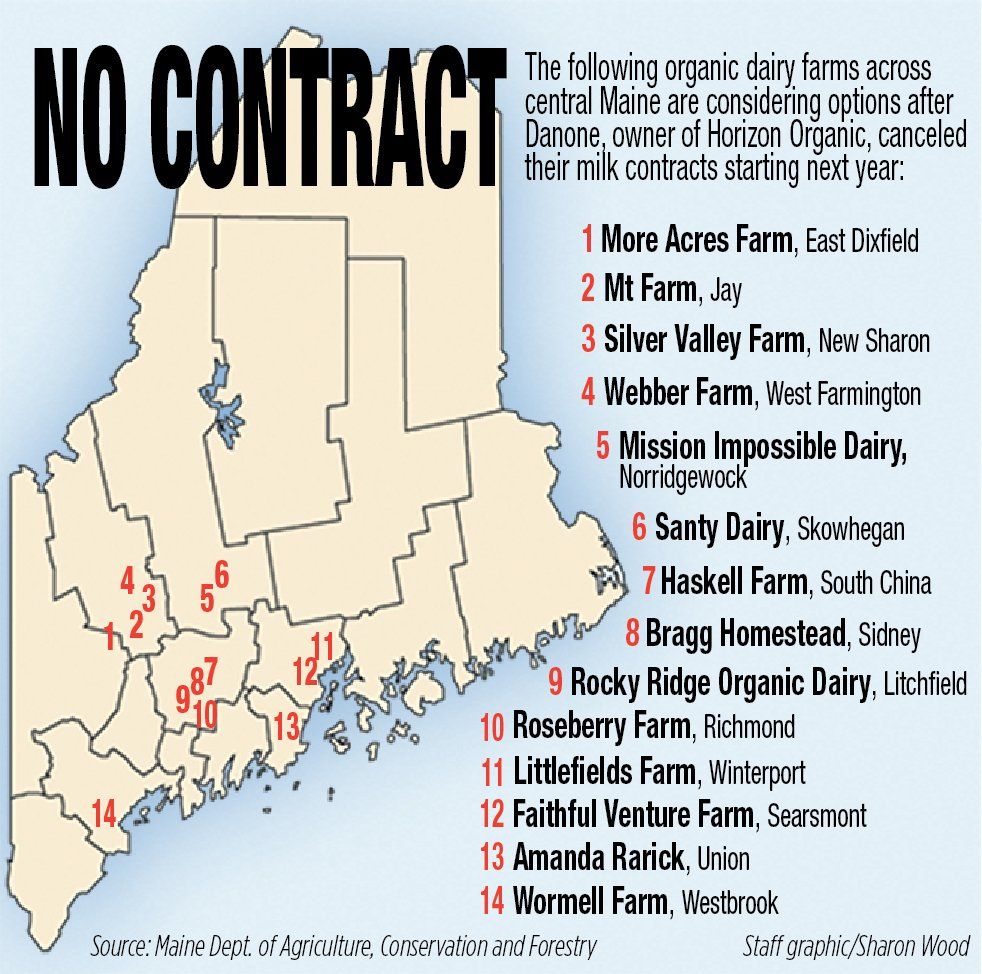 Danone North America’s four-point plan, announced Monday, Dec. 13, was detailed in a letter to state officials and dairy farmers. The plan would:

• provide the affected farmers the option to extend their current contract by six additional months, concluding at the end of February 2023.

• provide a “transition payment” to the affected farmers for their milk during the last six months of their agreement.

• provide access to farm financial consultants specializing in providing support for the agriculture community at no cost to the farmers.

• offer to work with stakeholders, including state and federal government agencies, to explore investment solutions such as a co-op to address the hauling and transportation challenges or low- to zero-interest loans

“September through winter is when they need the milk, Organic Valley does too,” Turner said. “They’re not really trying to do us any favors.”

In the meantime, Turner and his family will continue what they have been doing. They do have the option of returning to Agri-Mark, a conventional milk market, and Organic Valley called to ask more questions, he said. “They’re working at it.”

Sam Webber was still milking his cows Monday in Chesterville.

“If someone else will take us on, I’m going with them,” he said. Organic Valley is trying pretty hard to make it work, probably in the fall when they can use the most milk, he noted.

If Organic Valley can’t take them on, Webber will probably sell the cows. He currently has one full-time helper, the grandson of the former owners. Help is kind of hard to get, he added.

“I practically work for free now,” Webber said. “I once had two full-time hired help and made money on 40 cows. Now I have one full-time helper, milk 50 cows, my wife works and I cut wood, do other things. The price of milk has gone from $38 (per hundred pounds) to about $29.

Tuesday Jim Davis of Silver Valley Farm in New Sharon said cows are still being milked, they have been looking at other milk companies. Organic Valley is one possibility.

“Their representative said it would be less challenging because they already have so many other farms in the area,” Davis said. “The business is pretty hopeful they’ll pick us all up so we can all stay in business and no one will have to go out of business.”

All eggs are being put in one basket for now, he said adding, Organic Valley hopes to give a heads up fairly early.

“If that doesn’t happen we may sell the animals, raise crops,” Davis said. “It’s hard to know for sure. We could try to establish our own milk market but that adds a whole other spectrum to the business.”

The contract extension offer from Danone/Horizon was because of the need for milk, he said.

“Horizon has projected they’ll be short on milk, figured they could use our milk,” Davis said. “I don’t think it had anything to do with the politicians, but maybe.”

One of the last working dairy farms on Ukrainian-controlled territory in the eastern Donbas region is doing everything it can to stay afloat in a place where neither workers nor animals are safe from war.

Wisconsin produces the best curds, Colby and 22 other cheeses, per the American Cheese Society contest

Wisconsin produces the best curds, Colby and 22 other cheeses, per the American Cheese Society contest