On a seasonal basis (Jun-Aug), this is a strong start to the beginning of the 2022/23 year with demand for butterfat offsetting the slowdown in WMP shipments. In fact, this has been the strongest start to a season on record. Regionally, shipments to Southeast Asia have been the most impressive this season, driven by whole and skim milk powder volumes moving to Indonesia. As an individual country, exports to Algeria have been the strongest over the last few months as NZ ships robust amounts of WMP; however, 2021 was historically weak as Algeria increased purchases from Latin America during that time. While milk powders have been lower to China, they actually expanded into August. Every commodity reported growth to China in August with the exception of skim milk powder. After WMP, cheese and fluid milk volumes were the strongest. 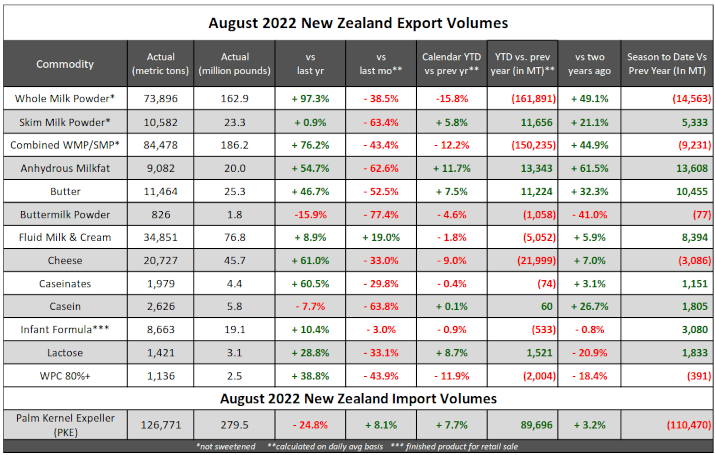 Stronger volumes from the US were in the form of whey and lactose. Total dry whey imports were UP versus prior year for the first time since September 2021 to break a ten-month streak of weakness. Product from the US accounted for a majority of the gain, UP 8,421MT or 34% versus prior year to the highest August total on record and the largest monthly volume from the US of any month since May 2018. Skim milk powder was below prior year levels for the sixth consecutive month, but losses are getting lighter as imports rose to 7-month highs. Product was higher from New Zealand, UP 1,922MT or 27% with the country claiming 28% market share. The largest year over year gain was in SMP from Australia, UP 2,707MT or 85% to the highest August shipments on record from the country. The infant formula growth is noteworthy but against a very weak prior year. Much of the growth is a resurgence in demand for Dutch product, UP 70% or 5,210MT from prior year to 12,622MT, 45% market share. Imports from New Zealand were also strong, UP 54% or 2,082MT YoY to 5,919MT. 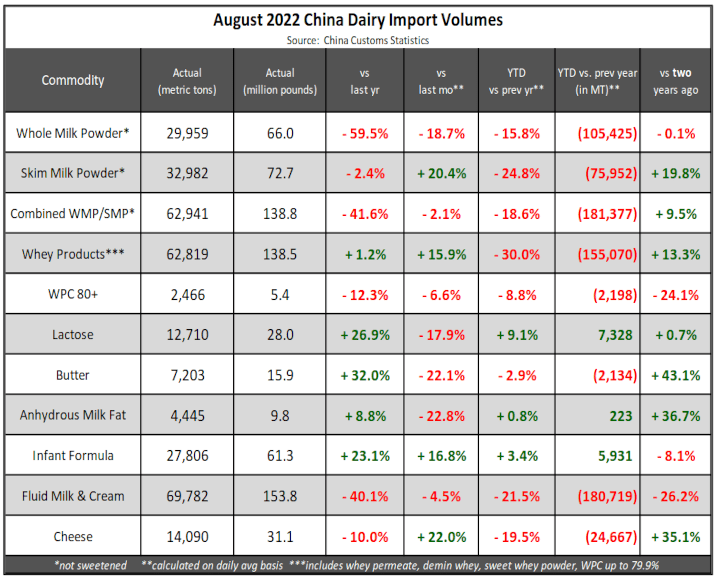 July dairy exports were the worst for the month in five years due to continued steep losses in Fluid Milk & Cream shipments moving to China. As a result, this was the lowest month for fluid milk & cream exports since December 2019. Skim milk powder (SMP) volumes were weak yet again, the lowest July observed since 2016 led by a slowdown in Demand from China, Nigeria, Ghana and Malaysia. The EU reported lower cheese shipments into the top three destination countries, the US (11,817MT, -1,940MT YoY), Japan (11,106MT, -907MT YoY) and Switzerland (5,601MT, -355MT YoY). Total dairy exports to Southeast Asia were the lowest since November 2020 as smaller whey, milk powder and lactose volumes were shipped to the country. The US had competitive pricing heading into July, so the region turned to the US to secure needs. 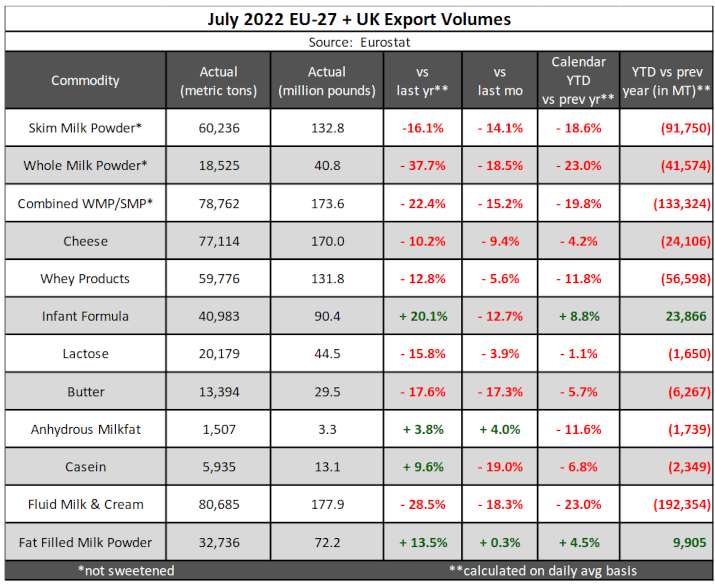 This year marked the strongest August trade data into multiple key regions: North America, East Asia, South America, Central America and the Caribbean. The largest increase over prior year by volume was into East Asia, driven by whey products and lactose heading to China. Even more noteworthy, August 2022 was the strongest month on record for dairy exports moving to China. Cheese exports were the largest for August on record as shipments to Mexico reached a five-month high, UP 23% from prior year to 11,776MT. Growth was also strong to South Korea as the US shipped 7,466MT, UP 31% from a year ago. Butter shipments climbed to the highest volume recorded since April 2014, more than double prior year levels as butter prices, although elevated, remain competitive with European markets. 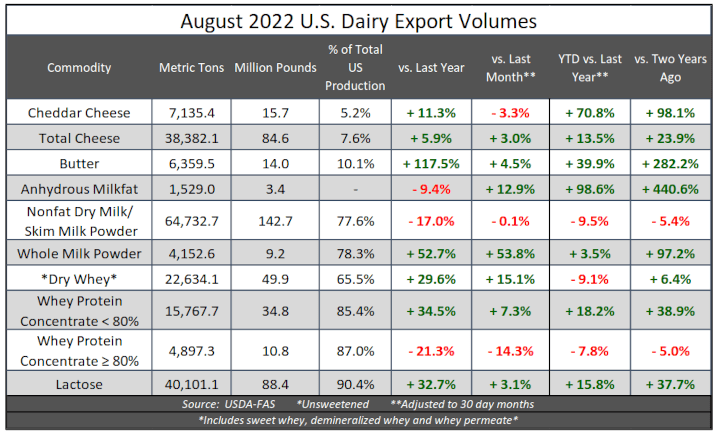 Bega’s Better Farms Program supports eligible dairy farmers’ by offering up to $1.1 million worth of financial grants each year.