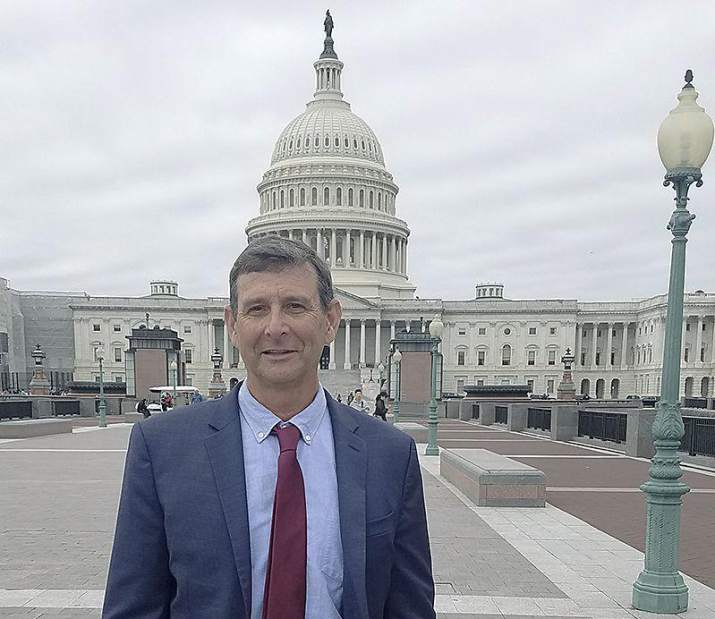 Steve Pierson, of Sar-Ben Farms in St. Paul and a member of the board of directors for Organic Valley, testified before the House Agriculture Subcommittee on Biotechnology, Horticulture, and Research on Oct. 30, 2019, at the U.S. Capitol. (Organic Valley/via Capital Press)

An organic dairy farmer from the Willamette Valley is pushing the U.S. Department of Agriculture to finalize its proposed rule for transitioning livestock under the National Organic Program, saying inconsistent interpretation of the standard has put his operation at a competitive disadvantage.

Steve Pierson, of Sar-Ben Farms in St. Paul, was part of a panel that testified Oct. 30 before Congress about the state of organic agriculture.

The panel provided grower perspectives to the House Agriculture Subcommittee on Biotechnology, Horticulture and Research, which has jurisdiction over organics. According to the Organic Trade Association, U.S. organic sales topped $50 billion for the first time in 2018, including $47.9 billion in organic food sales.

Pierson serves as a board member for Organic Valley, the country’s largest organic farming co-op. His testimony focused on challenges in the dairy industry, such as regulatory uncertainty over organic standards.

Specifically, Pierson highlighted the need to clarify the “Origin of Livestock” rule, which guides how dairies transition to producing organic milk.

The USDA issued its proposed Origin of Livestock rule in 2015. It allows dairy farms to transition cattle from conventional to organic over a 12-month period, where the animals are raised using organic farming practices — that is, they eat organic feed, graze on organic pasture for at least 120 days and cannot be given any growth hormones, among other requirements.

Pierson said the rule is meant to be a one-time event, but a few organic certifiers and producers have interpreted the standard differently, using the 12-month period multiple times to continuously transition new herds from conventional to organic.

Rather than raising cattle 100% organic from birth, Pierson said farms will raise calves conventionally during the first year before beginning the organic transition in year two. The difference in cost is estimated to be $623 per animal.

For Sar-Ben Farms, which became certified organic in 2005 and milks 300 cows, that puts them at a disadvantage of $45,000 per year, Pierson said.

“This is not a widespread practice,” Pierson told the Capital Press. “Very few milk buyers will even allow this. Organic Valley will certainly not let any of our producers do that.”

The USDA reopened its public comment period for the 2015 proposal on Oct. 1. It will run through Dec. 2.

Pierson said lawmakers he met with in Washington, D.C. — including Sen. Jeff Merkley, D-Ore.; Rep. Kurt Schrader, D-Canby; and Rep. Collin Peterson, D-Minn., chairman of the House Agriculture Committee — were “in lockstep, 100%, that this is a technicality that needs to be addressed.”

“It’s a fairly technical point that we’re trying to clear up,” Pierson said. “We’re not really asking for a lot. It’s just clear and precise interpretations to make sure we’re all playing by the same rules on a level playing field.”

Adam Warthesen, director of government and industry affairs for Organic Valley, said misinterpretation of the Origin of Livestock rule threatens to put the vast majority of dairies in Oregon that are following the one-time herd transition at the same financial disadvantage as Sar-Ben Farms.

Organic Valley, based in Wisconsin, represents nearly 2,000 farmers in 34 states across the country with over $1.1 billion in sales. In addition to dairy, the co-op markets a variety of organic products including eggs, produce and meat.