The international food conglomerate that announced it was severing ties with northeastern dairy farms in August is now offering a transition plan that includes the option of extending dairy contracts for six additional months and additional financial support for affected farmers.

But four months after they initially received word that Horizon Organic and Danone North America would not extend contracts beyond August 2022 with organic dairy farmers in Maine, Vermont and New York, those farmers still don’t have a clear vision of what lies ahead. There are 14 Maine organic dairy farms affected, most located in the central and midcoast regions.

Joseph Roseberry is one of them.

Roseberry, who was among the early adopters of organic practices at his Richmond farm, said Wednesday that he does not have a lot of options.

In October, the New Hampshire-based Stonyfield Organic announced it would invite a number of the affected farms into its direct supply program in the near future while acknowledging that it is a challenging time for the organic dairy market to absorb more producers.

The problem, Roseberry said, is that markets for the additional milk they would be taking on have to be developed.

The offer by Danone North America falls short of what Gov. Janet Mills and state officials had asked for in the wake of the August announcement.

“This is a modest but welcome development in a still very difficult situation for the families of our impacted dairy farms who are worried about their future,” Mills said in statement released Wednesday. 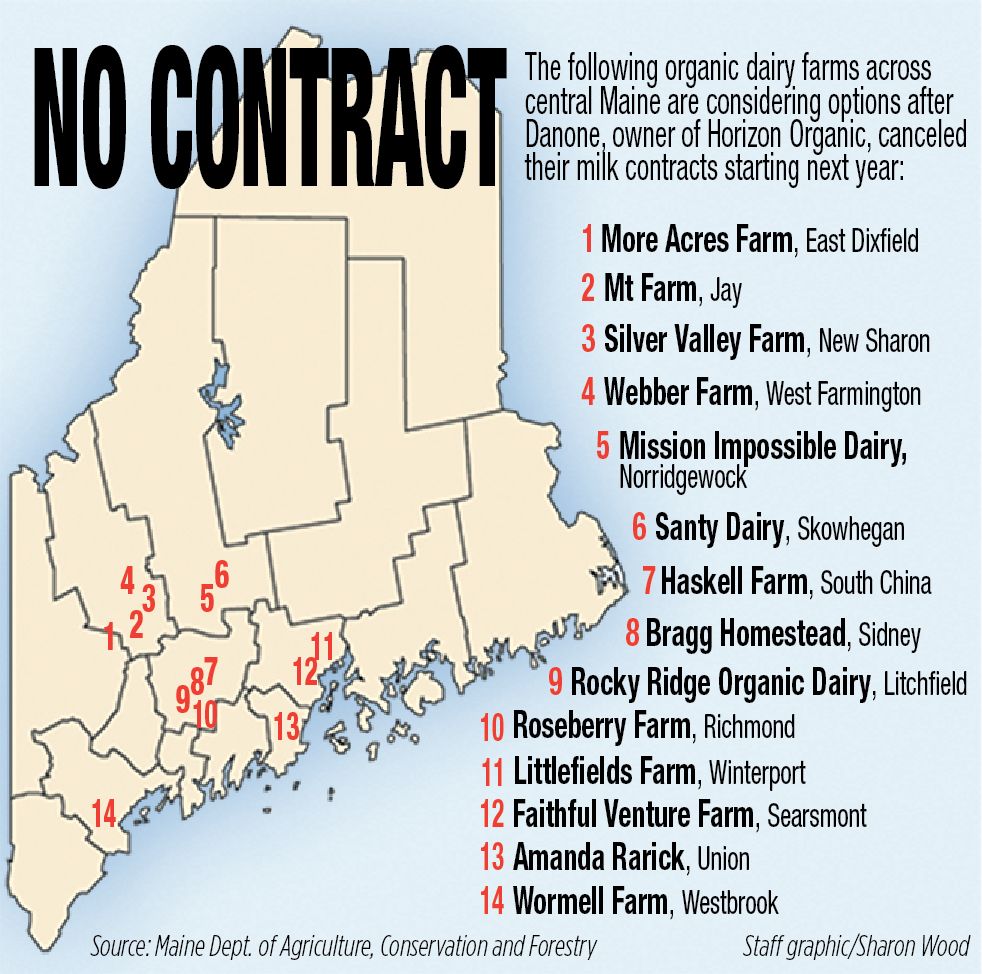 “While I appreciate the extended support of our hardworking dairy farmers,” Mills said, “I know there are still many challenges ahead as a result of Danone’s decision not to renew its contracts.”

Aside from the contract woes, Roseberry said his problem is finding help. He’s 76 years old and starting to slow down, and his brother, age 70, has Parkinson’s disease, which makes working difficult.

“There’s no one else to do the work, so we’re wondering just how much longer we’ll keep doing this,” he said.

They’re looking for someone who would be willing to work into the farm and take it over, but with the market the way it is now, it’s not very promising.

The Roseberrys were in the first group of farmers in the late 1990s to convert to organic practices, which were close to what he had learned growing up on his parents’ farm in Massachusetts. What attracted them was the chance to make a decent living and the lifestyle of organic farming.

“We were never interested in getting big or bigger,” he said. “This gave us an opportunity to make a better living with the decent pay price.”

In the case of the Horizon Organic contracts, Maine’s organic milk is shipped either to Buffalo, New York, or a plant in Virginia. With the proliferation of organic dairy operations closer to existing processing plants, operators like Horizon Organic can cut some expenses by securing contracts with nearby farms.

Despite the years Roseberry has spent developing and improving his herd, its value is dropping because of the milk supply. The cows aren’t as valuable as they would have been a decade ago, he said.

His most valuable asset is the 300-acre farm that sits in the north end of Richmond not far from Interstate 295. There’s plenty of interest in developing his farm into house lots, but he’s not interested in that. Instead, he is talking to the Maine Farmland Trust about preserving the farm and coming up with different means of supporting the farm.

“There’s a lot more said than done,” he said.

Danone North America’s four-point plan, announced Monday, was detailed in a letter to state officials and dairy farmers. The plan would:

• provide the affected farmers the option to extend their current contract by six additional months, concluding at the end of February 2023

• offer to work with stakeholders, including state and federal government agencies, to explore investment solutions such as a co-op to address the hauling and transportation challenges or low- to zero-interest loans

In the letter, Chris Adamo, vice president for Government Relations, Policy & Partnerships for Danone North America, said the plan was designed to ease the impact of the transition.

The plan is “motivated by a genuine desire to create a greater window of opportunity for the farms, industry and governments to address the systemic challenges facing organic dairy in the Northeast,” Adamo wrote.

The Mills administration had asked in September that Danone North America commit to premium payments to farmers in the final year of their contracts as well as for the most recent contracts where premiums may not have been paid; donate money to the Northeast Dairy Innovation Center to support transition and business planning and investment; and make a substantial contribution to the company in Maine that will fundraise to set up in-state organic dairy processing.

In October, the Maine Organic Farmers and Gardeners Association, along with eight other organizations representing organic farmers and consumers across the Northeast, also sought a series of concessions on behalf of the organic dairy farmers affected. They asked for extensions on contract termination dates, severance packages or contract retirement package bonuses to compensate farmers for the investments they made that helped to build the Horizon Organic brand.

But they also wanted Danone North America to acknowledge its obligations as a certified B corporation, a designation that requires companies to meet social sustainability and environmental performance standards.

Roseberry said he would be willing to talk to the farm financial consultants offered by Danone North America and others.

“I’d want to talk to some people to go over different ideas and see how possible they are,” he said. “It would be nice to find someone who wants to work into this farm, but finding that person is pretty difficult at this point.”

As global warming heats up, humans will increasingly suffer from rising temperatures. But how will climate change affect cows?