Source: https://www.dairyglobal.net/Milking/Articles/2019/2/Price-fluctuations-decrease-in-dairy-market-389533E/
Share on twitter
Share on facebook
Share on linkedin
Share on whatsapp
Share on email
Comment
Trade wars, climate change and shrinking reserves. Many factors determine what the dairy market will look like in 2019. Those factors create uncertainty. Yet the market is expected to develop positively.
In the European Union, the drought in 2018 resulted in reduced milk production over the course of the last months of the year. In the autumn of 2018, the European Commission reported an expected production growth of approximately 0.8%. It should, however, be mentioned that production showed a growth of slightly more than 2%.
The milk production of many farmers in Northwest-Europe is under pressure in the first half of 2019, partly due to the forage supply situation. Photo: Galama Media

The growth turned out to be lower, due to the drought that affected the market only after that. Also in the first 6 months of this year milk production is expected to show little or no growth. Last year’s dry summer has resulted in disappointing corn and grass yields in comparison with previous years. The European Commission estimates an expected increase of slightly less than 1%. This growth has to be realised in the second halve of the year, as the lack of roughage will limit milk production in important parts of Europe during the first months of the year.

Figure 1 – Price of skimmed milk powder is increasing (in $ per tonne). 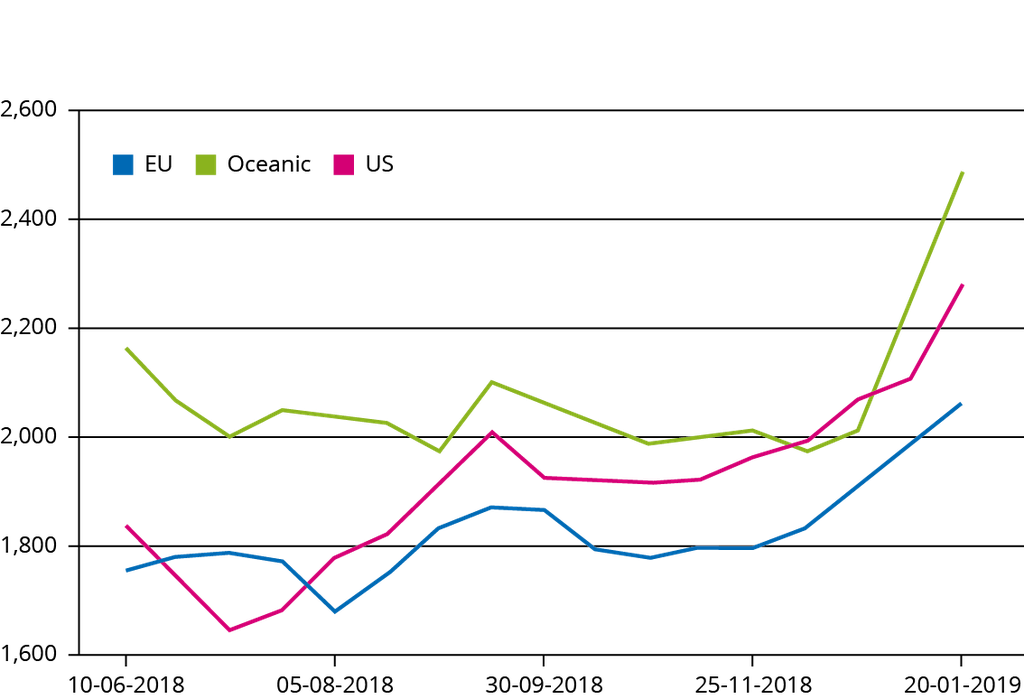 The European Commission expects a 4.5% growth compared to last year. This growth is largely the result of a growing world demand for European dairy products. This increase in demand for dairy products from the EU requires a growth in production. The European Commission expects a 0.6% growth in milk production in 2019, while also consumption within the EU will show a 0.7% rise. Current figures for 2019 show that demand is exceeding production. This offers hope of a good milk price within the European Union. The fact that intervention stocks of skimmed milk powder is as good as sold, reinforces the European market. Because of this, the skimmed milk powder market is less distorted, which has already led to higher product prices in the last weeks of 2018. The market price even passed the intervention level of € 1,689 per tonne. Even though the European Commission did not succeed in selling a product above this level, the fact that intervention stocks are sold does result in a better skimmed milk powder market (Figure 1). Also no further drop in butter prices is expected (Figure 2).

Figure 2 – No further drop in butter prices (in $ per tonne). 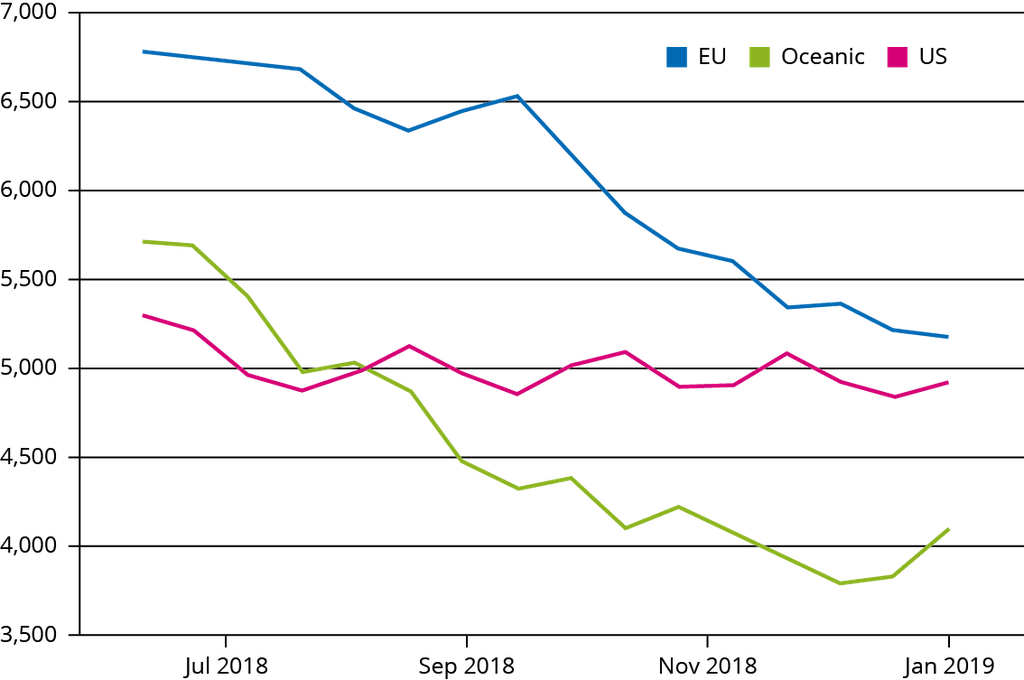 The policy of American president Donald Trump is creating uncertainty in world trade. This also has consequences for the global dairy market. First and foremost due to the exchange rate of the dollar. Currency markets are very sensitive and can contribute to the export position of the United States and other major players in the dairy market. Trump’s trade conflicts with China, Canada and Mexico don’t make the situation any clearer. These 3 countries are the main destination for American dairy. Yet, Trump’s actions do not appear to be hitting the United States too hard. In the third quarter of 2018 dairy export in total was 14% higher than it was a year before. This growth is mainly caused by an increased export of skimmed milk powder to Mexico and a strong position in the South-East Asian market. Despite the increase in total export, the US has also paid heavily. Cheese exports from America to Mexico has dropped by 11% in the third quarter of 2018. Dairy exports to China was hit hard in this period: a decline of 22%. How the United States will manifest itself in the dairy market this year remains uncertain. Dutch agrofood banker Rabobank expects the exchange rate of the American dollar and the availability of dairy products in the months ahead will determine the role of the US in the global dairy market in the next few years.

China remains an important export destination for dairy products. In 2019 the Chinese dairy import is expected to grow. In last year’s final quarterly report Rabobank speaks of an import growth of 11%. This is a 7% increase compared to previous forecasts. A moderate growth of Chinese milk production and a disappointing import in 2018 will probably lead to a substantial import growth this year. If Rabobank looks further ahead and says something about 2020, import growth is estimated at 4%. The fact that milk production in China lags behind expectations is largely due to the trade war with the United States. Chinese dairy farmers partially depend on American feed compounds. The trade war and the associated import tariffs drive up feed costs for dairy farmers. Rabobank estimates a 1% growth of milk production. That is less than previous estimates. Additionally there have been some modifications in the Chinese Statistical Year book. Between 2006 and 2017 milk production has been revised downwards by 15%. This shows the consumption was less than expected and there was a greater dependence on imports from other countries.

Milk production in New Zealand is on the rise, while growth in the US is dissapointing. Photo: Herbert Wiggerman 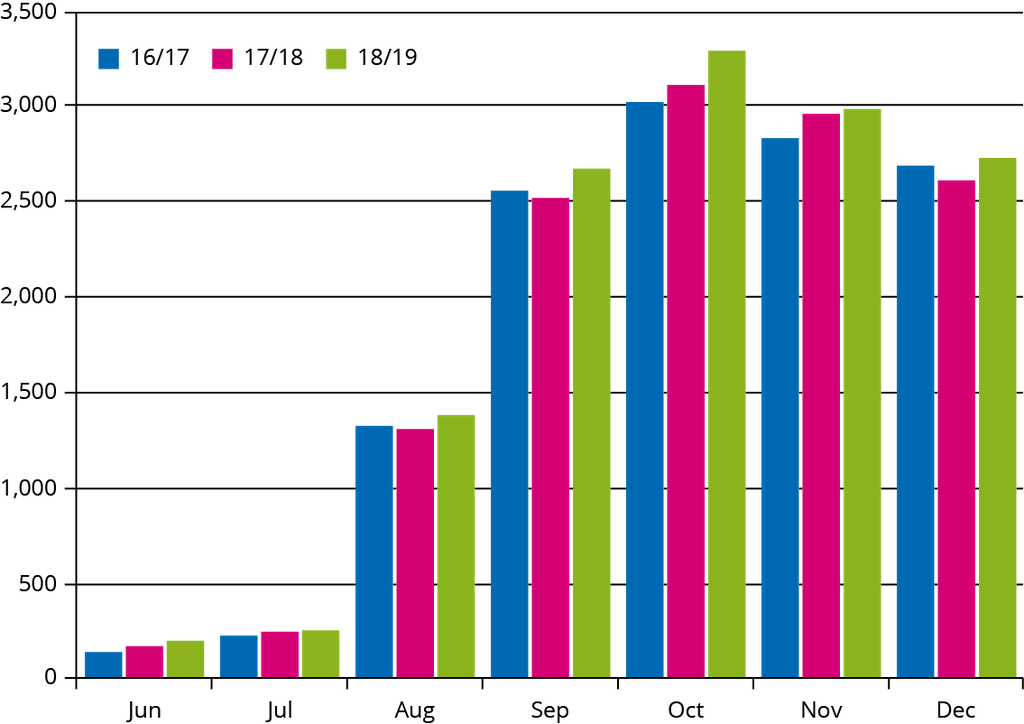 Russia aims at own production

The Russian import ban on most major players in the dairy market, increases the pressure on domestic milk production. The predictions for 2019 are that a production growth of 1% will be realised. This increase will primarily be the result of a major efficiency boost and genetic improvements, because while more milk is needed, the size of the dairy herd is slowly declining. It is clear that Russian milk production will increase in the years ahead. Significant investments are made in the construction of large dairy farms. Last year the government announced their plans to build 800 large dairy farms. The objective of the Russian government is to eventually become self-sufficient. Although Russia has no strong economic growth, Russian consumers have increasingly greater spending power. This will lead to an increase in consumption of healthy dairy products, according to the forecasts of Hexa Research, and American research firm. In the near future, the Russian growth is not a restraining factor to the global dairy market. Many exporting countries have demonstrated that the Russian market is closed to them. By circuitous routes products do find their way into Russia, but these volumes are nothing compared to total export volumes. On the other hand it will take time before the Russians will be able to enter the global market with dairy products.

We have turned the page to a new year. While 2022 has begun, we are still dealing with many of the same challenges that have been with us longer than we care to remember.