The prices reflect those paid or received for cows that have had at least one calf and are sold for replacement purposes, not as cull cows. The report does not summarize auction market prices.

Compared to the previous quarter, average replacement cow prices were up in 22 of 24 major dairy states tracked by the USDA (Table 1). The largest quarterly increases were in California, up $310, and South Dakota, up $300 per head. Only New Mexico saw a small decline from the previous quarter, down $50 per head, and the average price in Oregon was unchanged. 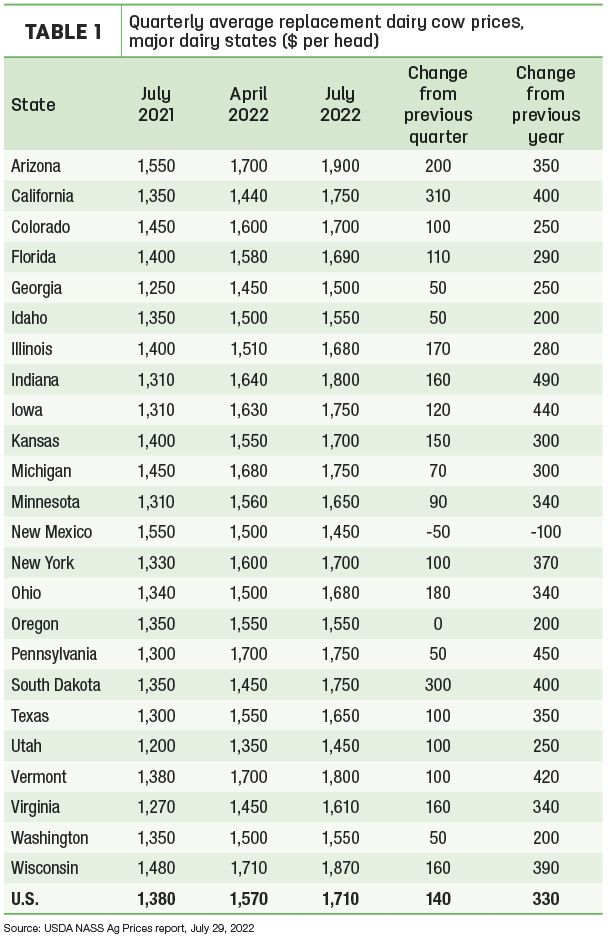 Compared to a year earlier, July 2022 replacement cow prices were up $400 or more in California, South Dakota, Vermont, Iowa, Pennsylvania and Indiana. In comparison, prices were down $100 in New Mexico, where cow numbers continue to drop.

Progressive Dairy’s Cattle Market Watch tracks dairy heifer prices from about 20 auction markets throughout the U.S., with price summaries updated about every two weeks. The listings cover top and medium springers, shortbred and open heifers, and heifer calves. In most of those markets, prices for all classes of Holstein replacement heifers have been mixed in recent weeks.

Meanwhile, U.S. prices received for cull cows (beef and dairy, combined) averaged $90.20 per hundredweight (cwt) in June, up $3.50 from May and the highest monthly average since September 2015. Through the first half of 2022, cull cow prices have averaged $83.20 per cwt, also a seven-year high.

The USDA’s monthly Milk Production reports indicate cow numbers have been growing over the first half of 2022. Despite that growth, the USDA’s semiannual cattle survey reflected a smaller number of dairy cows and replacement heifers to start the second half of 2022 compared to a year ago.

The semiannual USDA survey covers both beef and dairy cattle operations. Unlike the January report, the July data does not provide estimates for individual states.