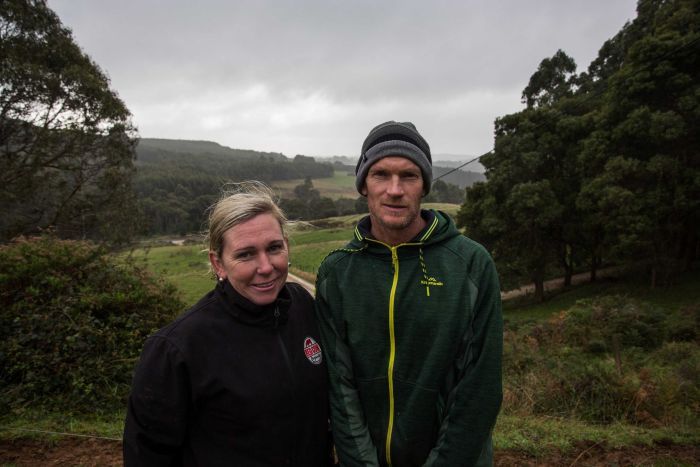 A growing band of Tasmanian farmers who want to adopt renewable energy wants the State Government to change the way its electricity transmitter, TasNetworks, charges for power usage.

The Agri-Energy Alliance is arguing farmers should benefit from lower power transmission costs if the electricity they generate from renewables is being used within their property, rather than being sent many kilometres from distant power stations.

The Alliance is pushing for rules to enable farmers to build micro-power networks on their properties, with one power source going to multiple power meters — current practice treats each meter separately even though many farmers would have more than one meter on their land.

Co-founder of the Alliance, Mark Barnett, said the change would be «relatively simple» but «revolutionary».

«Currently if a farmer wants to build a renewable energy source, say a set of solar panels, those can only service one meter,» he said.

«But farmers may have multiple power meters on their property, so rather than having to build multiple small solar installations for each meter, there’s a much better economy of scale if you can build one larger solar installation for the entire network on the farm,» Mr Barnett said.

«It’s sort of like you buy a tractor but are restricted in using that tractor on just one paddock, you should be able to use it on the entire farm.

«This is an idea that’s gaining traction among our farmers and also fellow farmers in Victoria.»

The Alliance has already gathered the support of more than 20 farming operations across Tasmania, and is set to launch its official lobbying campaign at Tasmania’s 2019 AgFest.

Mr Barnett said he hoped to involve «at least 200 farmers» in the lobbying effort.

«We are not asking for a massive infrastructure change, around 80 per cent I believe of the existing network in Tasmania could be modified simply by changing the way companies treat meters on the farms. It’s a pen and paper change.»

Andy and Matt Jackman are dairy farmers in Tasmania’s northwest, and run the Red Cow Dairy operation, which produces organic milk and cheese.

Ms Jackman said the annual power bill was more than $45,000, of which perhaps half was in «service fees» and transmission costs.

She said the farm wanted to move to renewable energy, but that it made little sense building six solar installations for the six meters on the property.

«We aren’t in a financial position to build six smaller solar installations, and they are less efficient.»

«I guess what we’re trying to do is reduce the amount of cost that is in the transfer charge, it makes sense to us to have that use of power on farm and the cost minimised when we are using it right here and we can directly feed it back into our own power source,» Ms Jackman said.

Mr Barnett said that if the Government changed the laws to recognise multiple meters on one property, then the Jackmans could save $6,000 a year in power bills and essentially reduce their transmission costs to zero.

«That could mean a saving of more than $20,000 a year, and for many farmers who are looking to move to renewables that makes a strong business as well as an ethical case.»

TasNetworks said in a statement that the organisation was committed to maintaining or reducing network charges where possible and was in the early stages of on-farm trials.

«We understand that the electricity market is changing and that customers and network service providers need to innovate and adapt in response to this,» the statement read.

«With this in mind, we are currently in the early stages of developing an on-farm trial that will investigate ways for farmers to potentially use energy more efficiently (micro networks) as well as removing multiple-metering points where possible.»

The ABC has contacted the State Government for comment.