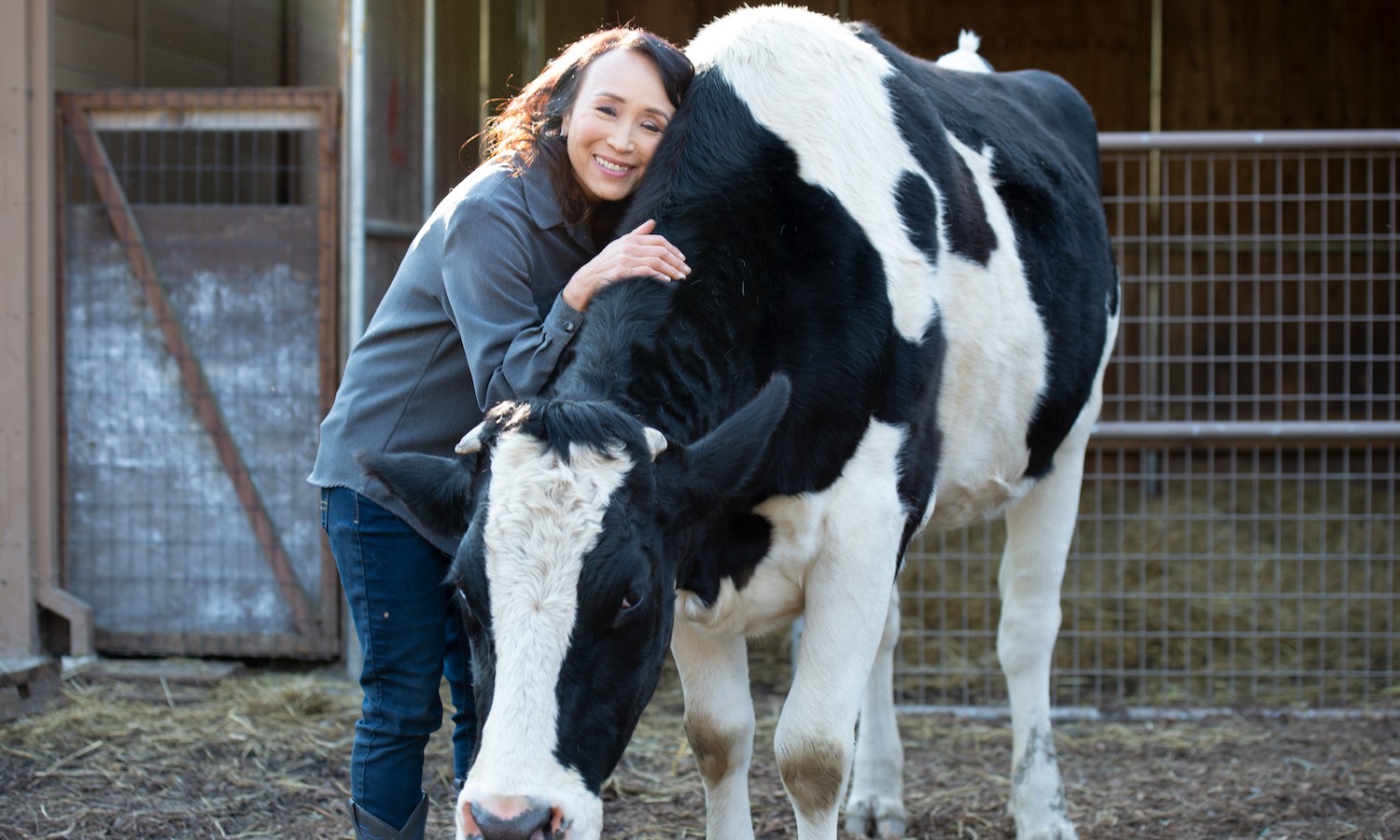 This is part one of a three-part interview series with Miyoko Schinner, CEO and Founder of plant dairy startup, Miyoko’s Kitchen.

Food Tank sat down with Miyoko Schinner and her two rescue dogs, Koan and Kaiti, in the office of her company’s 30,000 square-foot facility in Petaluma, CA. The first thing she wants to tell our readers may come as a surprise given her company’s mission to revolutionize dairy by “creating a new economy based on plants” instead of other animals.

“We want to help American farmers by going to ones who are struggling. The average dairy farmer makes US$30,000 a year.” Almost 3,000 dairy farms closed down in 2018 alone, and 42,000 dairy farms have gone out of business since 2000. Miyoko continues, “We’d like to partner with some of those struggling dairy farmers and actually help them transition to becoming our supply chain, to growing crops for us, such as potatoes. We need a very specific potato with a certain starch profile. We need farmers to grow those potatoes and we would help them monetarily transition… We would take the money out of our marketing budget to help them transition to a new livelihood and then they would have an ensured livelihood because they would be supply chain for us. These are some of the programs that we want to initiate over the next year.” Miyoko thinks it important to “have the courage to cross the aisle and talk to people who may seem like enemies.”

But why would a vegan cheese company want to reach across the aisle to help the competition? Well, because far from any kind of vegan utopia, Miyoko lives in Nicasio, California, or “ag land” as she calls it. In 2015 she started an animal sanctuary in the area called Rancho Compasión, where 70 rescued farmed animals now reside. Visiting the sanctuary, surrounded by ranches where animals are still raised for food, one realizes that Miyoko’s ideals live on the ground, where she builds upon current infrastructure to transition toward what she believes is a more compassionate food system.

Miyoko’s Kitchen is no different: the offices, R&D kitchen, and impressive production facility all sit right next to the corporate office for an animal-dairy company. In the parking lot, the pungent smell of cows comes from nearby farms.

As an ethical and political vegan, Miyoko believes that “the dairy industry is ugly,” forcibly separating calves from their mothers at birth and keeping cows in a constant cycle of pregnancy and lactation for five years, then selling them for hamburger meat once they’re “spent.”

Miyoko explains: “and I do speak out about it, but I don’t want to call the people in the industry evil or bad. It’s the practices, it’s the industry… The fact is the people in the industry, such as the farmers in my neck of the woods, a lot of them consider themselves to be good people. They’re good Christians who are just feeding America, just doing what their ancestors have done. This is how people have eaten in the Western world for a long time. So now their livelihood’s being threatened; they believe by people in our sector. And so rather than being the threat, I want to show them that we’re the solution. I want to show them that this is coming from a place of compassion.”

Miyoko recalls one particular rancher from whom she rescued Angel, a former dairy cow who is now a lifetime member of Miyoko’s extended interspecies family at Rancho Compasión.

“I was speaking to this rancher and he said, ‘Yeah, I just couldn’t retire. I kept putting off retirement because I kept thinking if I retire, how am I going to feed America?’”

“To him, he was feeding America…He was doing the good deed. There are a lot of people like that. There are of course the more conniving ones that are bigger. But a lot of the smaller farmers selling their milk to the co-ops are just farmers trying to pay their bills and struggling. And so why not partner with them? Why not transform America that way? Why not tell that story to inspire Americans?”

“That’s how I look at revolutionizing things on a true scale, not just ignoring them and saying, ‘Well, we’re going to bulldoze over you and create a new economy that’s based on plants. So screw you.’ That’s not the approach we want to take. How can we actually revolutionize the entire dairy landscape? We can revolutionize by helping farmers transform their dairies into new enterprises and then we’re helping ourselves and we’re helping them. We’re helping the world.”