eDairy Market | The most expensive cheeses in the world

eDairy Market | The most expensive cheeses in the world

Cheese, one of the most loved creations by humans and some animals. It is so universal that everyone has tasted this delicacy at one time or another. But just as we eat it in one sitting, it actually takes a lot of hard work, as it involves many processes, and sometimes takes years.

The origin and rarity of the ingredients used in its production, the difficulty in its elaboration or the duration of its maturation are some of the factors that can influence the price of a cheese, and so we find cheeses that cost little less than a caviar, a wine or a French champagne.

eDairy Market today presents the 12 most expensive cheeses in the world: 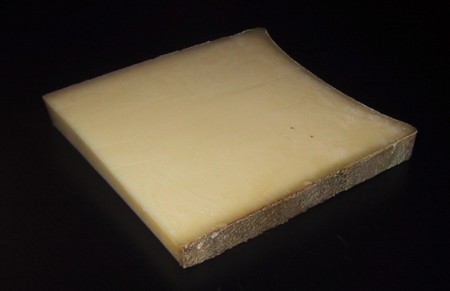 Referred to as “The prince of cheeses”, Beaufort is one of the most famous cheeses in the world. It takes about 500 liters of milk to make a single wheel of this cheese, which weighs about 45 kilos.

Beaufort is ripened in an environment with 92% humidity, with a temperature below 15 degrees and for a minimum of 18 months, resulting in a fruity, ivory-colored cheese with nutty, buttery and dry grass flavors.

The milk to produce this cheese comes from the Beaufort breed of mountain cows in the Haute Savoie region of southeastern France. The production of this cheese is not new, dating back 2000 years, before the Roman occupation of France, until 1976 when the French government granted it the protected designation of Beaufort AOC.

Its price is around 80 euros per kilo. 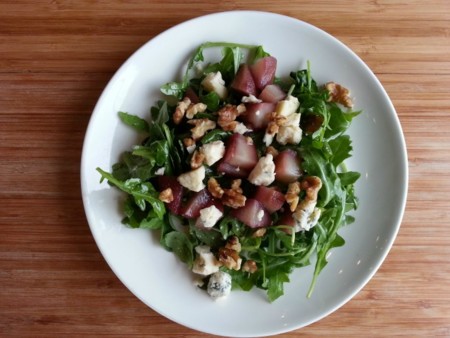 Winner of the 2009 Best in show at the American Society Awards this cheese made from raw cow’s milk, blue type with a beautiful natural rind, is aged for a minimum of one year. The cheeses are rotated during this time several times a week and the aging process occurs in caves similar to those used to age Roquefort.

The flavors of this cheese range from woody hints of pine to wild berries, mushrooms and pears. Each is wrapped in vine leaves harvested in the Rogue River Valley, and add additional complexity to its flavors, as well as protecting its creamy, moist texture.

It is priced at around 87 euros per kilo. 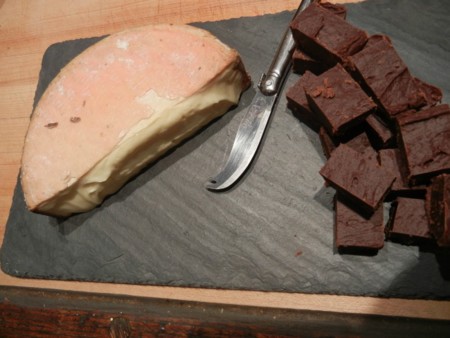 In 1998 brothers Andy and Matthew Kehler bought the dilapidated Jasper Hill Farm in Vermont and gradually took over a herd of Ayrshire heifers. After careful management and excellent choice of herd genetics, they now have one of the highest quality milking farms in the United States.

The milk of the Ayrshire cow has exceptional cheesemaking properties due to its ratio of protein to fat, resulting in Winnimere, a washed rind cheese that is matured for two months and brushed regularly with a local style beer.

Each Winnimere cheese is surrounded by a strip of spruce bark, which helps maintain its shape and imparts woody aromas, although almond and grassy flavors are also evident.

Its price will be around 80 euros per kilo. 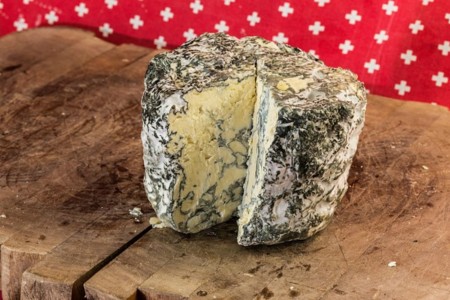 Produced in Switzerland with milk from Jersey cows, this dome-shaped blue cheese is initially aged in cellars and pressed in veined molds that shape the cheese so that the blue molds that will invade it can develop there.

Blue Jersey has a rich texture, with a slightly rancid aroma at first, which becomes slightly spicy once cut, but maintains the earthy flavor of the raw milk.

It is priced at around 80 euros per kilo.

This cheese of Italian origin, specifically from the Campania region, is made with raw cow’s milk from a rare breed, the podolica. The diet of these animals in the Italian mountains is based on nettles, blueberries, wild strawberries, rosehips, hawthorn, juniper and cherries, flavors that can later be tasted in the cheese.

It is a pasta filata style cheese, as the curd is stretched into a ball. This cheese has an unusual shape because the young cheeses are tied with a string to make a neck and then suspended on a wooden rod to mature.

The ripening is for three months to a year in the shepherds’ mountain hut and its original name seems to come from the traditional method of transporting them as saddlebags on the flanks of horses.

Its price will be about 85 euros per kilo. 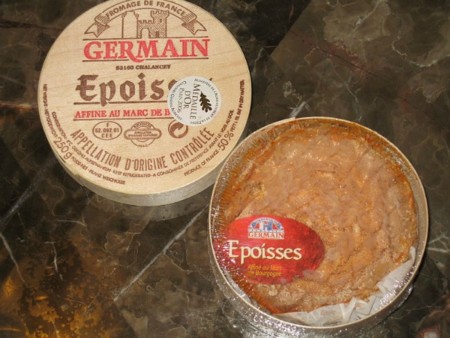 This French cheese from the Burgundy region is one of the best known washed rind cheeses. The first cheeses of this variety were created by monks of the Abbey of Cîteaux in the 16th century. It was one of Napoleon’s favorite cheeses and reached its peak during the middle of the 19th century, although it practically disappeared during World War II, resuming its production during the post-war period and obtaining AOC recognition in 1991.

This cheese is made with raw cow’s milk following a complex artisan process. The rind is first washed with salt water, then it is kept in a damp cellar and after a month it is washed again with rainwater and a brandy called marc de Borgoña, two or three times a week. It matures for up to two months.

Cylindrical in shape, with a bright orange rind and a flexible and unctuous paste. Its main characteristic is its strong, pungent and penetrating odor that made it forbidden to take it on public transport.

Its price is around 80 euros per kilo. 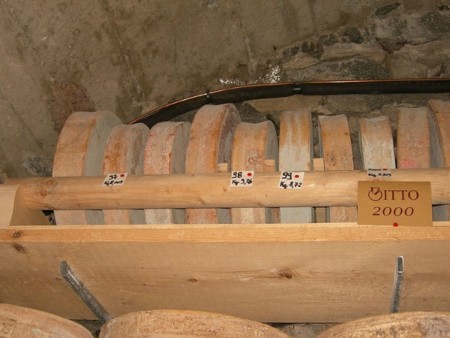 This cheese of Italian origin was introduced in Hong Kong by an importer, managing to sell it at an exorbitant price despite the fact that such mature cheeses are not to Asian taste.

Now Bitto is a cheese made from a combination of cow’s and goat’s milk, although it is not an easy cheese to make as it takes 10 years to mature. First produced in 1997 from a very long production process it is now sold all over the world.

Its price is around 255 euros per kilo.

Old Ford cheese is a semi-hard cheese made from raw goat’s milk. In the summer, when temperatures are warm, it needs three months to mature completely, while in autumn it needs up to eight months to complete this process, achieving an intense and denser cheese than that of the spring season.

Made by Mary Holbrook in Great Britain, it has a firm, earthy texture with floral tones that tickles the tongue, with a crumble-like or sandy brownish crust and a snow-white interior, 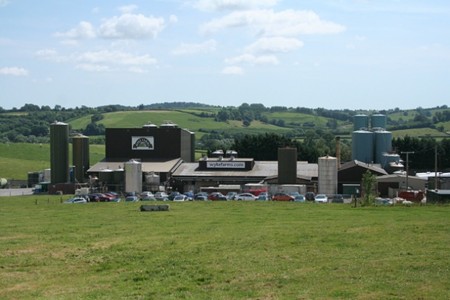 A classic aged cheddar, with the addition of white truffle and gold leaf, which raises the price outrageously. Made by Wyke Farms in Somerset in the UK, this cheddar has won numerous awards and is considered a luxury item to add extra flavor to many foods.

Its price is around 340 euros per kilo. 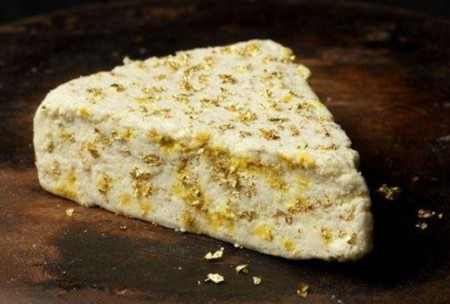 A Stilton cheese to which edible gold has also been added, and is therefore considered one of the most expensive varieties in the world. Manufactured by Long Claawson Dairy in Leicestershire, this limited Christmas edition has been one of the star cheeses of celebrities and millionaires.

Almost 97 times more expensive than a classic Stilton, in this special edition cheese you can see the deposits of edible gold when a cut is made.

Priced at €765 per kilo, it is not a cheese for everyone. 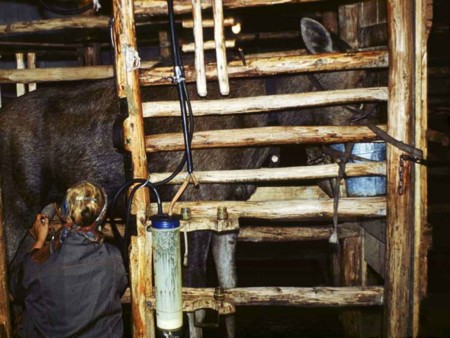 The Moose House at Bjurholm in Sweden is known for its moose dairy, the only one of its kind in the world. There are only three moose that give milk for this exquisite variety of cheese, one of the most expensive in the world. Whose milk can only be milked between May and September, which implies an even more exclusive elaboration with a production of 240 kilos of cheese per year.

Its price is around 773 euros per kilo.

One of the most demanded cheeses in the world is this variety made from Balkan donkey milk. Only a few specimens of this species are available in the world, in the area of Zasavica, so it is an expensive and rare cheese, since up to 25 liters of milk are needed to make it, which yields only one kilo of cheese.

Its price is around 979 euros per kilo.

Would you be willing to pay for these cheeses?