Dairy | The New Cash Cow: How Solar Can Save Dairy Farms 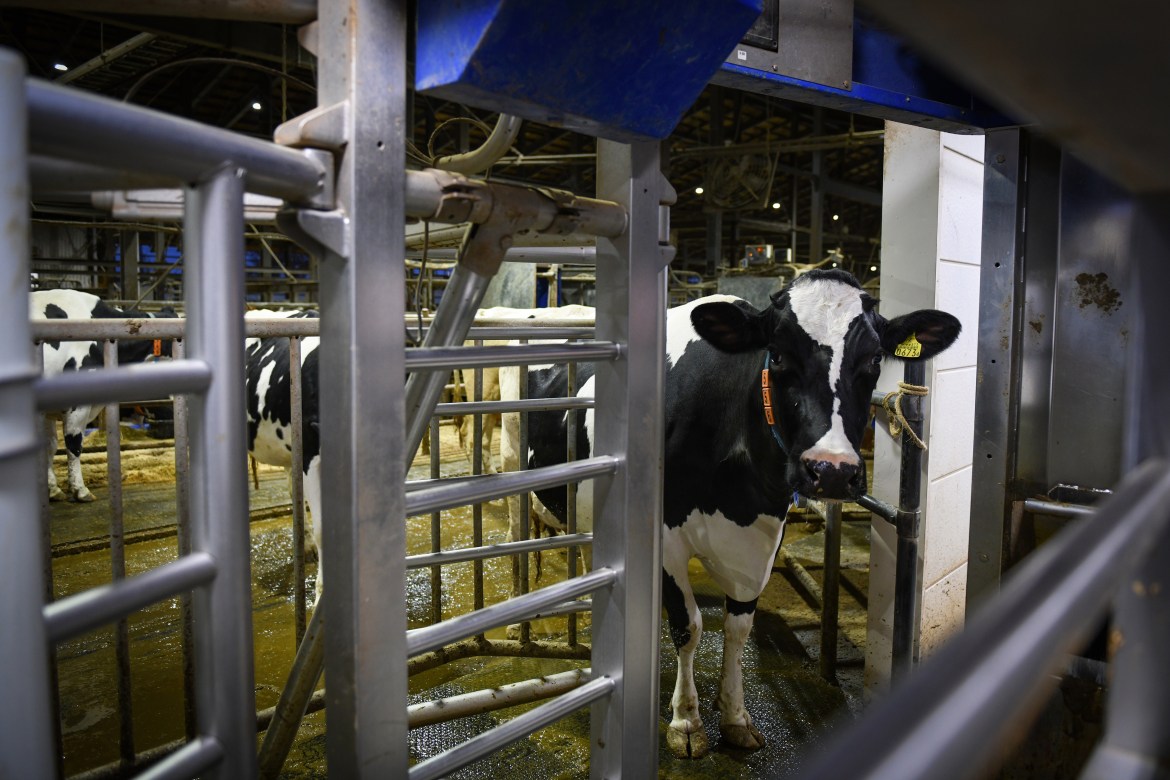 Noriko Hayashi / The New York Times
A cow, wearing a sensor that signals to robots when its time for milking, ambles towards a milking machine at the Kalm dairy farm in Ebetsu, on Hokkaido, Japan, Nov. 7, 2019. With a declining population and workers in short supply, Japan has fully embraced robots, but getting them to work to ‘the standard of humans’ is often a challenge. (Noriko Hayashi/The New York Times)

Borden Dairy says that tumbling milk consumption combined with the rising price of milk crippled them with debt. In addition to these two large bankruptcies in the dairy industry, more than 2,700 small-and-mid-size family dairy farms went out of business last year and 94,000 have stopped producing milk since 1992. Consumption has been dropping steadily, with overall sales falling by 13% in the last decade. It seems that many Americans are moving on from cow milk.

Carilynn and Curtis Coombs, who own a family dairy farm in Smithfield, Kentucky, just received unwelcome news. It came in the form of a letter from Dean Foods, which used to buy their milk but just went belly-up: “While we greatly appreciate all your hard work and the milk you have provided to Dean Foods throughout the years, I regret to notify you we must cease purchasing milk from your dairy farm. Our agreement will end in 90 days.” The Coombs family, as well as tens of thousands of other dairy families, are now looking for something else to help keep bread on the table.

While the dairy industry is tumbling, the solar energy industry is skyrocketing. Global demand for solar energy has tripled over the past six years, according to Goldman Sachs. This is partly because institutions, including Cornell University, and companies such as Lyft and PepsiCo are making pledges to be net-carbon neutral. The Financial Times writes that “companies are racing to burnish their green credentials,” citing Amazon’s recent pledge of net zero emissions by 2040 and 100 percent renewable energy from 2030. The fight against climate change has reached a watershed moment: consumers are demanding clean energy and companies are responding. This represents an extraordinary opportunity for landowners, especially these dairy families, to consider farming sunshine.

Last semester, I took a class titled “Farm Business Management.” We took a field trip to E-Z Acres, a 2,500 acre, 680 cow third-generation dairy farm situated in the Finger Lakes region of New York. One of my classmates asked Mike McMahon, the owner, to tell us the single greatest challenge to his farm. Mr. McMahon responded: “climate change.” He then spoke at lengths about the extreme weather that has been ravaging his farm, which Alan Sano, a farmer on the West Coast, details in a New York Times article titled “Farmers Don’t Need to Read the Science. We Are Living It.” In addition to showing me first-hand the struggles of a dairy family in today’s economy, the conversation with Mr. McMahon made it clear that some farmers are acutely aware of climate change.

My time at the farm gave me the idea for a term paper, in which I proposed installing solar panels on 125 acres of this 2,500 acre dairy farm. I analyzed the profitability of two different options: cash rent, in which the landowner leases the land to a solar developer for a flat rate, and fixed product rent, in which the landowner and the solar developer share in the revenue generated by the electricity sales.

According to the World Bank’s Global Solar Atlas, a 125 acre, 18 megawatt solar farm in Upstate New York has a total photovoltaic power output of 22.519 gigawatt-hours, or 22,519,000 kilowatt-hours, per year. This power output serves around 3,000 average American residential homes. In terms of electricity sales, which run at $0.05/kWh in the Northeast, E-Z Acres would yield $1.1 million a year in revenue. Farming solar on the entire 2,500 acre property would power around 60,000 average American residential homes and generate $22 million a year. Under fixed product rent, the landowner and the solar developer share these sales.

The graph below shows solar power potential across America. According to the World Bank software, solar farms in the Southwest and across the Atlantic Coast generate 30 percent to 50 percent more electricity than solar farms in Upstate New York, per acre. Because of this, I don’t think that the E-Z Acres analysis captures the full potential of solar power as an energy source for America and as a source of revenue for families and companies.

Nearly a century ago, Thomas Edison imagined tapping the inexhaustible power of the sun: “I’d put my money on the sun and solar energy. What a source of power! I hope we don’t have to wait until oil and coal run out before we tackle that.” Today, harnessing that energy — along with the power of wind, water, and the earth’s heat — has become a reality as consumers are demanding clean energy and companies are responding with carbon-free pledges. Technological and financial innovations have brought renewables into the mainstream, and I think that the resulting transformation will lead to energy savings, reduced carbon emissions, greater energy diversification and job creation for folks like Carilynn and Curtis Coombs.