The Align team started its transition to the half-and-half trial four years ago on its Clareview farm sowing diverse pastures and removing synthetic nitrogen altogether from the regenerative paddocks.

They replaced superphosphate with guano and began using a liquid brew that includes fish fertiliser, humates, fulvic acid, other micro nutrients such as boron (Bo) and Molybdenum (Mo) as well as effective microbes (EM) – a kind of soil probiotics.

Last season was the first full year of data collection for the study. Align chief executive Rhys Roberts says financial returns from the regenerative side of the trial were disappointing and changes to grazing management of diverse pastures will be made this spring and summer in the hope of rectifying that this year. There’s even some consideration being given to adding in a little nitrogen if other tactics don’t work.

Profit or earnings before interest and tax (EBIT) per hectare for the regenerative area in 2021/22 was $1651/ha less than the $6943/ha earned on the conventional area of the farm. Rhys says much of that difference was due to increased supplements used on the regenerative side to combat poor autumn growth.

“We were very focused on sticking to the regenerative grazing principles of long grazing rounds, but in retrospect the quality of the diverse pastures suffered as a result.

“We’d been hurt the previous season by not leaving a high enough closing cover on the regenerative side at the end of the season so last season we knew we had to close out with about 2200kg DM/ha.

“To do that and get the milk production we were after we had to bring in more supplement.

“At first glance of the data you’d say late season pasture production and milk production is the whole issue.

“But we’re thinking that, given production yield on the diverse pastures is substantially more than the conventional over the October to February we need to shorten up the grazing round length a little over that period, lift pasture quality and get more milk early.

“That’s going to take the pressure off the farm system at the later end of the season.

“So we’re going to target a 25-day round rather than 30 days – last season we never dropped below 30 days.”

Align has modified its view on what constitutes an ideal diverse pasture too, moving away from what it calls the hyper-diverse swards containing 20 or more species to one that contains 8 -10.

“The issues we’ve had with them is that they a just too variable either from paddock to paddock or within a few days for the same paddock in that you can see a huge drop or increase in drymatter over just a few days if you get a frost for instance or a burst of really hot days.”

They make up four of the bottom five producing paddocks on the whole of Clareview.

“It shows you that a sudden wholesale cut in nitrogen across New Zealand could be severely detrimental to production if you didn’t put more diversity into pastures – get the clover up at least.

“It’s also very clear how we got to the point as a country of using a lot of N (urea).

“The problem is as farmers we carried on thinking it was going to be linear but it’s not.”

Rhys says if they can’t get better milk production over the late spring and summer through their altered grazing management the team have been discussing the possible use of 10kgN/ha in February as Calcinit – 15.5% N and 19% calcium (Ca).

It’s fully soluble and could be applied with other nutrients in the regenerative fertiliser programme through fertigation via the Tow and Fert.

“It’s not something we’ve settled on yet – the last thing we want is to get five years down the track of this study and people discount all our findings because we added nitrogen in one year.”

The Overseer N loss number is 33kg/ha/year – almost half that of the conventional side’s 65kg/ha/year.

For every 1kg N lost on the regenerative side 38kg milksolids (MS) is produced making it significantly more efficient than the conventional side which produces 25kg MS/kg N loss.

Heading into this season Rhys says, cows have wintered exceptionally well this winter on diverse pastures at Align’s support block near Methven with the regenerative herd wintered on 12kg DM/cow/day of diverse pasture plus 2kg straw coming back at body condition score (BCS) 5.3 and the conventional herd, wintered on 12kg DM/cow/day Kale and 2kg straw coming back at BCS 4.8. Per cow production is expected to be close between the two groups and although the lower stocking rate on the regenerative side means less total income, lower costs should mean profits are targeted to be within $174/ha of each other. 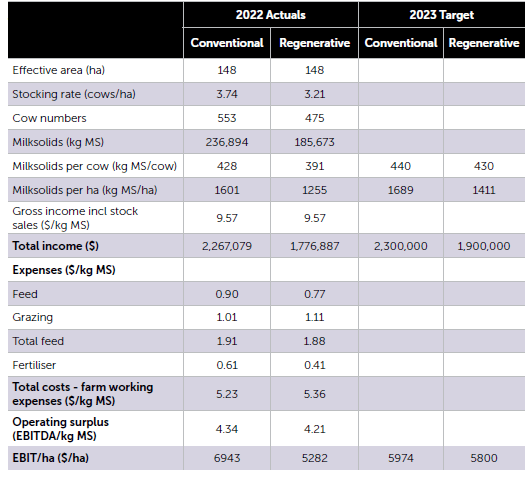