Dairy | Wisconsin loses more dairy farms in 2021, with the total down by a third since 2014

Dairy | Wisconsin loses more dairy farms in 2021, with the total down by a third since 2014

It’s not just a creamery that distinguishes Uplands Cheese from much of Wisconsin’s dairy herd. The cheese plant, located in the state’s Driftless region, employs three to 10 people, depending on the season.

“My farm is really different than most farms in my area,” said Scott Mericka, who co-owns Uplands and the affiliated Grass Dairy farm. “But we take advantage of a lot of the services our neighbors do. We have a really strong farm economy, so everything I need to run my dairy farm is at my fingertips.”

Mericka is among a cluster of what have increasingly come to be smaller-scale farmers pursuing a new roadmap for milk and cheese businesses. Many dairy farms around Wisconsin continue to be walloped by the economics of agricultural consolidation.

The Wisconsin Field Office of the U.S. Department of Agriculture’s National Agriculture Statistics Services publishes monthly figures that track various elements of the state’s dairy industry. One key set of numbers is the number of milk cow herds, a measure for the total number of dairy farms in the state. 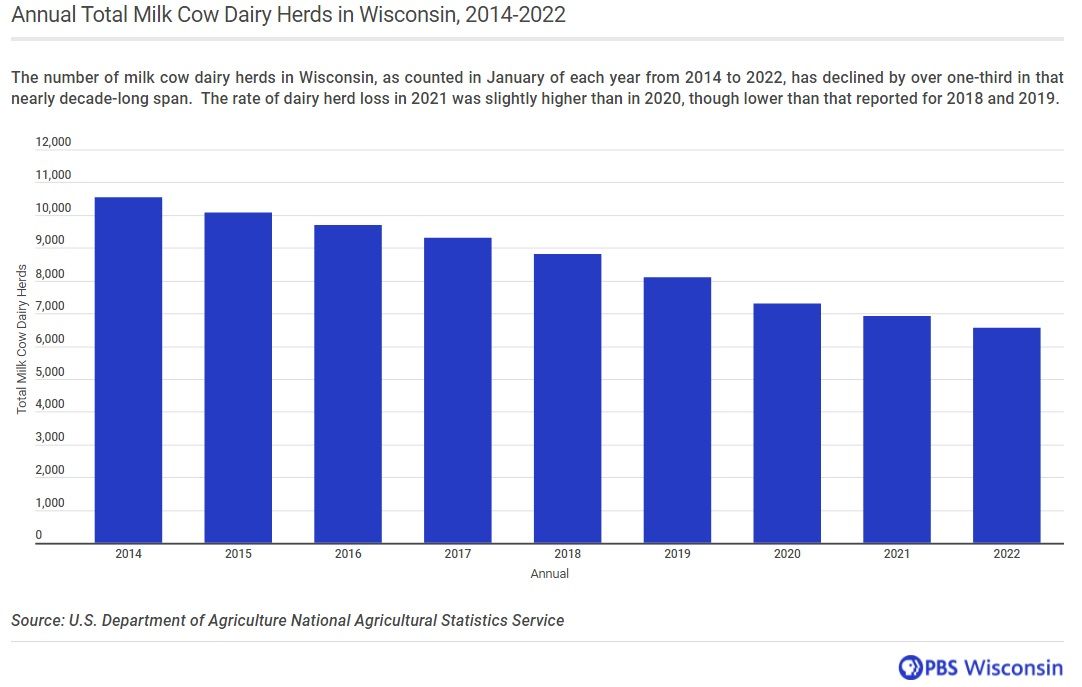 Over the same time frame, and even just over the course of 2021, the total number of milk cows in the state has held fairly steady, ranging between roughly 1,260,000 and 1,280,000. That measure hasn’t changed much over the past two decades, following a longer-term decline in the state’s milk cow population from the peak numbers reported in the mid-20th century. 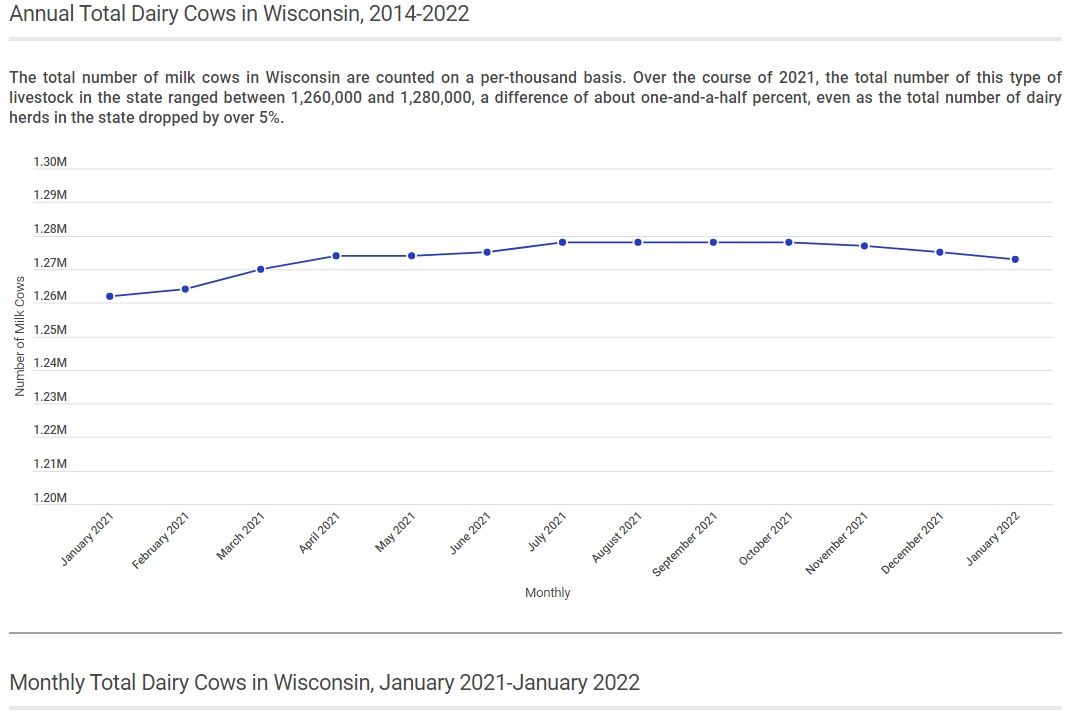 These two sets of numbers illustrate how Wisconsin’s dairy industry is continuing a significant transformation: While the number of dairy herds in the state is declining as the number of cows doesn’t, that means those farms that remain are getting bigger and bigger on average.

Mericka predicts farms will continue to get larger. Indeed, a milking operation can grow to as many as 8,000 cows, as is the case for one Kewaunee dairy farm that unsuccessfully sought a permit to nearly double in size.

In 2021, the state hit a new high in milk production — an annual average of 24,884 pounds of milk per cow — despite a decline in the total number of dairy herds. Mericka warns that overproduction of milk is hurting both farmers and consumers.

“There’s no advantage to the farmers in overproducing milk,” Mericka said. Yet it’s a self-perpetuating cycle where “farmers can be their own worst enemies,” he added.

“Big isn’t bad — consolidation is bad,” declared Mericka. “I’m concerned about the lack of opportunity for farm ownership for young people,” he said.

Kevin Krentz, president of the Wisconsin Farm Bureau Federation, explained the aging base of farmers.

“[Farming] is a tough business with tight margins and a lot of assets, liability and debt,” he said.

At an average age of 58, farmers invest their livelihoods into their farms with the hope of passing it along to future generations, but that is not always an option.

Krentz added that some farmers don’t have retirement investments, and when land values rise, many decide to sell their holdings and retire.

The real estate value of farmland in the United States increased by 7% in 2021, reported the USDA, while the value of pasture land rose by 5.7%. In Wisconsin, the average pasture value in 2021 was about $2,520 per acre, higher than the national average of $1,480 per acre.

“There’s less of that next generation taking over for farmers, so they ultimately end up selling it elsewhere, either to other farms, or to other businesses, especially around urban areas,” Krentz explained.

“There’s a number of green energy products coming into Wisconsin, solar and wind, where they can lease out or sell that land, but ultimately it takes it out of production,” Krentz added. “Those are just a couple of scenarios that have led to some of that lower total land acres out there.”

Marc Stephenson, director of the Center for Dairy Profitability at the University of Wisconsin-Madison, said “agriculture is not a bad news story,” though, and the news is not all bleak.

“We’ve had troubling times, and even now, this year looks like a year of good milk prices for dairy farmers. On the other hand, it’s also a year of increased costs of production,” Stephenson said.

Though the pace of dairy farm closures in Madison slackened somewhat during the pandemic, COVID-19 caused changes in consumer behavior that could have ongoing effects.

“That really, really disrupted the whole supply chain last year, all the way to dairy farms having to dump milk because the industry or that supply chain could not change because there wasn’t a place to put it,” Krentz said.

As supply chain shortages snarl global markets, one focus for the Wisconsin Farm Bureau Federation is reducing tariffs on imported fertilizer as farmers deal with inflation, which hit a 40-year high in January 2022.

Krentz also pointed toward the effects of human conflict on the global agricultural economy.

“The war in Ukraine has definitely disrupted things and made things challenging for agriculture, but there’s also some opportunities there with ups and downs in the market,” he said. “Farmers have that ability to protect themselves, being able to sell high on a day that some markets are going up and being able to buy some products on a day that some things are down.”

“Globally, some of our products here are very cheap, so that’s what’s also helping those products move out of this country,” Krentz added.

Amid all of these crises, the dairy industry continues to witness a shift in consumer attitudes toward its products.

“Consumers want to know where their food is produced nowadays,” Krentz said. “I see a huge growth opportunity moving forward for agriculture,” citing specialty cheeses as an example.

As a specialty cheesemaker, Mericka expressed concerns about the future of the dairy industry, both its economic determinants and consumer attitudes.

“I don’t have a lot of faith [in] where things are going,” he said. “It’s just been a culmination of the years and noticing that the solutions are in our hands. If we stopped overproducing milk, and we produce the milk that the consumer wants, then we succeed.”

Stephenson does not not think consolidation is a big problem for consumers, other than a typical perception of what a dairy farm might look like — an idyllic, small red barn with a white trim, cows and green pastures.

“We still have some of those farms, but increasingly, milk production is coming from much larger operations,” he said.