Saputo | Saputo Aims To Double Its EBITDA By 2025

Saputo | Saputo Aims To Double Its EBITDA By 2025

Saputo is one of the largest dairy processors in the world, but sees labour shortages and supply chain issues pressure its margins. Prices are being hiked right now, and this should protect the margins going forward. The management is guiding for an EBITDA exceeding C$2.1B by 2025, and that's a very ambitious target.
Compartir en twitter
Compartir en facebook
Compartir en linkedin
Compartir en whatsapp
Compartir en email
Comment

Saputo (OTCPK:SAPIF) is a major producer and distributor of dairy products including milk, cheese and cream products. Headquartered in Canada, Saputo is one of the top-10 dairy processors in the world and even is the largest processor in Australia and a top-3 player in the US cheese market. Saputo’s main shareholders still are the Saputo family, which usually adds a layer of safety as the family shareholders wouldn’t want to jeopardize the family capital.

As Saputo is a Canadian company, I’d strongly recommend you to trade in the company’s shares using the Canadian listing. Saputo is trading with SAP as its ticker symbol on the Toronto Stock Exchange and, with an average volume of in excess of 600,000 shares per day, the TSX listing is by far the most liquid listing for Saputo. Unfortunately, the company’s IR section on the website contains download-only links, but you can find all relevant information here.

Saputo’s H1 results were a bit weaker than expected

Although the demand for dairy and cheese products remains strong, Saputo posted a relatively weak set of results in Q2 and the first half of the year, and the company is blaming supply chain disruptions and labour shortages for a large part of its poor performance. Additionally, inflationary pressure also had a negative impact on the company’s margins in the first half of the year; and although the revenue remained stable, the EBITDA decreased sharply in the second quarter. And although the share price initially increased by about 25% since my previous article on Saputo was published, the current share price of C$28.40 is about 30% lower than its 52-week high as the market has been underwhelmed by the results so far.

Keep in mind, the average tax rate of about 44% in the first half of the year does not represent the normalized tax pressure; the 24% in the second quarter seems to be a more realistic longer term tax rate. The higher tax rate in Q1 is entirely related to the company having to record an increase in deferred income tax liabilities due to a reformed tax system in the United Kingdom where the corporate tax rate will increase from 19% to 25% on April 1st, 2023. This increased the tax bill by about C$50M and on an adjusted basis, the H1 net income would have been just over C$200M or C$0.49 per share.

That’s still not great for a stock trading at in excess of C$28/share and the margins are very clearly suffering from the aforementioned elements. 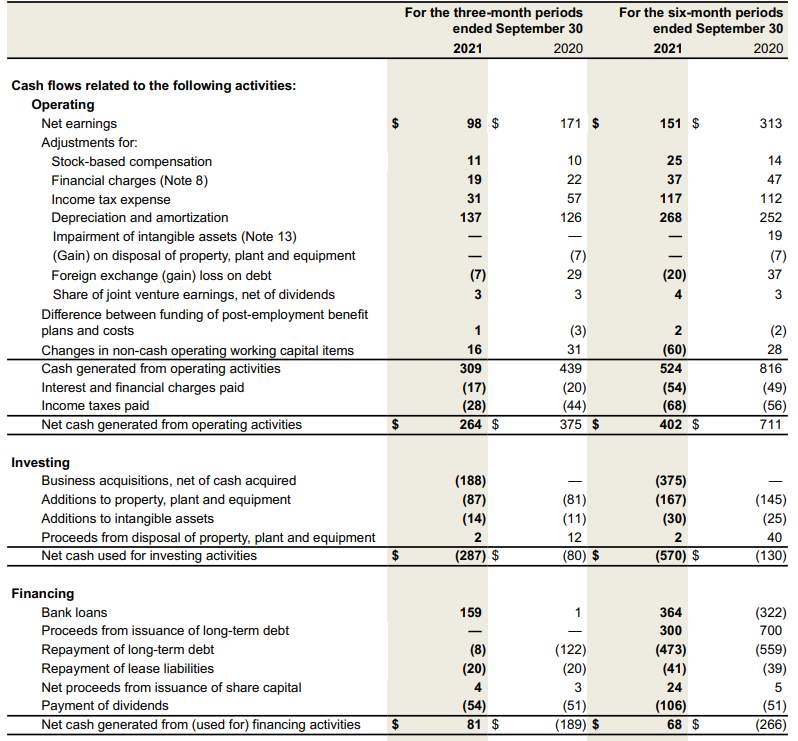 The net debt is high, but decreases fast

Saputo has been pretty active on the M&A front in the past few years, and as a direct consequence, the net debt has increased. As of the end of September, Saputo had C$222M in cash and about C$734M in short-term debt on top of the almost C$3.1B in long-term debt for a total net debt of approximately C$3.6B. That’s the net financial debt and excludes the almost C$500M in lease liabilities.

Although the EBITDA result in the first half was clearly disappointing with an EBITDA of just C$573M, the net debt versus EBITDA ratio will likely remain pretty manageable at around 3 by the end of this year. That sounds relatively high but keep in mind Saputo just completed a C$375M cash acquisition, and the EBITDA has been under severe pressure due to the aforementioned inflationary issues and labour and supply chain issues. Just to provide a fair comparison: the H1 2021 EBITDA excluding lease payments was approximately C$700M for an annualized result of C$1.4B.

These acquisitions fit in nicely with Saputo’s plans for 2025 where it plans to enhance its profitability while growing the company. 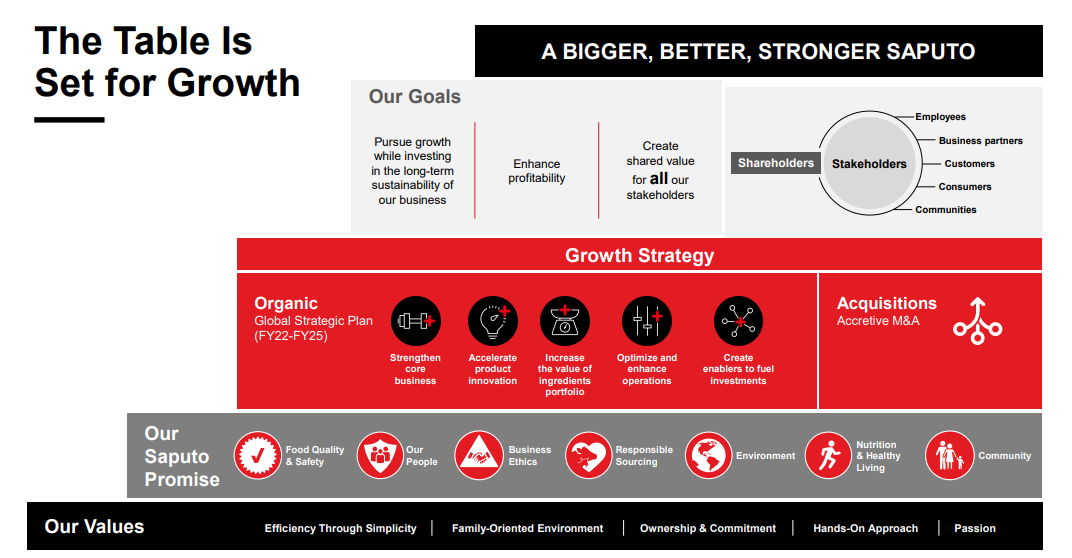 This should result in an EBITDA of in excess of C$2.1B by 2025 (which is in 3.5 years). That’s a very ambitious target and I hope the company’s management can deliver on this promise.

In order to reach that EBITDA number, Saputo aims to spend about C$2.3B in capex in the 2021-2025 era, so we can expect the capital expenditure level to increase. This will make the reduction of the net debt level less likely, but the debt ratio should trend in the right direction anyway as the higher EBITDA result should improve the net debt ratio as well.

Buying Saputo right now is basically a bet on the management being able to pull off its EBITDA guidance of in excess of C$2.1B by the end of FY 2025. That’s a 40% increase compared to the FY 2021 EBITDA result, but it would mean an increase of more than 100% compared to the annualized EBITDA in H1 2022. I hope Saputo can deliver on its promises, but it will have to get a grip on its margin pressure sooner rather than later.

On the conference call, Saputo confirmed it took some pricing actions to offset the inflationary pressures, so I hope we will see at least a stabilization and hopefully a small improvement in the Q3 margins, followed by a margin expansion again in Q4.

I currently don’t have a position in Saputo as the impact of inflationary issues is a little bit worrisome and I’d like to see the company getting a better grip on the situation before going long.